Kawah Buku > History > Malaysia > The Towns of Malaya: An Illustrated Urban History of the Peninsula up to 1957
Out of stock 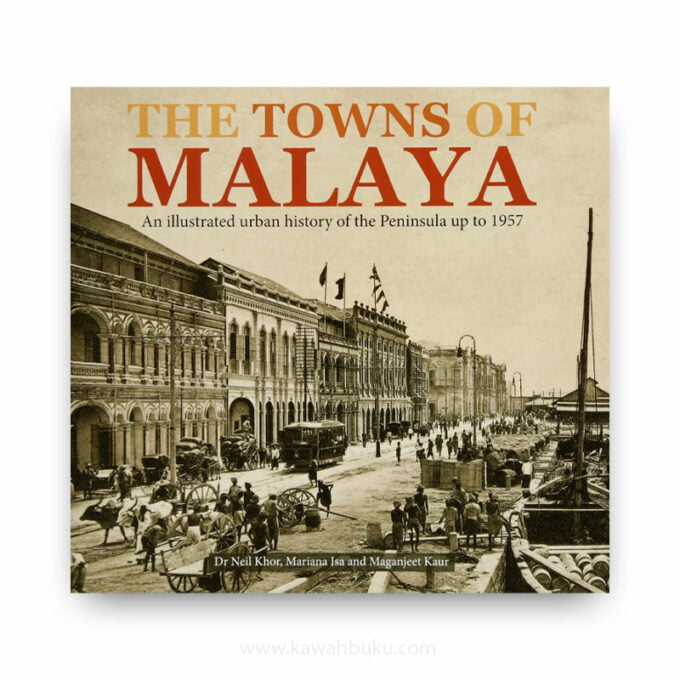 The Towns of Malaya: An Illustrated Urban History of the Peninsula up to 1957

The Towns of Malaya: An Illustrated Urban History of the Peninsula up to 1957 provides an overview of Malaya progress and development, as seen from the perspective of its towns and with a focus on the period beginning in the later part of the 19th century and ending with Independence in 1957. The starting point for this time period was selected based on the fact that the covered towns were only photographed starting from the late 19th century. Although photography was introduced in the 1850s, it was not widely practised for some decades, until the development of less cumbersome photographic equipment and improvements in photographic chemistry made photography a less onerous and more widespread undertaking.

The period covered coincides with the time when most Malayan towns developed under the ‘trusteeship’ of the United Kingdom. The British had established George Town, in Penang in 1786, assumed control of Malacca from 1789 to 1818 and again from 1824, and founded Singapore in 1819. From 1874 they gradually extended their control over the states of the peninsula via the residential system, beginning with Perak and Selangor that year. Though Kedah, Kelantan, Perlis and Trengganu were under the suzerainty of the Kingdom of Siam until the Anglo-Siamese Treaty was signed in 1909 Siam mostly left town-development affairs to the states themselves.

For many decades, British Malaya was administratively fragmented. Even as late as 1941, Malaya was composed of three coastal crown colonies the Straits Settlements, made up of Malacca, Penang and Singapore), a federation of four Malay states (the Federated Malay States or FMS, made up of Negeri Sembilan, Pahang, Perak and Selangor) and five protected Malay sultanates (Unfederated Malay States or UMS, made up of Johore, Kedah, Kelantan, Perlis and Trengganu). Administrative union was effected only after the major soczi upheavals of World War II, and even then, amid protests from many quarters.

The towns selected for coverage in the book number 35 in total and represent three main categories: royal, port and mining; with a final category of other towns comprising administrative towns, hill stations and railway or garrison towns. The book employs the names of the towns that were in use during the period under discussion. Several towns’ names were changed after Independence. In some cases, it was a minor spelling change (e.g. Kuala Trengganu to Kuala Terengganu); in other cases, the towns received entirely ncw names (e.g. Port Swettenham became Port Klang).

Chapter two delves into the establishment of British ports in the Straits Settlements in George Town and Malacca (now Melaka), and their smaller feeder ports: Batu Pahat, Muar, Kuantan, Port Dickson, Port Swettenham (now Port Klang), Port Weld (now Kuala Sepetang) and Telok Anson (now Teluk Intan). It was in George Town that the British concept of a township was first introduced in Malaya. The Sanitary Board and the municipal government that were developed there became the model for the other states. Singapore, the largest British port town in the Straits of Malacca is not included in this book as the focus area is on towns within present-day Peninsular Malaysia.

Chapter three focuses on towns that developed due to the mining of three main resources: gold, iron and tin. The building of these towns was commercially driven and accomplished with the aid of immigrant labour. Gold-mining activities were predominantly carried out within the Pahang Gold Belt with Raub, Penjom and Selinsing having the largest mines. Iron mining was focused at Bukit Besi and Kemaman in Trengganu, as well as at Batu Pahat in Johore. The gold-mining town selected is Raub, while Bukit Besi is taken as the representative iron-mining town. Both towns were the largest in terms of output for the respective ores mined. The tin-mining towns featured are Batu Gajah, Gopeng, Ipoh, Kampar, Kuala Lumpur and Taiping. With the exception of Kuala Lumpur, the selected towns were Peraks most prominent mining centres and also served administrative functions.

Chapter four features towns that do not neatly fall under the three main calegones. Butterworth, Kangar, Kuala Lipis and Tapah were prominent British administrative centres. Frasers Hill and Tanah Rata were the largest hill stations, while Kluang and Sungei Patani (now Sungai Petani) were railway towns that later expanded to become garrison towns. The British introduced planning standards and guidelines that produced the physical characteristics shared by all Malayan towns.

Material standardisation, such as brick party walls and concrete footings meant to control the spread of fire, transformed the towns’ earlier traditional forms, made up of attap huts. Towns were laid out on a grid plan with metalled roads and drainage specified to be of a certain width and size. Shophouse owners were required to surrender a one-and-a-half-metre strip of their ground frontage (the ‘five-loot way’) as shared public walkways. A central held (called a padang) bordered by government buildings, a clubhouse, a church and a commercial area, was a common feature of the towns.

By 1900, many Malayan towns began to develop social amenities beyond the immediate needs of industry. This reflected similar urban developments in Western Europe during the Industrial Revolution. Town halls began to finance bands and a sense of civic pride was felt. Important social occasions, often related to the British Empire, were celebrated with much ceremony and pomp. Schools were established to educate the young, solid houses were built, recreational parks were created and, eventually, entertainment outlets opened for ordinary working people.

Eventually, the towns that were most exposed to Western influence introduced their once-rural populations to a vast array of imported goods, processed foods and a dizzying variety of entertainment. The rapid development of Malayan towns also saw the establishment of a pluralist presence within many of the more traditionally orientated Malay-Muslim communities. These influences impinged on the Malay way of life, often giving rise to tensions and dissatisfaction. Yet Western education, usually centred in the larger towns, became a much sought-after commodity. When the Malay College was established in 1905 at Kuala Kangsar, the royal capital of Perak, it became the mainstay of Malay aristocratic education. As the 1930s came to an end, Malaya’s plural society began to be shaken by nationalistic struggle. Malays, Chinese and Indians were becoming resentful of their secondary position in Malaya, relative to that of the Europeans. European business and legislative power strangled opportunities for locals in the Malayan economy. By the end of that decade, the celebratory arches raised to celebrate events linked to imperial rule had lost much of their lustre.

The final chapter of this book tells the tale of war and independence. The Japanese invasion of 1941 began at Sabak Beach near Kota Bharu, Kelantan, and was dramatic and fast. Malaya’s defences were in the hands of British, Australian and Indian Army troops as well as Malay volunteers. While there was spirited fighting at Kampar and Slim River in Perak, the defending troops were soon outclassed and defeated. The subsequent three-and-a-half years of Japanese rule stripped away the image of British invincibility, which had been built up for nearly 150 years. However, the terror of mass execution and of summary justice exerted by the Japanese administration soon disillusioned even the hard-core nationalists, some of whom had expected Japanese support to further their cause.

The idea of a Malayan nation made up of the Straits Settlements, Federated Malay States and Unfederated Malay States either under a British administration or with ‘British Advisers’ was a postwar construction. The new nation was to be a multiracial, multi-religious and, as the Commonwealth Constitutional Commission (commonly known as the Reid Commission) proposed in 1957, secular state. Today, the process of building a national identity continues in the peninsulas towns and cities. Many of these towns have grown beyond recognition. Others have declined or stagnated, resembling ghost towns as the nation’s economy moved away from primary industries and into manufacturing. However, in the 21st century, as Malaysia moves towards a service-oriented economy, heritage and culture are both the echo and the imprint of the past, and essential to establishing present-day Malaysian identity.