Kawah Buku > History > Malaysia > The Way That Lives in the Heart: Chinese Popular Religion and Spirit Mediums in Penang, Malaysia
Out of stock 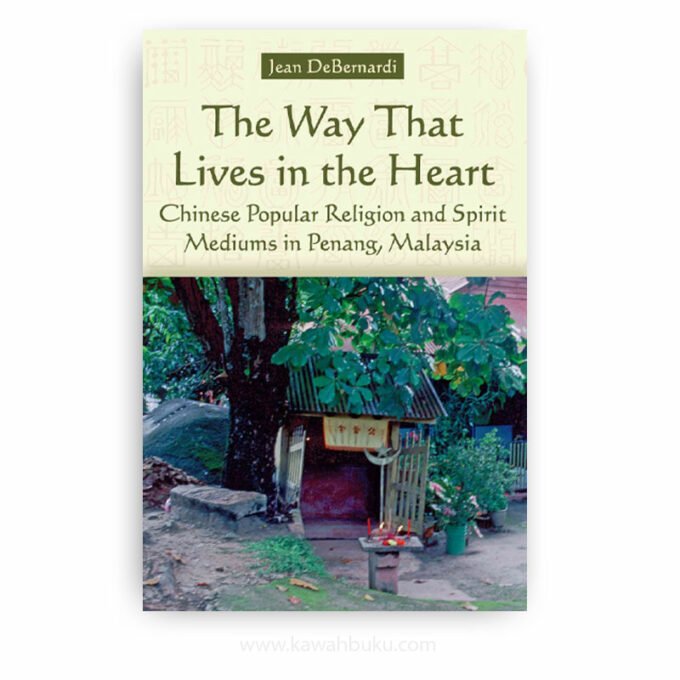 The Way That Lives in the Heart: Chinese Popular Religion and Spirit Mediums in Penang, Malaysia

JEAN DEBERNARDI is a professor of anthropology at the University of Alberta who has done extensive ethnographic and archival research focusing on Singapore, Penang, and two UNESCO World Heritage sites in China, Wudang Mountain, a popular pilgrimage site for Southeast Asian Daoists, and Wuyi Mountain, a famous tea-growing area in Northern Fujian.

The Way That Lives in the Heart: Chinese Popular Religion and Spirit Mediums in Penang, Malaysia focuses in more depth on the complex of beliefs and practices surrounding Malaysian–Chinese spirit-mediumship. The essence of mediumship is of course the trance itself, which allows gods and humans to interact at a very intimate level. Trance is also a type of performance, ‘a vehicle for the transmission and construction of tradition, historical myth, social memory, and the embodiment of a traditional habitus in movement, gesture, and expression’. Although the religious culture on which Penang spirit mediumship is founded is pan-Asian and ancient, and thus hardly unique to the Chinese, it also links Penang Chinese to their immigrant roots, employing a very specific set of Southern Min practices evocative of a literary tradition, best evinced by the tendency of practitioners to employ formal literary forms, spoken with ‘deep’ Min dialect pronunciation.

the content of the book consists of two main parts: a discussion of the habitus of Chinese religion in Penang, and four case studies of individual spirit mediums. The first part extends beyond the specific discussion of spirit mediumship, to include the theodical, moral and poetic foundation upon which regimes of practices are built. The first of three chapters in this section examines the concept of the ‘good life,’ specifically good luck, how one attains it, and how this is expressed materially. Here the inspiration comes from classic texts such as the Taishang ganying bian, which painstakingly outlines the karmic rewards and punishments for various types of moral and immoral behaviour, and is frequently echoed by mediums in trance. The second chapter explores the rules that govern the interaction between humans and gods, particularly as they are expressed in practice. The third visits many of the same themes, from the viewpoint of the gods who possess the mediums. While in medium, the gods reveal distinct personalities, as well as characteristic patterns of speech, dress and action, that are well known to, indeed anticipated by, viewers.

The second section closely examines four spirit mediums, revealing the degree of diversity and individuality contained within this broad tradition. While the idea of a prehistorical shamanistic ‘substrate’ of Chinese religion has of late provoked a strong response from within the field, DeBernardi argues persuasively that such a preexisting common tradition is precisely what allows the practice of spirit mediumship to adapt to different communities, Malay as well as Chinese. This is seen in the first chapter of the section, which explores the teachings of Datuk Aunt, a medium who is possessed by a variety of local spirits known as Datuk Gong. Students of Chinese religion will recognise these as very similar to the Chinese Tutelary Dieties (tudi shen), with the exception that they are Malay, and thus Muslim; Datuk Gong shrines are often painted the bright yellow of keramat and the spirits are only given halal offerings.

Reflecting this syncretism, the Datuk Aunt relates stories culled from a variety of sources, favouring especially the ghost stories seen in pulp literature. The following two chapters present a more familiar form of syncretism, that of the Chinese ‘three religions’ (san jiao): Daoism, Confucianism and Buddhism. Mediums of this tradition emphasise methods of Daoist cultivation and Confucian filial piety, respectively. The two presented draw heavily on a mix of classical literature, divinatory techniques and moral tales, the type that would be well known to listeners. The final chapter examines a medium that was frequently possessed by deities of mischievous or questionable character, particularly the Living Buddha Jigong. Like the ‘antilanguage’ of underground societies, the messages of this medium are often encoded with a double meaning, one that inverts traditional morality.

Preface
A Note on Romanization

Part One: Heaven on Earth
1. Mending Luck
2. Spiritual Collisions
3. Possessed by the Past

Part Two: Spirit Mediums
4. Domesticating the Dead
5. Self-Cultivation and the Dao
6. The Teachings of a Modern Master
7. Drawing on the Dark Side