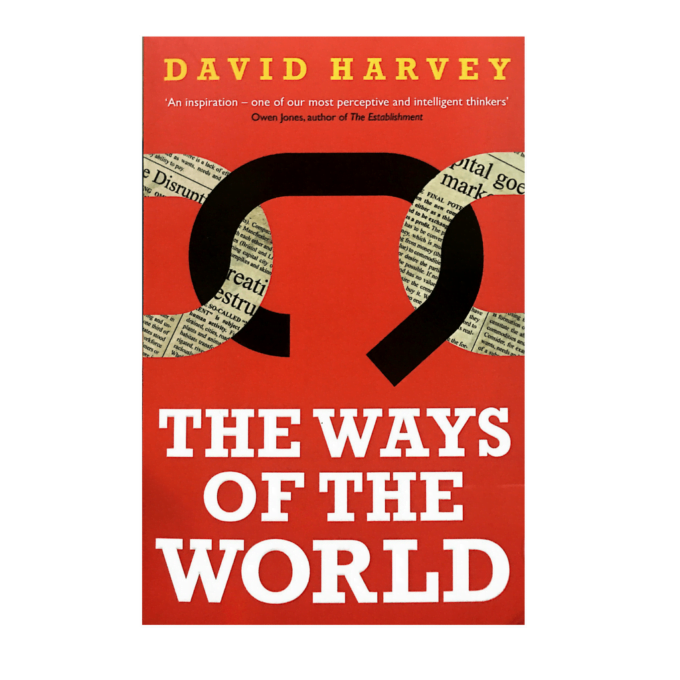 The Ways of the World

David Harvey is one of most famous Marxist intellectuals in the past half century, as well as one of the world’s most cited social scientists. Beginning in the early 1970s with his trenchant and still-relevant book Social Justice and the City and through this day, Harvey has written numerous books and dozens of influential essays and articles on topics across issues in politics, culture, economics, and social justice. A career-defining volume, The Ways of the World will stand as a comprehensive work that presents the trajectory of Harvey’s lifelong project in full.

The Ways of The World presents a sequence of landmark works in David Harvey’s intellectual journey over five decades. It shows how experiencing the riots, despair and injustice of 1970s Baltimore led him to seek an explanation of capitalist inequalities via Marx and to a sustained intellectual engagement that has made him the world’s leading exponent of Marx’s work.

Following a short introduction showing the pertinence of its approach and themes for understanding current developments in China.The book takes the reader through the development of his unique synthesis of Marxist method and geographical understanding that has allowed him to develop a series of powerful insights into the ways of the world, from the new mechanics of imperialism, crises in financial markets and the effectiveness of car strikers in Oxford, to the links between nature and change, why Sacré Coeur was built in Paris, and the meaning of the postmodern condition.

In The Ways of the World, Harvey has gathered his most important essays from the past four decades. They form a career-spanning collection that tracks not only the development of Harvey over time as an intellectual, but also a dialectical vision that gradually expanded its reach from the slums of Baltimore to global environmental degradation to the American imperium. While Harvey’s coverage is wide-ranging, all of the pieces tackle the core concerns that have always animated his work: capitalism past and present, social change, freedom, class, imperialism, the city, nature, social justice, postmodernity, globalization, and the crises that inhere in capitalism.

David Harvey is renowned for originality, acumen and the transformative value of his insights. This book shows why.

“David Harvey provoked a revolution in his field and has inspired a generation of radical intellectuals.” – Naomi Klein

“A consistent and intelligent voice on the left.” – Financial Times

“An inspiration – one of our most perceptive and intelligent thinkers.” – Owen Jones, author of The Establisment