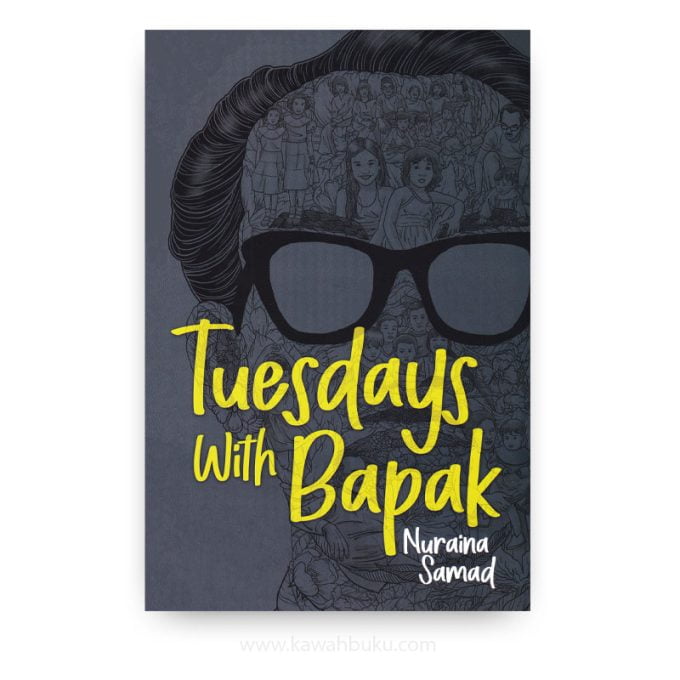 NURAINA SAMAD is a journalist with several news outlets in Malaysia, such New Straits Times, and The Mole. She is the daughter of the late A. Samad Ismail.

Tuesdays with Bapak is a biography cum a tribute from the daughter to his late father, A. Samad Ismail—a great Malaysian journalist, political activist, and creative writer, known for promoting Malay nationalism. A. Samad Ismail, who often went by the moniker Pak Samad, strongly believed that politics and journalism ultimately had a shared purpose—to serve the people and the nation. He never compromised on this principle—no, not even after he had to pay a heavy personal price. In his 70-odd years in active journalism, Pak Samad (as he was fondly known) worked as an Editor or contributed articles to a wide variety of newspapers including Berita Malai, Straits Times, New Straits Times, Malay Mail, Utusan Melayu, Berita Harian, and The Star—as no other newsman has done, past or present.

He hung tenaciously to his principles, despite being incarcerated thrice—twice in Singapore and once in Malaysia. Ironically, he served a term for serving the interest of the people before independence, and for not serving the interest of some politicians after independence. Despite his ordeals, he never became a broken or bitter man. In fact, he forgave his jailors who confined him to a secret bungalow in Petaling Jaya for five long years (1976-1981). Indeed, he even captivated them with his culinary skills, cooking for them his array of Malay cuisine and Chinese noodles.

In The New Straits Times, Pak Samad was well-known for his unconventional, non-conformist ways of thought and action. He would spot talent anywhere and then recruit them. He had given opportunities for reformed criminals, failed politicians, retired teachers or anybody else with proven abilities to work in the strenuous newspaper environment. Indeed, he was largely responsible for having discovered and given a break to a crime reporter who later became the well-known and well-loved cartoonist, Datuk Lat. He asked for no quarter in return. It’s true that much of this information about Pak Samad is already in the public domain.

But till now, little was known about him as a family man. How was he as a father? What was he like to his relatives? What were his pet projects, his private thoughts? How did the family hold together when he was detained for half a decade under the Internal Security Act (ISA)?

This is where his journalist daughter, Nuraina Samad, fills in the void with her fine turn of phrases and in her own inimitable and winsome way in this book Tuesdays with Bapak. She delights with her palpable and charitable ways. And sometimes with brutal honesty. She recounts many insightful episodes of how members of the extended family in Malaysia and across the causeway coped during the imprisonment. Of how once, her many cousins and aunts surreptitiously lined the street near the Jalan Bandar Police station just to get a glimpse of their beloved brother and uncle whizz past in an unmarked police car. And how they shrieked with joy when he waved to them. This is the yet largely-untold story of the family man, the compassionate father, the doting granddad, who would guffaw to calm nerves and diffuse a tense moment, and who had a great sense of humour. This is indeed a compelling read…

Bapak under ISA
2. Morning was Broken
3. The Other Side of Morning
4. Anak Komunis
5. The Third Time
6. When Encik Majid and Other Things Had to Go
7. The Wait, the Letter and Jalan Bandar Police Station
8. The First Tuesday
9. Comel
10. A Tuesday Tail
11. The Red Sedan
12. Azah’s Story
13. Of Neef Steak and Bamiah
14. Remembering Ramadan and Syawal of 1976
15. Bapak’s Homecoming
16. Justice for Bapak

Bapak and Journalism
17. When Bapak Returned
18. Remembering Kampung Melayu
19. All That and the Empire of Japan
20. Journalism and Merdeka
21. Tokoh Bapak
22. Old Friends
23. In Position “Country”
24. Saudara Anwar