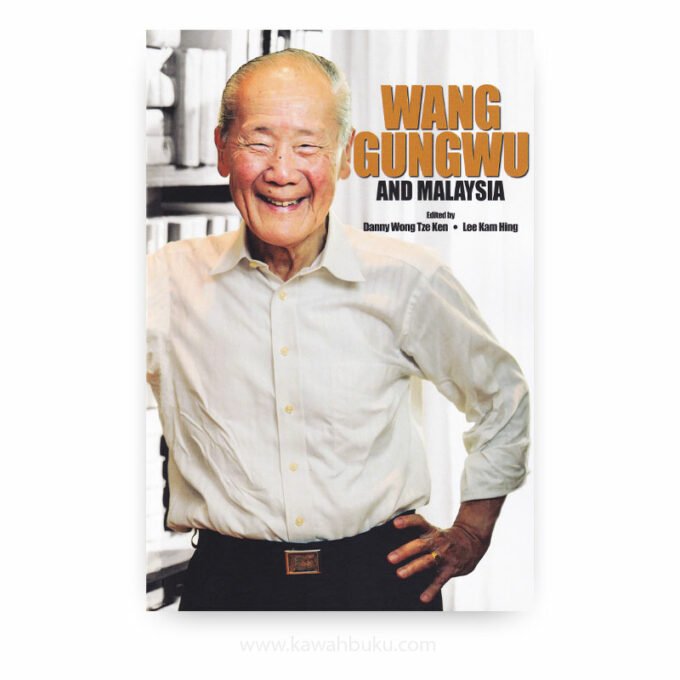 Wang Gungwu and Malaysia commemorate the happy occasion of Wang’s 90th birthday, a volume dedicated to a historian who has influenced so many all over the world. His writings help make sense of Malaysia the country he grew up in, of the Chinese communities overseas of which he was part of, and of a rising China from where his parents came. Wang Gungwu was born in Surabaya in 1930. His father had gone there from China to head a private Chinese school. Shortly afterwards the family moved to Ipoh where Wang grew up and attended school. Although growing up in the largely Chinese town of Ipoh, Wang still felt as an outsider because the people around him spoke dialects different from the one used at home. In 1942 his schooling was interrupted by the Japanese Occupation.

After the war, he went to China to study at the Central China University in Nanjing. But just a year later he had to leave China as the Kuomintang-communist civil war intensified. He returned to Malaya in time to join in 1949 the newly established University of Malaya in Singapore. That was the start of a long association with the University of Malaya, first in Singapore and later at the Kuala Lumpur campus. Wang graduated in 1952 majoring in History. He went on to complete his Master of Arts degree and then left for London. On his return in 1957 after obtaining his PhD, he joined the University of Malaya. Shortly afterwards, he and a number of other lecturers left Singapore to serve in the new branch campus in Kuala Lumpur.

The pioneering group of lecturers brought with them youthful energy and enthusiasm to a just established university in the newly independent Malaya. Wang, barely 30 years old, was asked to head the newly established Chinese Studies Department and was also elected Dean of the Arts Faculty. In 1962 he stepped down from the deanship as well as responsibility in the Chinese Studies Department to take over the headship of the History Department. The founding head John Bastin was leaving for SOAS. Over the next few years, Wang proceeded to build a department that soon became known for its strong teaching and research in Southeast Asia and particularly Malaysian history.

In the History Department Wang managed a transition from a largely expatriate staff to one made of more locals. Zainal Abidin Wahid, Khoo Kay Kim, Chandran Jeshurun, Krishen Jit and Jeyamalar Kathirithamby-Wells were the new local staff. Wang identified promising graduates to take up postgraduate studies to become eventual department members. In this transition, expatriate scholars were still recruited, such as William Roff and Anthony Reid. Roff, well known for his work on the origins of Malay nationalism, and Reid for his early Southeast Asian history, went on to professorial positions in Columbia University and the Australian National University respectively after they left UM. The high point of the History Department was the hosting of the IAHA Conference in 1968, and the large number of international scholars who attended was a testimony to Wang’s standing as a scholar in Asian history.

Wang’s academic leadership was already evident when he edited the Malaysia volume. The volume, with chapters written by several scholars all of whom were colleagues or friends, was to mark the formation of the new political federation of Malaysia. The book provided much information and insights into a new nation that was still unfamiliar to many, both within the country and overseas. Wang had followed closely the developments towards the creation of a new nation-state through the merger of independent Malaya with Singapore, Sabah and Sarawak where decolonisation was taking place. The book, Malaysia, remains an invaluable reference dealing with subjects ranging from prehistory and history, society and the economy, the flora and fauna, to contemporary developments.

Wang continued to encourage research and scholarly publications on Malaysian subjects. He became president of the Malaysian Branch of the Royal Asiatic Society and was editor of the society’s long-running journal. Contributing articles himself, he encouraged members of the university community to write for the journal. Equally important was the Oxford University Press series initiated by Wang which published theses produced by young scholars. Wang was editor of the series and under him, several works were produced, such as that of Rollins Bonney, Khoo Kay Kim and Michael Stenson that expanded knowledge of Malaysian history.

Under Wang, the History Department gave increasing attention to Malaysian history while ensuring that students were offered a selection of courses that was balanced in regional coverage. It was in the graduation exercises and postgraduate theses that attention to more local history could be developed. He encouraged public discussion among staff and students on new directions in Malaysian history. This discussion extended outside of the department to include school teachers. In 1963 Wang was appointed Professor of History. He was one of the youngest professors ever to be appointed in UM. The appointment also placed great responsibilities on him at a time when the branch campus became a separate independent institution to be known as the University of Malaya while the Singapore campus was renamed the University of Singapore. Wang was busy on the new university’s many committees as well as in Senate and Council, drawing upon some of his student leadership experience in discussions to ensure that UM was on course to become a good university.

Despite noting the growing communalism around him, Wang was always hopeful of a multi-racial Malaysia to come. Hence, when Tan Chee Khoon came to see him about forming a multi-racial party, Wang was supportive. Tan was a senior to Wang in UM and had become an outspoken and respected leader of the opposition in parliament. Coming together with Tan, to form Parti Gerakan Rakyat Malaysia were several colleagues and friends of Wang including Syed Hussein Alatas. Wang helped draft the constitution of the new party but did not become a member. By then he was preparing to leave for Australia to join ANU.

Wang’s decision to take up the professorial appointment in Australia was, as he explained, to devote more time to his research and writing. In the view of many, however, he had already accomplished much in Malaysia as an academic administrator and scholar. The publication of his PhD thesis and his other writings set firmly his international reputation as a historian on China. His Nanhai Trade and A Short History of the Nanyang Chinese continued to be very influential and used as regular references. He had by then also written on Malaysia. He set many of his subjects against the long trajectory of history to show how the recalling of the past has been important in shaping change in his time. He proceeded to write about relations the Melakan rulers developed with Ming China based largely on Chinese sources. In the process, he demonstrated the value of the Chinese records in offering new data and perspectives to early Southeast Asian history. In his writings, he often drew upon analogy to illustrate his ideas such as when he likened Malaysian nationalism to “a nucleus of Malay nationalism enclosed by the ideal of Malay-Chinese-Indian partnership.”

Wang Gungwu had not really left Malaysia. A number of his most important writings produced when he was in Canberra and in Hong Kong were on Malaysia. He wrote about the Chinese in Malaysia, elite competition, and power centres in the changing political landscape of Malaysia. He was in regular touch with former students and colleagues, and his support was always sought, whether in the setting up of the new Universiti Tunku Abdul Rahman or advising various learned societies and institutions in the country. But without doubt, it is the University of Malaya that claims his abiding affection.

CHAPTER 1 Memories of Wang Gungwu and the History Department, University of Malaya, 1963 to 1968
Khasnor Johan

CHAPTER 2 A Journey with Gungwu and History
Lim Teck Ghee

CHAPTER 4 Gungwu and I in Three Countries
Anthony Reid