Kawah Buku > History > Malaysia > What I Saw in Malaya: Lectures 1934-1938 by Jeanne Cuisinier
Out of stock 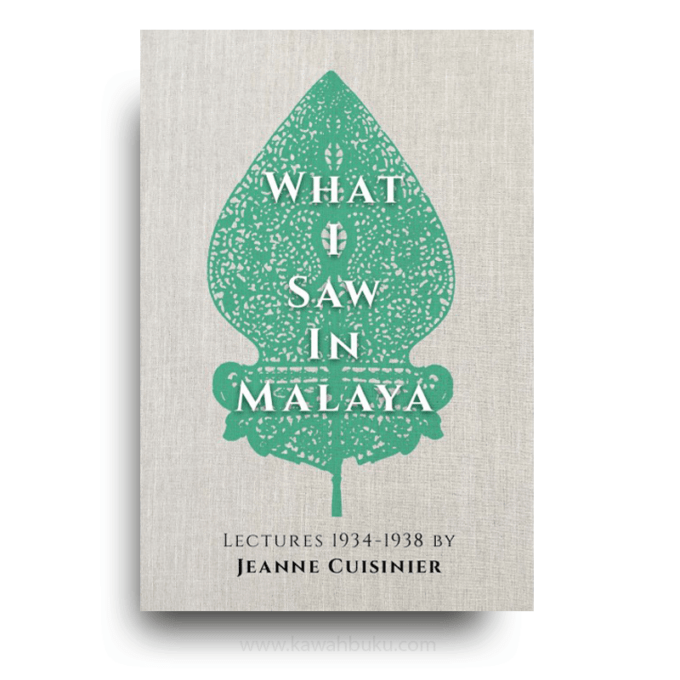 JEANNE CUISINIER (b. 1890 – d. 1964) is a French ethnologist. Her work focuses on the Malaysian state of Kelantan and the Mường of Vietnam.

What I Saw in Malaya is a lectures series by French ethnologist Jeanne Cuisinier when she explored Malaya, mostly Kelantan, in 1932 and 1933. In her lectures on Radio Paris — made public in this book for the first time since their broadcast in the 1930s — and in other texts assembled here, she shared her vivid and affectionate insights into the diverse cultures of Malaya, providing precious and thought-provoking perspectives to today’s readers.

In June 1935, Radio Paris, which then had the largest audience among French radio stations, started broadcasting a series of extraordinary lectures about Malaya. The speaker, Jeanne Cuisinier, was a one-of-a-kind ethnologist, an independent-minded scientist who spoke perfect Malay and had spent nearly two years of field research in the Peninsula, mostly in Kelantan.

The manuscripts of these unrecorded lectures reappeared by chance last year, and republish again in this book with the public for the first time in almost a century. These papers could well have been lost: they were first kept at the library of the Museum of Ethnography, then transferred to the Museum of Humankind, then transferred again later to the National Museum of Natural History, which gracefully granted us the right to publish them in English translation.

Stirred by this extraordinary discovery, the editor and team decided to launch a systematic search into Jeanne Cuisinier’s archives and indeed found more interesting material. In the second part of this book, readers will be allowed behind the scenes, with texts where Jeanne describes the trial and tribulations of a field ethnologist conducting research in Malaya in the 1930s. The third part will bring you to the Royal Asiatic Society in London, in 1934, where Jeanne gave a more scientific lecture (in English) on her work in Kelantan, disclosing her findings in all areas.

Jeanne Cuisinier (1890-1964), grew up in Brussels before moving to Paris. She was an accomplished musician and writer some of her poems have been made into beautiful songs. She travelled to Madagascar at the beginning of the 1920s and thereon to Indochina (1926-1927). Urged by the desire to learn more, she decided to follow courses at the Ethnology Institute and to learn Malay at the National Institute of Oriental Languages in Paris. In 1932, at age 42, the French Ministry of National Education assigned her to an ethnological and linguistic mission to Malaya. She stayed for 18 months in the State of Kelantan.

Later, Jeanne Cuisinier went on to study other societies in South-East Asia and to research themes such as the sacred dances in present Cambodia, Vietnam and Indonesia, or the early feminist movements of Indonesia hef interest in the status of women in society also transpires in her radio-lecture on the Malay marriage.

During her time in Kelantan, Jeanne travelled all over the State, meeting Sultans and Princes in palaces, as well as poor peasants in villages and indigenous people in the jungle. She wanted direct contact with everyone; she wanted to get her own impressions and her own experience by talking to people and living with people, She put into practice the new methods of ethnology, collecting a vast number of everyday life objects as well as numerous photographs and recordings. These more than 500 pieces are still kept today in the collections of the National Museum of Natural History and of the Quai Branly Jacques Chirac Museum in Paris.

She was also eager to share her findings with the French people, publishing a series of books, in particular, one about Malaya’s traditional performing arts, Danses Magiques de Kelantan [The Magic Dances of Kelantan] (1936) and another about Le Théâtre d’Ombres à Kelantan [The Shadow Theater of Kelantan] (1957). She gave lectures, such as the ones published in the present book, and she taught in universities (notably in Yogyakarta and Jakarta).