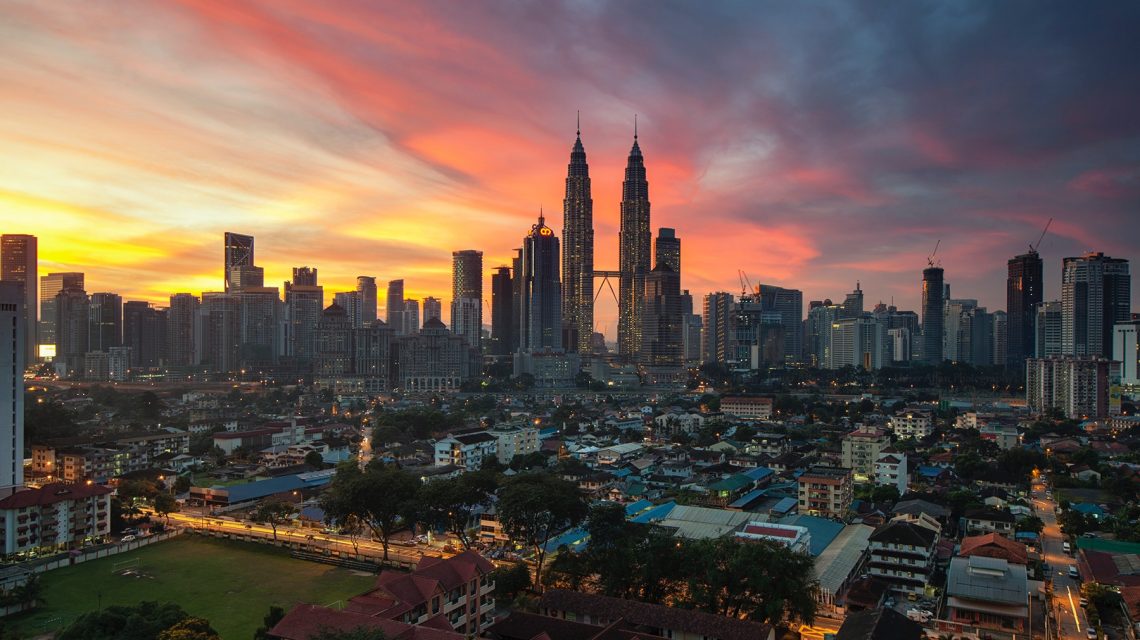 When Anwar Ibrahim agreed to write an article on Islam in Southeast Asia for Time magazine in September 1996, he chose to stress that tolerance is the “hallmark of Southeast Asian Islam”. He wrote that because “the seeds of militancy are everywhere” then “each community must ensure that they do not germinate and multiply through discontent and alienation”. Tolerance, he argued, cannot be demanded from only one community, but “must be mutual”.

The article was reprinted as one of the chapters in Anwar’s book The Asian Renaissance and frankly acknowledges the fragility of racial and religious coexistence.25 It is this fragility which seems also to be addressed in the aims of Vision 2020, where it is the fashioning of a Bangsa Malaysia which is stressed. This term ‘Bangsa Malaysia‘ is a critical one for understanding what the prime minister is trying to achieve. Most dictionaries of Malay translate the word ‘bangsa‘ as ‘race’ and it is in this sense that it is used to describe the Bangsa Melayu, the Malay race.

In the phrase Bangsa Malaysia, however, there seems to be a new element in the meaning of bangsa the adding of a sense of ‘nation’ to that of ‘race’. This fusion could achieve a positive reorientation in focus from a defensive, exclusive attention to the ethno-centric concerns of the individual races, to a more outward and inclusive concern with national unity. The creation of a ‘Bangsa Malaysia‘ a new race/nation calls for equal commitment and dedication from each of the races who have been resident in Malaysia since Independence or Federation.26

In the context of national racial unity, the aims of Vision 2020 are much more ambitious than the older aims of the 1970 Articles of Faith of the State (Rukunegara), which declared it was dedicated to “achieving a greater unity of all [Malaysia’s] peoples”. In Vision 2020 these ‘peoples’ are actually re-named. No longer Malays, Indians and Chinese, Vision 2020 creates a new race/nation will be “free, steadfast and with spirit; with self-confidence and respected by other races”.27 Vision 2020 shifts the focus from Rukunegara‘s harmony among the three races in Malaysia, to a new racial unity represented by the ‘Bangsa Malaysia’.

In the terms of Vision 2020, the Malays (bangsa Melayu) are no longer the pivotal race in Malaysia, the race from whose perspective ‘others’ are characterised. In the terms of Vision 2020 the Chinese and Indians are no longer the outsiders, the ‘other’ in Malaysia. Some Malaysian analysts view this new articulation of unity through the fusion of race/nation as the final step in overcoming the divisions inflicted on Malaya by the plural society fostered by British colonial practice.28

The rhetoric of Vision 2020 has yet to be proved in practice. It will require an enormous effort to replace the difference-driven discourse of Melayu with a new kind of rhetoric which constructs and sustains commonalities so that the concept of the Malaysian race/nation gains credibility and becomes a focus for national loyalty. Until now, most groups representative of Malay interests have been unable to “transform their concept of Malay nationalism (which was used to struggle for independence) into Malaysian nationalism”.29 Dr Mahathir has acknowledged this by admitting that the greatest political challenge facing the nation is the creation of a Bangsa Malaysia “in which the different ethnic groups should be able to share a common ‘national identity'”.30

This statement was made in 1991 when Malaysia’s economic growth was at an all time high (8.7 per cent) to be followed by three years of growth above 8 per cent.31 Perhaps to capitalise on a time of prosperity for the nation, the prime minister seized the opportunity to launch his Bangsa Malaysia vision. The social changes and new attitudes which the policy required of all Malaysia’s citizens called for real concessions of status from the Malays, concessions which were most easily given during a period of economic growth. The two leaders’ statements on the need for Malays to modernise and at the same time to use Islam as a source of moral values, could be interpreted as presenting Malays to the two other racial groups in Malaysia as closer to them in outlook and ethics.

A crucial part of such a transformation of image is the presentation of Islam as supportive of change. As one scholar of comparative religions has noted: “In the face of actual material and social transformation, an intransigent religion or ideological traditionalism” becomes less and less possible.32 Both the Prime Minister and the Deputy Prime Minister in their statements about Islam as a code for Malay behaviour, seemed to be working to establish a public form of religion, a civil religion if you like, whose system of beliefs can form the basis of a shared system for the nation. Closely linked with this representation of Islam as a moral code is the appeal to the nation’s legal code as another commonality which can unify all Malaysians. On 2 February 1997, the Sunday edition of the Malay newspaper Mingguan Malaysia carried a report about Dr Mahathir’s views on the causes of ‘social ills’ among the Malays. He is quoted as saying: “In Malaysia we can live harmoniously and peacefully not only amongst Muslims but also between Muslims and non-Muslims because we obey laws and regulations.”33

The statements by Dr Mahathir and Anwar Ibrahim which have been analysed here were delivered only a few months before the onset the economic crisis which began to affect the Southeast Asian region from mid-1997. The role of religion as an expression of identity in times of stress and disturbance is well known. It remains to be seen whether the foundation; which the leaders have laid for Islam to function as a civil religion and as one of the commonalities for a Bangsa Malaysia can survive the economic and social pressures which Malaysian society is currently experiencing Anwar’s challenge “to Muslims and the people of other confessions… to effectively articulate their moral vision and intensify the search for common ethical ground” may be overtaken by the enormity of the economic crisis.34 If that is the case, economic pressures may widen the racial divides in Malaysia as they did in Indonesia in the late 1990s. The challenge to Malaysian national leaders is to continue seeking and promoting the inter, racial commonalities which underpin Vision 2020.

We should not forget that it is the Federal Government which is setting the national agenda for the role of Islam in national unity, and that the power of the Federal Government does not extend to the conduct of Islamic affairs at the state level. Immediate challenges to this federal policy may come from the constituent states of the Federation, as well as from individual Muslim leaders who may resist the representation of Islam primarily as a code of ethical conduct. There may also be an ethno-nationalist reaction from many Malays to the attempt to reconfigure the nexus between Malay and Islam. If those Malays believe that the Malay sense of identity is threatened by a loosening of the linkage between Melayu and Islam, so that some Islamic values could be espoused by non-Malays, then it would be very difficult for Islam to be the basis for a civil religion and serve as a unifying element in the Bangsa Malaysia.

The question remains as to whether Dr Mahathir will be able to maintain the representation of Islam as reported in the 1996-97 statements. If the links between Malay and Islam cannot be reconfigured, and Islam is not accepted as the basis for a civil religion, the prime minister may have to turn to secular institutions as strategies for unity. Dr Mahathir has already indicated that recognition of the rule of civil law is an obligation which Unites all who live in Malaysia. On the eve of the twenty-first century, however, faced with the severe internal and external pressures on the national cohesion caused by the international monetary crisis, the Government’s aim of a united Bangsa Malaysia becomes especially critical. Without the rhetoric of a shared revolutionary struggle, which Indonesia’s leaders draw on, Malaysian leaders have fewer strategies for national unity.

Attempts to unite the peoples of the region now known as Malaysia are not new. In the lead up to Independence following the Second World War, several political movements tried to forge a united front for all local inhabitants of Malaya. But as one historian has put it, “Mainstream Malays were uneasy about the idea of nationality as it would give citizenship rights and equality to non-Malays. Bangsa Melayu was central to their well-being and Tanah Melayu was claimed as the exclusive property of the Malays”.35

The impediment to an inclusive bangsa was that “the Malays in Malaya never conceded to the non-Malays the right to adopt the Malay states as their homeland”.36 Although the Constitution establishes residence as the primary qualification for Malaysia citizenship, in popular understanding the concept of citizenship is not yet intertwined with the concept of Bangsa Malaysia. It would appear that if Dr Mahathir’s vision of a Bangsa Malaysia is to be realised the Malays will need to be convinced of at least two points. Firstly that Islam can function both as the religion of ‘the Malays’ as well as serving as a moral code and the basis of a civil religion; and secondly, that Chinese and Indians who settled in Malaysia before Independence (and in the case of East Malaysia before Federation) are entitled to regard Malaysia as their homeland.

If Malaysia’s leaders can persuade Malaysian citizens to link national identity with Islam as a civil religion and can persuade Malays to concede that non-Malay citizens have the right to call Malaysia their homeland, then the ‘new Malay’ as well as Indians and Chinese may indeed give their allegiance to a Bangsa Malaysia, and common grounds for real unity may be found. History nudges us here however, to remind us that almost inevitably there will reactions by Muslims and non-Muslims alike to any agenda-setting from the centre of power.

It is the process of interaction between these forces which will result in new configurations of Malay and Islam. As one observer of the fluidity of the notion of ‘Malayness’ has written, “A discursive formation does not necessarily run along the lines a center wants it to run. There is always the challenge, the resistance.”37

Virginia Hooker is Professor of Indonesian and Malay in the Faculty of Asian Studies, The Australian National University. She has recently published A Short History of Malaysia and a study of the personal experience of Islam in contemporary Indonesia.