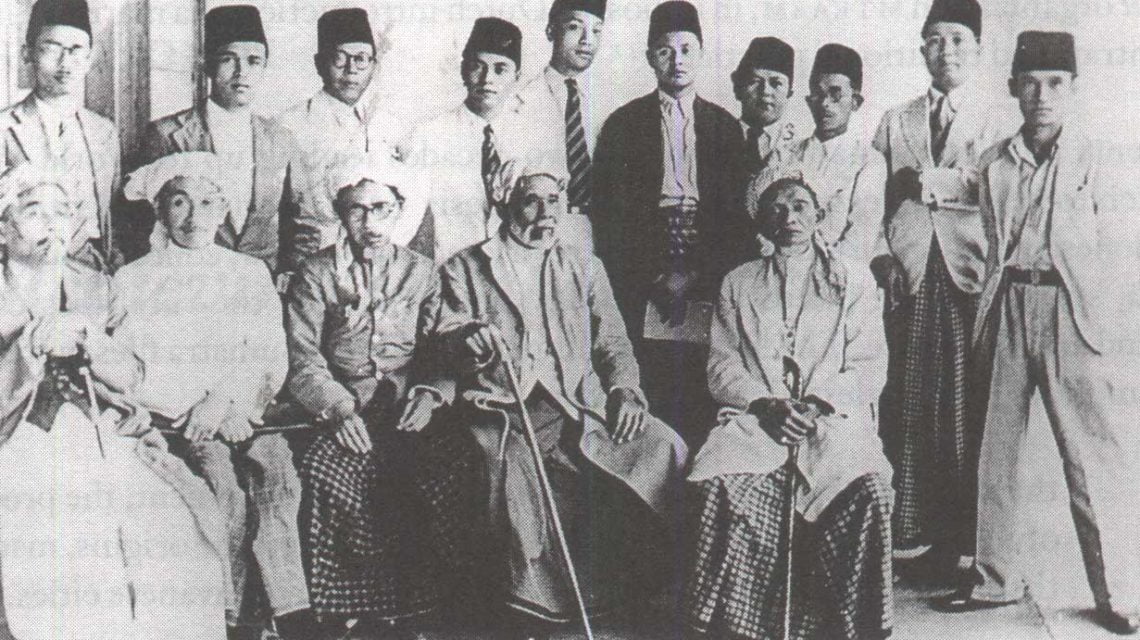 The Politicization of Kaum Muda 14 February 2019 – Posted in: Book Excerpts

In a volume of essays originally published in the Police Magazine and collected in 1935 under the title The Malayan Kaleidoscope, Haji Abdul Majid b. Zainuddin wrote that there was hardly a village in Malaya where the Malays did not argue and discuss the teachings of Kaum Muda: “The Kaum Tua or Old Party, from among whom have been recruited the religious officials of the country, try to insinuate in revenge that the Kaum Muda are undesirable Communists, which they decidedly are not.”105

The politicization of the image of Kaum Muda began to make itself evident only in the mid-1920s, notwithstanding the political implications inherent in reformist ideas prior to this time. Other writers have referred to the role played by Islamic reform in Indonesia as a kind of pre-nationalism.106

The same may be said of reformism in Malaya, but with the important qualification that, unlike the Indonesian movement, it never succeeded in elaborating, either organizationally or programmatically, a political nationalism capable of attracting mass support. That in other circumstances it might have done so, that there was a political edge to the knife, is clear from an examination of the writings of the polemical wing of the reformist movement in the 1920s. These are to be found primarily in two periodicals published, it may be noted, outside Malaya, by Malay and Indonesian students at the University of Al-Azhar in Cairo: Seruan Azhar (Voice of Azhar), 1925-28, and Pilehan Timour (Choice of the East), 1927-28.

Malay students had been sent for study to both Mecca and Cairo for some years, but it was only after the First World War, and particularly in the early 1920s with the rise in incomes resulting from the boom in rubber prices, that they traveled to the Middle East in any numbers. The cost of keeping a student in Cairo at this time was estimated at about $500 annually, often more, plus traveling expenses of some $300,107 so that only well-to-do or well-connected families could afford an education of this kind for their sons.

The peak years, corresponding to the most intensive pilgrimage years from Malaya, were probably 1924-27. In 1925, 27 Malay students arrived in Cairo, bringing the total number there to about 80, with some 200 or so from Indonesia.108

Three years earlier in 1922, the first association of Indonesian and Malay students had been formed at Al-Azhar, Al-Jami’ah Al-Khairiah (The Welfare Society),109 with an Indonesian as president. In October 1925, with the financial backing of a wealthy Malay student, Haji Othman b. Abdullah, the Society started the monthly journal Seruan Azhar “to bring radiance and light to our homeland.”110 Two years later a second monthly, Pilehan Timour, was started,111 and both continued publication until lack of funds forced their closure in 1928. The two journals were banned by the Dutch in Indonesia but found free entry into the Straits Settlements throughout their lives.

As with earlier newspapers and journals, Seruan Azhar and Pilehan Timour were much concerned with those topics of a primarily religious kind already dealt with at some length. What now made its appearance for the first time in Malaya was a new and aggressive spirit of overt political discussion. This centered around three main concepts: Pan-Islamism, Pan-Malayanism (union between Indonesia and Malaya), and anti-colonial nationalism.

The first of these was the least realistic in political terms and the shortest-lived, hinging as it did on the hopes aroused by the conquest of the Hejaz by the Wahhabi ruler Ibn Saud in 1924 and the ill-fated attempts to resurrect the Caliphate and organize a rejuvenated Islamic world, which finally came to grief with the failure of the proposed Islamic World Congress at Mecca in 1926. A representative was sent to Mecca by a committee of the Welfare Society of Malaysian students, which called itself Al-Difa’ Al-Watani (The National Guard), and at least two delegates traveled from Malaya.112

International Islamic unity as a political ideal expressed in Pan-Islamism had little force or influence in Malaya in spite of an undoubted interest in the progress, welfare, and government of the Middle Eastern countries. But there was, nevertheless, among the reformist-oriented element, a certain amount of excitement at this time about the possibilities in the idea of a common Islamic renaissance that would command the respect of the West.

More important in the long run was the growth of the idea of a closer union between Malaya and Indonesia. Though not worked out in any detail, or indeed proceeding beyond sentiment and exhortation, some sort of political association between the two areas became a recurring theme in the columns of Seruan Azhar. The journal’s first editorial, written by Mahmoud el Jounousij, made an appeal for the peoples of Sumatra, Java, Borneo, and Malaya to “unite with one heart for progress and prosperity.”113

Much was made of the possession of a common religion and a common language, and numerous articles compared the present state of economic development, education, and political life under the separate colonial regimes.114 From this developed discussion of colonial rule as the major obstacle to true progress and reform, and it is in this area of discourse that the most outspoken political protests against the status quo occurred.

In an article entitled “What is the Advantage of Freedom?,” the Malay writer Abdullah Ahmad wrote concerning the educational systems of Malaya and Indonesia: “We do not deny that education is necessary for freedom, but we do not believe that education which is given in countries under colonial rule can contain the seeds of freedom. The knowledge that is given to peoples under foreign influence has no purpose other than to impoverish their intellects and teach them to lick the soles of their masters’ boots.”115

This is a far cry from the carefully apolitical reformism advocated by Al-Imam twenty years earlier, with its emphasis on the real or imagined sins of the Malays themselves. “It is not that we say that [the British] are indifferent to our welfare,” Sayyid Shaykh had written in 1906 discussing colonial rule, “just that they don’t do all that they should do, especially in the held of education.”116

Reformism was becoming more militant, but in doing so it was losing or shedding much of its explicitly religious basis. A new generation of nationalists was appearing. Though they might have obtained their introduction to nationalism in the wider world by way of the Islamic renaissance, they were to pursue their goals largely independently of any avowed religious framework of ideas. In a review of the year 1927 (which, it will be recalled, saw the suppression of the Communist revolt in Sumatra), Seruan Azhar said that the most striking change to come over the homeland during the past year was the transformation of the Kaum Muda-Kaum Tua dispute, concerned as it was with religious trivia, into a communist and noncommunist dispute.117

While this referred to Indonesia, the secularization of reformism was proceeding in Malaya also, though in a much less dramatic and clear-cut fashion.

The term ”Kaum Muda,” though it never wholly lost its connotation of challenge to traditional religious authority, came more and more to take on a purely secular meaning. A decade later in 1940, it was possible for the Sultan of Perak to speak of Malay society as divided into three distinct groups, Kaum Tua, Kaum Muda, and Orang Muda2: “Those who come under the first category devote their time mostly to the spiritual side of life, those under the second category to the material side of life, while the third may be said to waver between the two.”118

William R. Roff (b. 1929 – d. 2013), was professor of history, emeritus, at Columbia University. His first book, based on his dissertation, was The Origins of Malay Nationalism (1967), which remains a landmark contribution to the field. In his editorial preface, Roff’s mentor and predecessor in New Zealand, Harry J. Benda (1919-71), declared it to be a “pioneering work in Malay history” in which, rather than arguing for the merits of Asia-centric history, the author had simply “gone and written it-and written it well.”