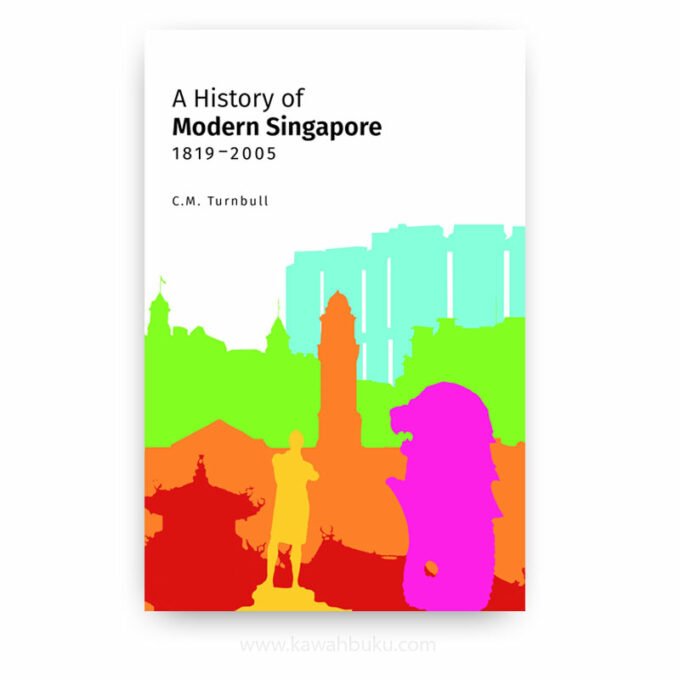 CONSTANCE MARY TURNBULL (b. 1927 – d. 2008) was a British historian lauded for her lifetime of literary research writing contributing to the documentation of Asian history and for her documentary work on The History of Singapore.

A History of Modern Singapore, 1819-2005 sets out the key elements of Singapore’s colonial experience, under the East India Company and the British Crown. It is a past that has come under more scrutiny since Singapore devoted considerable resources to mark the bicentennial of the founding of Singapore in 1819. C.M. Turnbull’s one-volume history of Singapore has been an essential resource since its first edition was published in 1977. Revised fully twice, in 1989 and 2006, it remains irreplaceable, even as new research has widened the vistas with which to understand the island city-state, over a longer time period and in broader contexts. In particular, this volume provides a solid foundation for understanding the 200-year trajectory from modern colonial outpost to world city.

The author traced the island’s story to 1975, the first decade of Singapore’s independence, made use of both primary and secondary sources, and can be considered the first scholarly synthesis of the island’s history. Since then, the young republic’s economic and social achievements had thrust the island yet again into the spotlight and merited a second edition, published in 1989, to take the story to the elections of 1988. This latest edition renamed A History of Modern Singapore, brings the story to 2005, the fortieth anniversary of Singapore’s independence. It includes an examination of the changes that occurred after a younger generation of leaders took over the reins of power from the Old Guard to fulfill, as their predecessors had done, the same mission of ensuring Singapore’s continued growth and stability in a vastly different world context.

Like its previous two editions, this revised volume approached the history of Singapore sequentially, with each of its 10 main chapters giving due weight to important turns in the island’s progress over time. Starting with the narrative of Singapore’s beginnings as a British settlement in 1819, the chapters survey its history in chronological fashion, with chapter breaks in the narrative marked by familiar political milestones such as its inclusion in the Straits Settlements in 1826, transfer to Colonial Office control in 1867, the relative calm of the interwar years contrasted with the upheaval of war with Japan in 1941 and subsequent Japanese occupation, followed in the aftermath of war by the onset of the struggle for ‘Merdeka’ from British rule, the creation of the new nation after its sudden separation and independence from Malaysia in 1965, and the taking over by the New Guard from 1990.

The bulk of the chapters retain the essential narrative of the earlier editions, augmented where appropriate by additional content gleaned from the findings of recent scholarship. Using such new content, Turnbull, for example, was able to provide a fuller discussion in Chapter 1 of the pre-colonial history of Singapore than was possible in her earlier surveys. This latest 2009 publication offers two new chapters — a 17-page ‘Introduction’ that provides an update of some of the recent developments in Singapore historiography, and Chapter 10, its last chapter, entitled ‘The New Guard, 1990–2005’, which surveys the changes under the premiership of Goh Chok Tong, Singapore’s second prime minister, who replaced Lee Kuan Yew in 1990, and that of Lee Hsien Loong, who took over the reins from Goh in 2004.

Chapter 9, titled ‘The Republic of Singapore, 1965–1988’ in the second edition, has also been expanded and renamed ‘The New Nation, 1965–1990’ to make up for the years between 1988 and 1990. The valuable bibliographical survey in the earlier editions has also been further augmented to provide an updated guide to the major archival sources and mainly English-language publications relating to Singapore for those interested in reading further.