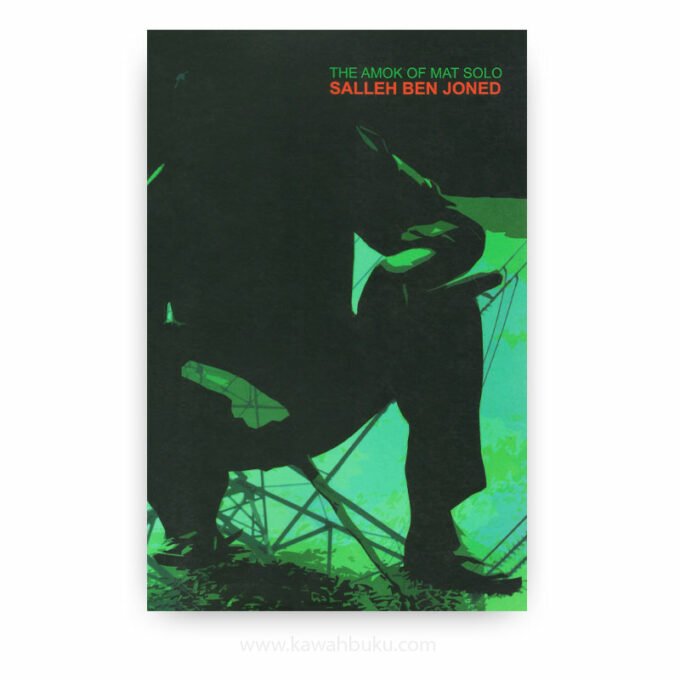 The Amok of Mat Solo

SALLEH BEN JONED (b. 1941 – d. 2021) was a renowned poet and satirist and is considered one of the Malaysian literary giants of his time.

The Amok of Mat Solo is Salleh ben Joned’s extension of “The Ballad of Mat Solo,” a poem first published in 1987 in a collection of poems entitled Poems Sacred and Profane, and later republished in 2002. The writer truly lives up to his character—he pushes the parameters of acceptability. Salleh had once said in one of his essays, As I Please, “if self-censorship is bad for the general intellectual development of a country, it’s worse for the development of its literature”.

Hence, Salleh abandons all social niceties; he scathingly portrays Malay kampong folks as people having very low mental capacity, Malay politicians and academics as pretentious, affected, conceited and hollow, and the worst kind of bumigeoise (Malay bourgeoisie), the women, as having “Pyrex mentality.” The language of the play is earthy with a generous amount of profanities to highlight the unstable mind of the protagonist, Dr Muhammad Awang bin Hitam, also known as the tragic Mat Solo. The Amok of Mat Solo is a dark play about a disenfranchised Malay academic who becomes increasingly alienated from his family members, his colleagues and his community. The closure is not a pretty sight; after killing his own wife and other people, Mat Solo is shot by the law enforcers.

The play is recreated from the poem “The Ballad of Mat Solo” where Salleh describes the tragedy of Mat Solo, a Malay man driven to his death because of mental depression. In this poem, we see a man trapped in modernity and a psychological limbo as he stands “on the dizzy height of a monstrous power pylon” flicking his burning Lucky cigarette into the air, and at tradition, as he thrusts his kris into an innocent bystander. Mat Solo perceives himself as a victim whose manhood has been affronted, and he reacts in the common tradition of Malays pushed to react in the frenzy of the liver—he runs amok. In the play, Salleh foregrounds various forces which push Mat Solo’s unstable mind to collapse completely. Mat Solo, the highly educated academic, has been dismissed from the university whose environment he finds stifling. He also loathes simple-minded kampung folks, although they respect him as a “Master Propeser” from “Ko Lumpo.”

By naming these simple rustic people “Mat Hempap,” “Mat Lebih,” “Mat Tahu” and “Mat Lekat,” Salleh returns to elements of the Morality plays, Medieval European verse drama in which the characters’ names personify their moral qualities. “Mat Hempap” and his group of friends seem to be easily duped by city dwellers. By making them speak in Manglish, “Mat lebih right, Propeser. You bery educated, but dat don mean you can play with holy words”, Salleh pokes fun at their artless existence.

Salleh’s appropriation of the name “Tuah” highlights the degradation of Malay heroes. Hang Tuah is synonymous with the loyalty of a Malay subject to his king. But Salleh’s educated Malay characters such as Datok Seri Muhammad Tuah and Prof Dr Takdir Al-Atas are perceived as bumigeoise men who have sold their souls for material wealth. Indeed, The Amok of Mat Solo highlights the artificiality of the Malay bumigeoise community which “lives the Pepsi way” and yet is caught by the need to be more disciplined, more progressive and more extreme in its religious beliefs

Cast
The Set
TV Panel Discussion
The Dance of the Dead