Kawah Buku > Southeast Asian Studies > The Killing Season: A History of the Indonesian Massacres, 1965-66
Out of stock 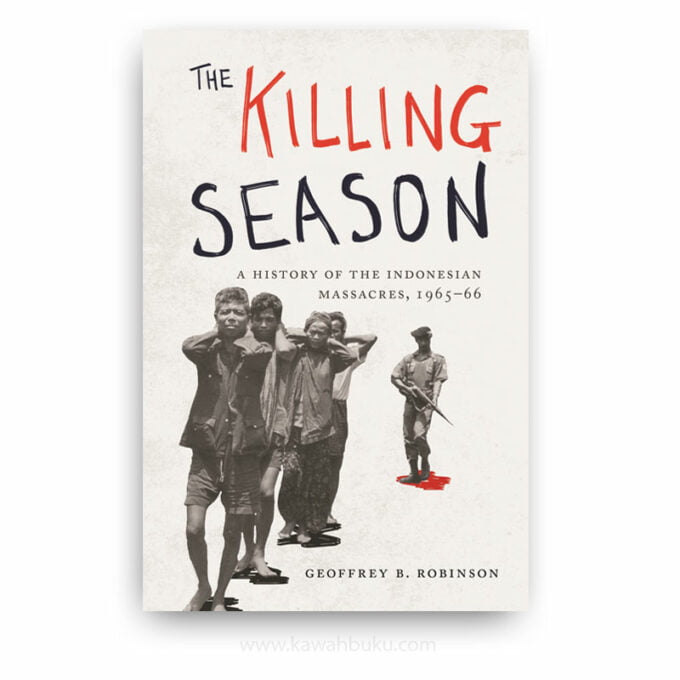 The Killing Season: A History of the Indonesian Massacres, 1965-66

GEOFFREY B. ROBINSON is professor of history at University of California, Los Angeles. He writes and teaches about the history of political violence, genocide, human rights, and mass incarceration, primarily in Southeast Asia. He is the author of several books and dozens of scholarly articles. His major works include: The Dark Side of Paradise: Political Violence in Bali (Cornell, 1995); East Timor 1999: Crimes against Humanity (Elsham & Hak, 2006); “If You Leave Us Here, We Will Die”: How Genocide Was Stopped in East Timor (Princeton, 2010); and most recently, The Killing Season: A History of the Indonesian Massacres, 1965-66 (Princeton, 2018).

If you purchase this book you will earn 16-24 reward points!

The Killing Season: A History of the Indonesian Massacres, 1965-66 explores one of the largest and swiftest, yet least examined, instances of mass killing and incarceration in the twentieth century—the shocking anti-leftist purge that gripped Indonesia in 1965–66, leaving some five hundred thousand people dead and more than a million others in detention. An expert in modern Indonesian history, genocide, and human rights, Geoffrey Robinson sets out to account for this violence and to end the troubling silence surrounding it. In doing so, he sheds new light on broad and enduring historical questions. How do we account for instances of systematic mass killing and detention? Why are some of these crimes remembered and punished, while others are forgotten? What are the social and political ramifications of such acts and such silence?

Challenging conventional narratives of the mass violence of 1965–66 as arising spontaneously from religious and social conflicts, Robinson argues convincingly that it was instead the product of a deliberate campaign, led by the Indonesian Army. He also details the critical role played by the United States, Britain, and other major powers in facilitating mass murder and incarceration. Robinson concludes by probing the disturbing long-term consequences of the violence for millions of survivors and Indonesian society as a whole. Based on a rich body of primary and secondary sources, The Killing Season is the definitive account of a pivotal period in Indonesian history. It also makes a powerful contribution to wider debates about the dynamics and legacies of mass killing, incarceration, and genocide.

In a little over six months, from late 1965 to mid-1966, an estimated half a million members of the Indonesian Communist Party (Partai Komunis Indonesia, or PKI) and its affiliated organizations were killed. Another million or so were detained without charge, some for more than thirty years, and many of them were subjected to torture and other inhumane treatment. Few, if any, of the victims were armed, and almost all those killed and detained belonged to what were at the time lawful political and social organizations. This was not a civil war. It was one of the largest and swiftest, yet least examined instances of mass killing and incarceration in the twentieth century.

The consequences of the violence were far-reaching. In less than a year, the largest non-governing Communist party in the world was crushed, and the country’s popular left-nationalist president, Sukarno, was swept aside. In their place, a virulently anti-communist army leadership seized power, signaling the start of more than three decades of military-backed authoritarian rule. The state that emerged from the carnage, known as the New Order, became notorious for its systematic violation of human rights, especially in areas outside the heartland, including East Timor (Timor Leste), Aceh, and West Papua, where hundreds of thousands of people died or were killed by government forces over the next few decades. The violence also altered the country’s political and social landscape in fundamental ways, leaving a legacy of hypermilitarism along with an extreme intolerance of dissent that stymied critical thought and opposition, especially on the Left. Perhaps most important, the events of 1965–66 destroyed the lives of many millions of people who were officially stigmatized because of their familial or other associations with those arbitrarily killed or detained. Even now, more than fifty years later—and some twenty years after the country began its transition to democracy—Indonesian society bears deep scars from those events.

In its sweep and speed, and its profound political and social implications, the violence of 1965–66 was comparable to some of the most notorious campaigns of mass killing and imprisonment of the postwar period, including those that occurred in Bosnia, Cambodia, and Rwanda, and it far surpassed other campaigns that have become iconic symbols of authoritarian violence in Latin America, such as those in Argentina and Chile.

“In terms of the numbers killed,” the Central Intelligence Agency (CIA) wrote in 1968, “the anti-PKI massacres in Indonesia rank as one of the worst mass murders of the 20th century, along with the Soviet purges of the 1930s, the Nazi mass murders of the Second World War, and the Maoist bloodbath of the early 1950s.” And while there is still no consensus on the matter, some scholars have described the Indonesian violence as genocide. Yet half a century later, this violence remains virtually unknown internationally. Thus, the World History Project website entry for the year 1965 includes the fact that “Kellogg’s Apple Jacks Cereal First Appears,” but fails to mention the killing of half a million people in Indonesia.

Even inside the country, the events of 1965–66 are still poorly understood, having only recently become the focus of serious discussion by historians, human rights activists, and the media. The massive production of testimony, memoir, truth telling, and forensic investigation—to say nothing of reconciliation, memorialization, and justice—that has followed virtually every genocide in the twentieth century has scarcely begun in Indonesia. Moreover, in contrast to most of the great mass killings of the past century, these crimes have never been punished or even properly investigated, and there have been no serious calls for any such action by international bodies or states. In this respect, Indonesia is arguably closer to the Soviet Union, China, and the United States than to any other country.

The Killing Season: A History of the Indonesian Massacres, 1965-66 aims to disturb the troubling silence. Its first aspiration is to clarify some basic historical questions: How many people were killed and detained? Who were the victims, and how did they die? Who were the perpetrators, and what motivated them? What happened to the hundreds of thousands who were detained and their families? These basic questions—testament to the significant gaps in our knowledge—need to be answered as a matter of urgency, especially as the number of reliable witnesses and participants declines with every passing year. The book also explores a number of deeper analytic puzzles elaborated below. Most important, it asks the following questions: How and why did this extraordinary violence happen? What have been the consequences of the violence for Indonesian society? And why has so little been said or done about it in the intervening years?

With a few exceptions, scholars have viewed the events of 1965–66 as distinctively Indonesian, explicable mainly in terms of Indonesian culture, society, and politics. The implication has been that the dynamics at play are somehow unique and not comparable to other cases. While there is certainly much that is distinctive about the Indonesian case, my sense is that it shares many features with other instances of mass killing and detention, and that a more broadly comparative approach would be productive, both for understanding Indonesia’s experience and enriching the general debate on such questions. And so while focusing substantively on Indonesia, this book also seeks to engage wider debates about the dynamic of mass killing and incarceration, about the long-term legacies of silence and inaction in the aftermath of violence, and about the history of human rights. To that end it asks: Under what conditions are mass killing and incarceration most likely to occur? Why are some such serious crimes remembered, condemned, and punished, while others are forgotten and left unpunished? What are the political, social, and moral ramifications of such acts and silence—for victims, for perpetrators, and for a society as a whole? My expectation is that a close examination of the mass violence of 1965–66 in Indonesia will provide insights into all these questions.

Preface
Note on Spelling and Translation
Abbreviations and Foreign Terms

CHAPTER 7 “A Gleam of Light in Asia”