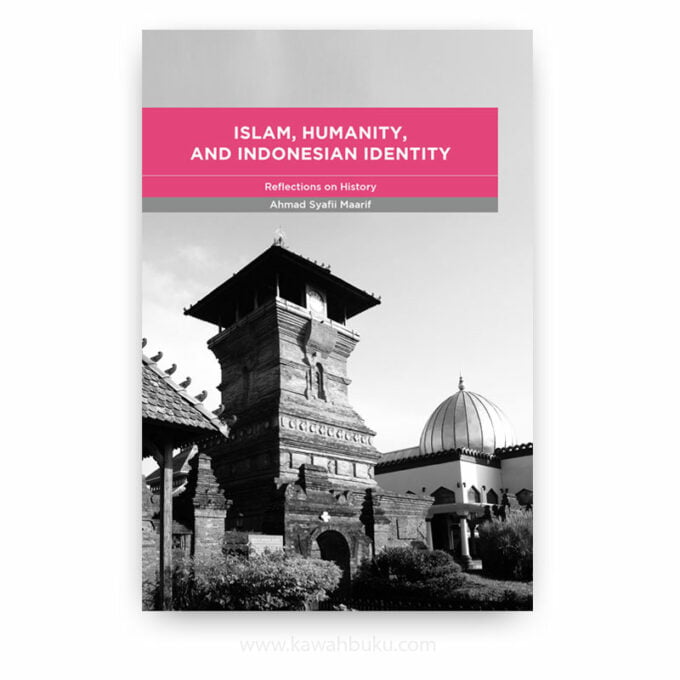 AHMAD SYAFII MAARIF is professor emeritus at Yogyakarta State University and founder of the MAARIF Institute for Culture and Humanity. He was the chairman of Muhammadiyah from 1998 to 2005.

Islam, Humanity, and Indonesian Identity: Reflections on History reveals the three pivotal themes that throughout Syafii Maarif’s life have played a central role in his thinking, writing, and actions: being Muslim, being Indonesian, and being human, and their interconnection. The subtitle stresses the importance of reflecting on history as an essential tool for understanding and tackling contemporary social and moral evils such as poverty, injustice, corruption. Syafii Maarif takes as a premise that the “real nature” of being Muslim, being Indonesian, and being human can only be appreciated through education. Therefore, he engages these topics—be it separately or jointly—in most of his post-1985 speeches, lectures, articles, and books. Here, they are collected in one volume.

Islam, Humanity, and Indonesian Identity: Reflections on History draws on a variety of sources, including historical ones, both Indonesian and foreign, primary and secondary. It is written in tribute to Indonesia, to Islam—the religion of the majority of Indonesians—and to humanism, which theoretically informs and protects Indonesian nationalism. The author’s mission in writing this book is linked to the future of Indonesia, at least as he sees it as one of its citizens who is now in his seventies. The author feels a kind of profound disquiet about Indonesia’s still unsuccessful realization of the promises of independence expressed by its leaders so many decades ago. Those promises had been made long before the Proclamation of Independence in 1945. It is this disquiet that pushed me to write my reflections on history, for the future of the nation.

In his travels to the numerous islands throughout Nusantara (the Indonesian archipelago), the unmatched beauty of the country left an indelible impression on the author. The author asked himself why it was that Indonesian history did not reflect its natural landscape. Instead, they have managed their nation. To create a framework for this book, the author needed to consult a wide variety of reading materials, texts that would lead him to the type of wisdom that could be acknowledged on all sides, Muslim and non-Muslim. The author’s aim was simple enough: that Indonesia remains whole and survives far into the future, that it not be destroyed at the hands of its own children who do not know themselves, who are greedy, blind, and obtuse. This nation must be defended honestly and responsibly. This is the concrete and true meaning of our post-independence nationalism.

This work is the author’s response to the conditions of modern Indonesia as well as to the map of the global Islamic umat, or community, which seems powerless to overcome the challenges that arise, one after another. A strong sense of cultural stagnation is still felt in all Muslim countries as if great achievements no longer belong to them. But no matter what the situation, the flag of optimism must always be flown, even in the midst of the sea of pessimism that has engulfed part of the Indonesian people and the global Islamic umat. Russell well describes the difference between stagnation and progress: “Periods of stagnation are periods during which people feel powerless. Periods of progress occur when people feel that great deeds are possible and thus want to own a share in them.”

Under these unhappy conditions, some Muslim writers have come forward in an effort to find the answer to these questions: Why has the Islamic world too long been at the tail end of civilization? Why does it find it so difficult to rise up?

Indonesia, with the benefit of its critical optimism, must truly rise again by giving birth to great works of high quality in the sphere of justice, and in well-being that is felt by all. Islam, if understood correctly and intelligently, will give an awesome impetus to the strengthening of Indonesian identity under the aegis of “belief in God, the One and the Only” and “a humanity that is just and civilized,” as one manifestation of our faith and our common existence as a nation. Islam, Indonesianness, and humanism must be woven together so elegantly and beautifully that the widespread subcultures that constitute Indonesia as a nation and a state feel the safety and tranquility they need to survive in this “continent of islands” for all time.