Kawah Buku > History > Southeast Asia > Organising under the Revolution: Unions and the State in Java, 1945-48 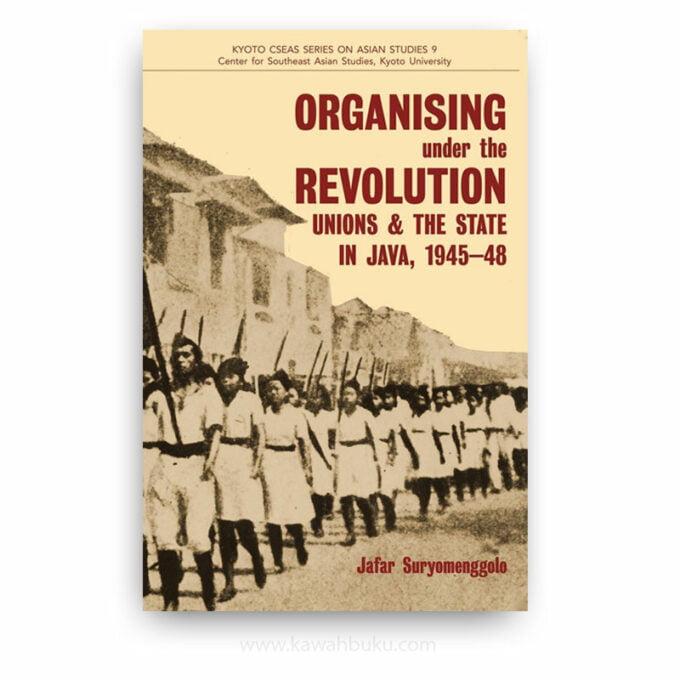 Organising under the Revolution: Unions and the State in Java, 1945-48

Organising under the Revolution: Unions and the State in Java, 1945-48 challenges the prevailing assumptions that see labour movements as political arms of the post-colonial state. The author’s conclusions provide a comparative lens for the study of labour movements in Southeast Asia and developing countries in general. The years 1945-48 marked the peak of the Indonesian revolution, but they were also formative years for the state-labour relationship in modern Indonesia. Drawing on a wide range of historical sources, Jafar Suryomenggolo reconstructs labour’s initial drive to form and orient unions during this critical period. The historical narrative captures early unions’ nationalist spirit and efforts to defend members’ socio-economic interests and shows the steps taken by the labour movement to maintain its independence and build institutional capacity within the new Indonesian state.

The book focuses on railway workers and the major railway workers’ union, the Sarekat Buruh Kereta Api. It is based on the publications of the SBKA, official Indonesian archives, archives from the Netherlands and contemporary newspapers. Jafar argues that the three years 1945–1948 was a unique period in the history of the Indonesian labour movement which should be studied separately from what came before and after. This is a tightly focused in-depth study of one of the more active and important labour unions during the revolutionary years. There is also a detailed analysis of the 1948 labour laws, the first labour legislation in the newly independent state, based on hitherto unused Indonesian government archives.

The author is critical of literature that sees the labour unions between 1945 and 1950 as subordinate to the state’s nationalist project. Instead, he argues for the independence of labour unions, by focussing on the spontaneous actions of railways workers in the chaotic first few months after the declaration of independence. He details the way in which railway workers quickly took control of stations and workshops, their strong opposition to the Dutch and their efforts to create worker-managed workplaces. He argues that worker control of individual workplaces challenged the authority of the state, which quickly moved to bring them under control. By early1946 the newly independent state had created a railway department along normal hierarchical lines, dissolved worker committees in stations and workplaces, and begun to institutionalise worker representation through a centrally organised labour union that it could monitor and control. The tensions between local workers and the department of railways and between local worker committees and the new union leadership are at the core of the book.

The study argues that the early years after the declaration of independence, especially the first nine months, were a unique period: the power vacuum; the great excitement among ordinary people at the possibilities of independence; the local social movements that let loose decades of anger and frustration at local elites; and the real hope that with independence would come a more just and egalitarian society. Jafar contrasts the spontaneous actions of railway workers on stations and in workshops and the emergence of labour unions from below with the top-down unions of the colonial era. The contest between railway workers and central union leaders and between workers and their union and the state is discussed at length. Jafar is clearly sympathetic to workers’ self-management, which he sees as being at first corralled and then repressed by labour unions and political leaders alike.

It might be argued that the notion of ‘self-management’ of the railways in late 1945 and early 1946 needs greater clarification. After all, the large State Railways and the two major private railways based in Semarang and Yogyakarta were networks. It was somewhat romantic for workers to think that because they were in control of many of the stations they were actually running the railway networks. Train schedules, train maintenance, and the general logistics of the system were centrally organised. And, of course, workers were paid by the railway companies.

Jafar argues that the railway workers’ union, the SBKA, and all labour unions which emerged after the declaration of independence, owed little to the labour unions that had preceded them in the 1920s and 1930s: ‘[…] union formation during the revolution period was a development situated narrowly within a finite time frame which drew little from the colonial period.’ The five years after 1945, especially the nine months between August 1945 and mid-1946, were in many ways a break with the past and quite rightly Jafar reminds us of the unique aspects of this period in the history of Indonesia. However, at the same time, it is important to recognise the continuities between the post-independence years and the late colonial period. There were continuities in leaderships of labour unions, political parties, religious organisations, and socio-economic groups. In particular, there were strong similarities in the issues fought for by the labour movement post-1945 and those of labour unions in the preceding three decades. Much of the social and industrial agenda of the SBKA and other unions after 1945 was the agenda of labour unions in the 1930s.

The labour legislation of 1948, which established the basic industrial laws for the new state, owed much to the debate which had been going on in the labour movement since the 1920s and incorporated most of the major issues for which workers and their unions had long fought. The divide between colonial and post-colonial Indonesia is often blurred rather than sharp. Organising under the Revolution shows the importance of detailed studies of the post-independence labour movement. It is a welcome addition to the limited literature on the history of labour unions in Indonesia in the early years of independence.

Chapter 4 Building up Organisational Strength: The SBKA in Action