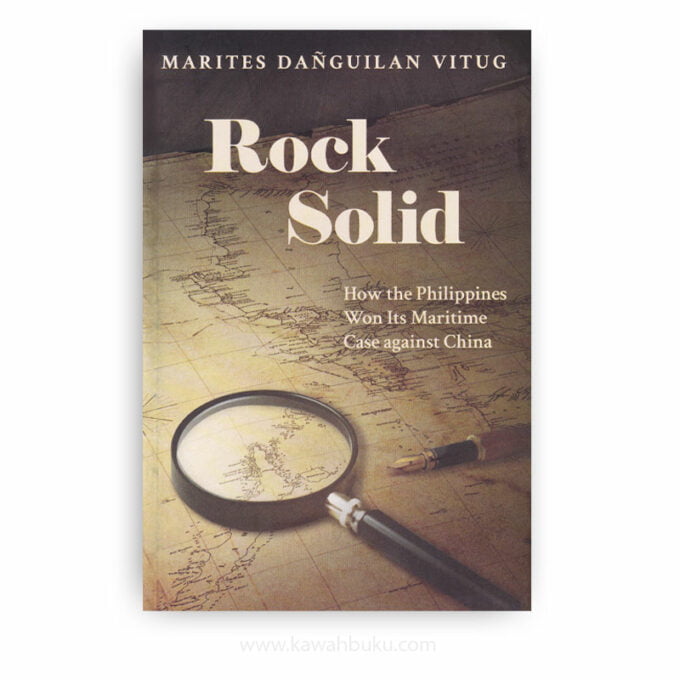 Rock Solid: How the Philippines Won Its Maritime Case against China

MARITES DAÑGUILAN VITUG is the editor-at-large for Rappler and president of the Journalism for Nation Building Foundation.

Rock Solid: How the Philippines Won Its Maritime Case against China is a comprehensive account of the epic legal success of the Philippines’ case before the International Court of Justice, seeking an arbitral ruling on the territorial boundary and border questions in the South China Sea. The author sees the “paramount importance” of the ruling to the protection of Philippine sovereignty and territorial integrity, but she also describes clearly the legal debates on interpretations of the UN Convention on the Law of Sea.

It behooves on the Philippines as an underdog victorious to recount its narrative not as a triumphalist but as a responsible member of the community of nations seeking to advance the rule of what is right over the impunity of what it might. Though certainly not of Homeric proportion although along with the same tradition, Marites Dañguilan Vitug’s volume exudes splendid chronicling indeed consonant with James Holmes’ counsel: “Having seized control of the narrative, Manila must hang on it … The Philippines must … tell its story well and tell it often”.

The author brings to print the intricate facts and impressions gleaned from her evidently meticulous perusal of official records and legal submissions, and animated first-person interviews of relevant policymakers, implementors, operators, and apologists, of people up in the totem pole to the ingenuous plebeians—foot soldiers, civil servants, and ordinary fishers and their families who bear the immediate fallout of any South China Sea claimant’s act of omission or commission. Through diligent excavations of the details and fact-checking, the author credibly portrays removing the chaff from the grain—distinguishing misleading propaganda and solipsism from unvarnished truth and the common good. The conscientious effort is evident throughout the volume’s twenty-two chapters subdivided into four general parts, and the attendant prefatory, explanatory, epilogue, and bibliographic sections.

In Part One, Vitug establishes the context of the historic day of 12 July 2016—when the Permanent Court of Arbitration (PCA), announced its ruling which is a windfall for the Philippine cause in the South China Sea contestation. She traces the contemporary origins of the Philippine claim datelining across various administrations – from the “super-secret” clandestine operations initiated by Marcos along with the res nullius rationale, the “shock” of Mischief Reef during Ramos, the final “occupation” under Estrada, the series of illegal acts of Chinese fishermen in Scarborough Shoal and the controversial seismic agreement between the Philippines and China then with Vietnam in Macapagal-Arroyo’s time, and then to China’s seizure of Scarborough Shoal under Benigno Aquino’s (PNoy) watch. Curiously enough, Vitug misses out on Corazon Aquino’s term but perhaps understandably as the “people power” tenure witnessed not much change in the so-called “dangerous grounds”.

In Part Two, Vitug delves on three considerations that can frame the Philippine position in the South China Sea dispute.

In Part Three, Vitug identifies the lead persons behind Manila’s decision to challenge Beijing in a new arena – via public international litigation. She presents the pegs which impelled them for the game-change. Also, Vitug dutifully propounds on the contributions of unrecognized legal and strategic experts as well as foreign affairs functionaries.

In Part Four, Vitug sets out the case in detail including the dynamics within and outside the halls of the PCA – on how an “absentee” China (188–189) and an “amicus” Taiwan sought to influence the proceedings and public opinion, on the Itu Aba dilemma and the extensive debates it engendered, on the ecosystemic consequences of China’s massive landfilling, and its mau-mau “cabbage tactic”.

In the Epilogue, the author appraises readers of the immediate post-PCA ruling period. It narrates a stunning sequel to the PCA verdict as the then newly-installed Duterte administration adopted an antipodean or diametrically opposed policy, from assertiveness to subservience vis-a-vis China. Vitug then shifts gear as she rounds up related international cases where even supposedly puny nations secured favourable rulings against arrogant behemoths and how the latter were compelled to give in to the former.

The author parses the pertinent South China Sea events and PCA developments. She decrypts contexts upon which the issues are embedded, for example, the significance of UNCLOS and windfall of consistent adherence, the attendant pros and cons of the ambiguity of the RP-US MDT, and how via astute lobbying and leadership, Malacañang forged a unified front amidst knotty divides.

Part Two. FACTORS THAT MATTER
Chapter 10 The American Conundrum
Chapter 11 The ASEAN Dance with China
Chapter 12 A “Constitution for the Oceans”

Part Four. THE CASE
Chapter 17 Going to the “Heart of UNCLOS”
Chapter 18 China: Absent Yet Present
Chapter 19 The Itu Aba Twist
Chapter 20 The Elephant in the Room
Chapter 21 When the Fish Disappeared
Chapter 22 Of Cabbages and Ships