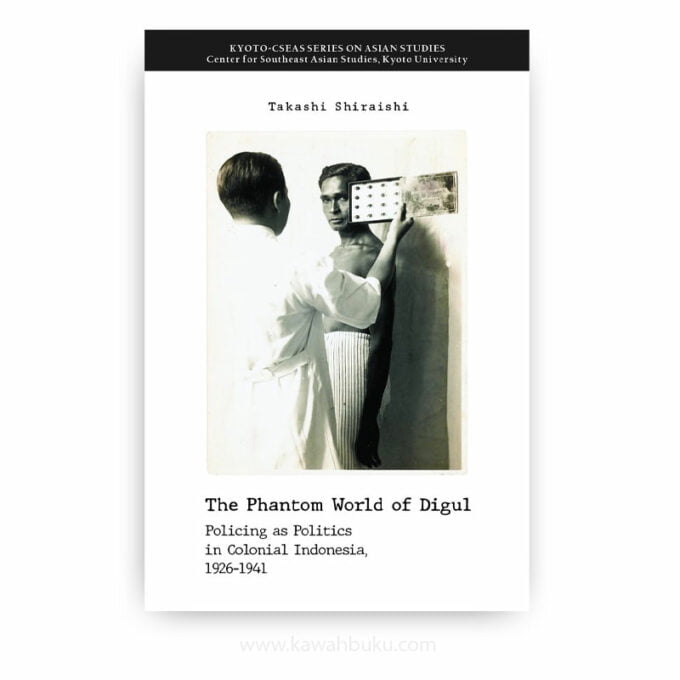 The Phantom World of Digul: Policing as Politics in Colonial Indonesia, 1926-1941

TAKASHI SHIRAISHI has taught at Tokyo University, Cornell University, Kyoto University, and the National Graduate Institute for Policy Studies (GRIPS). He currently serves as Chancellor at the Prefectural University of Kumamoto.

The Phantom World of Digul: Policing as Politics in Colonial Indonesia, 1926-1941 attempts to narrate and analyze the political-policing regime of the Dutch Indies and how it shaped, and was simultaneously shaped by, the rise of Indonesian nationalism. How nationalist politics came to be equated with the colonial police is both a sign of the success of this policing regime and a symptom of the failure of the colonial state’s long-term policies and objectives. For it was precisely this time of normalcy that incubated the revolutionary generation of 1945. These were formative years for once and future activists who would go on to play important roles in post-independence Indonesia. Some channelled their energies into literature and art others joined political parties and trade unions, still, others joined the military and the government.

In the final years of its imperial rule after the “communist” revolts in Java in 1926, the Dutch Indies colonial regime established an infamous mass internment camp, Boven Digoel, in the heart of the malaria-infested New Guinea on the fringe of the empire to force its inmates to live a normal life under abnormal conditions. Boven Digoel, Upper Digoel, so-called because it was located up the Digoel river, was not a penal colony. As the Indies government studiously made clear, internment was not a penal sanction but an administrative measure, invoked by governor general’s extraordinary powers, exorbitant rechten, to require the internee to live in a certain place.

Internment, and for that matter externment, was a long-established practice of the Indies state. In the twentieth century alone, Soerontiko Samin, a Central Javanese and the founder of the religion of Adam, was interned in West Sumatra in 1907. Tjipto Mangoenkoesoemo, a Javanese, was required not to stay in the Javanese language regions of Central and East Java in 1920 and then to live in Banda Neira in 1927. Communist leaders, starting with Henk Sneevliet and A. Baars and including Semaoen, Tan Malaka, Darsono, Hadji Misbach, and Aliarcham among others, were either denied their right to stay in the Indies or required to live in many different places of the eastern part of the archipelago in the years from 1919 to 1926. It was only in the years from 1927 to 1940 that all internees were exiled in the same place.

Nor was Digoel a concentration camp, the Dutch historian J. M. Pluvier reminds us, for it was different from the Nazi concentration camps “in the way in which the inmates were treated: no one in Digoel was mistreated or killed as in the German concentration camps. The Indies government, he should have added, just let inmates die, go insane, or be broken.

Indonesians understood better what it meant to be exiled in Digoel. There was no shortage of information in the Indies about Digoel. Virtually every new internment to Digoel and every new release from it were reported in Malay language newspapers, often accompanied with internees’ letters to their relatives and friends and their interviews. The government let Indonesians know about Digoel, no doubt, to scare them. Soekarno, always imaginative, was so terrified in a Sukamiskin prison cell in 1933 at the thought of living in Digoel, away from his mother and perhaps without his wife, that he asked for the government pardon in exchange for his quitting political activities and if necessary his cooperation with the government.

It was Soebakat, however, who perhaps understood the political meaning of Digoel best. A founder of the revolutionary underground political party, PARI (Partai Republik Indonesia), he invented a code for its internal communications, in which “General Hospital” signified Digoel, while “Hospital” meant prison and “Abu” police. In his imagined political landscape of the Dutch Indies policed by “Abu” and dotted with “Hospitals,” Digoel was the terminal destination for revolutionaries—in colonial Dutch parlance, onverzoettlijken, recalcitrants, incorrigibles, die-hards—suppressing the fear of which would make them real revolutionaries. Soebakat killed himself before being sent to Digoel to deny the secret police a chance to extract from him any useful information about the PARI. But if he had not killed himself, he would have found that Digoel, complete not only with its own prison, police, military garrison, vigilante groups, spies, and informers but also with its own second internment camp at Tanah Tinggi for onverzoenlijken, was a metaphor for the Indies, the colonial regime the Dutch fashioned in the final years of their rule.

Fourteen years after its establishment, one of the founders thus admitted that Digoel was a concentration camp, not even for “normal” internment, let alone for a normal life. Yet it survived for three more years, until 1943, two years after most parts of the Indies was occupied by the Japanese. That year the Indies government in exile in Melbourne became sufficiently worried about the possibility of the internees being liberated by the Japanese, so it decided to liquidate it altogether and to evacuate all internees to Australia. Evacuation was carried out by Ch. O. van der Plas and the camp closed in 1943.

Thus the history of the Digoel concentration camp came to an end and with it the last remnant of the political policing regime the Dutch fashioned in the Indies in the final years of their rule. The post-revolt years from 1927 to 1942 can be understood in this sense as the age of Digoel, for the normalcy in the Indies in these years was constituted fundamentally on the phantom world of Digoel. Digoel and its camps functioned both to refract and to reflect the normal, that is Digoel by definition demarcated the boundaries between the normal and abnormal, the cooperative and the recalcitrant, thereby separating the rational colonial order and the psychopathic fringe population, and in doing so it mirrored the very regime that institutionalized and marginalized it. Normalcy was thus contingent on a complex apparatus of policing that marked and partitioned colonial territory, subjects, and signs.

1. The Phantom World of Digul

2. A New Regime of Order

6. Politics in a Time of Normalcy