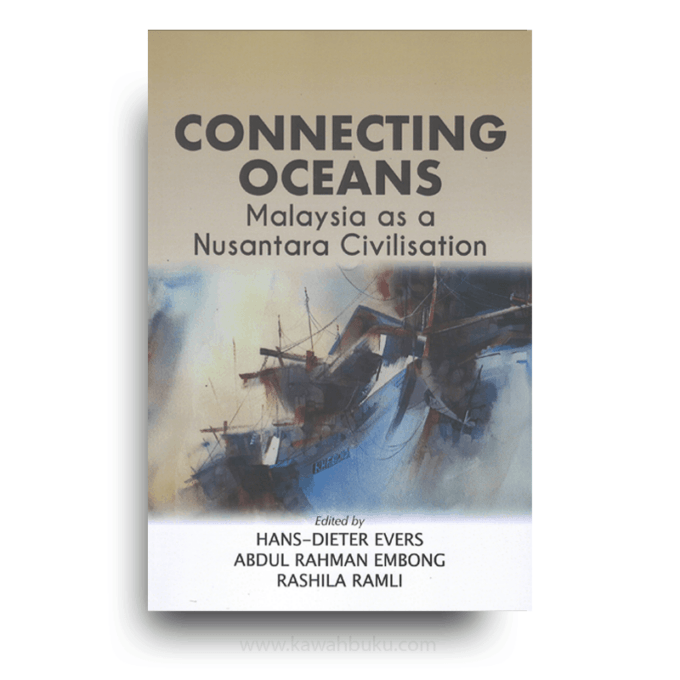 Connecting Oceans, Volume 2: Malaysia as a Nusantara Civilisation is a modest attempt to contribute towards the realisation of Wawasan ASEAN (ASEAN Vision) beyond 2020, that is, one of building cohesion through a new ASEAN community idea based on an inclusive Nusantara civilisation integrated with the civilisation of the land-based ASEAN societies, by adding to the scholarly literature based on discussion and research into the various aspects of both the historical and contemporary Nusantara civilisation, eventually leading to an integrated ASEAN community. Sandwiched between the great Indian and the great Chinese civilisations, the region is known as Southeast Asia is, indeed, also a great civilisation with its own distinct characteristics. Unlike its neighbours to the East and to the West, itis mainly a region of islands, peninsulas and inland seas. It is culturally and linguistically as diverse as its neighbouring civilisations, but it has never experienced the binding forces of great and powerful states. Majapahit has at times extended its suzerainty over a large part of the area. Melaka has been a powerful maritime state, without ruling over all Islands and the northern continental areas, but the spread of Malay as the lingua franca covered a large area.

First mentioned by 1305, the term Nusantara became a civilisational denomination to describe the core, if not all of the area. It is therefore justified to locate the Nusantara civilisation firmly between India in the West and China in the East. All chapters in this volume support this view, even though they highlight different aspects of the Nusantara civilisation, from literature and linguistic perspective to modern popular culture, hybridised communities and the role of port cities in the anti-colonial movements. Diversity is described as a distinct characteristic as is connectivity as a binding principle of the Nusantara.

Seeing the Nusantara civilisation as a major component of ASEAN is to reclaim the heritage and wealth of the region as a whole and transform it into a civilisational glue for the building of the ASEAN Community in the 21 century. All ASEAN states, except Laos, are maritime states in the sense that they have coastlines, deepwater harbours and a seafaring population and a maritime economy of fishing, maritime trade, sea transport, seabed exploration and shipbuilding. Through their Mediterranean seas, they are connected to the Indian Ocean and the Pacific Ocean and therefore to global trade and commerce. Connectivity in terms of cultural exchange, migration, trade and political alliances (and at times conflicts) has turned the areas around the South China Sea, the Straits of Malacca, the Java Sea and all the other inland seas into Mediterranean cultural and economic realms, in which Malay has been the lingua franca. Various chapters in Connecting Oceans, Volume 2: Malaysia as a Nusantara Civilisation highlight this connectivity. This has created a Nusantara world with a strong centre encompassing the states of Malaysia, Singapore, Brunei, Indonesia and the somewhat reluctant island world of the Philippines, a Fringe of states, whose capitals are connected to the Nusantara seas, but who also have strong connections to the Asian landmass.

Mainland-based ASEAN states Vietnam, Cambodia, Laos, Thailand, and Myanmar are *sandwiched’ between two Asian giants China to the east and India to the west, but they have been connected closely to their southern neighbours. They straddle between their historical connections to China (especially Vietnam, Cambodia and Laos) on the one hand, and their trading, sea-faring and cultural relations with the Nusantara seas and peoples on the other. Historically, they had served as an emporium for trade from Nusantara and vice versa, and being small and medium states, they are more naturally inclined to be part of the same entity, the ASEAN Community, having recognised the necessity of being together in a regional grouping as member states of ASEAN. In other words, the Nusantara civilisation is not an anathema to ASEAN, instead, it has been its historical dynamo, a civilisational repertoire which can be integrated together with the civilisations of societies in the land-based ASEAN member-states.