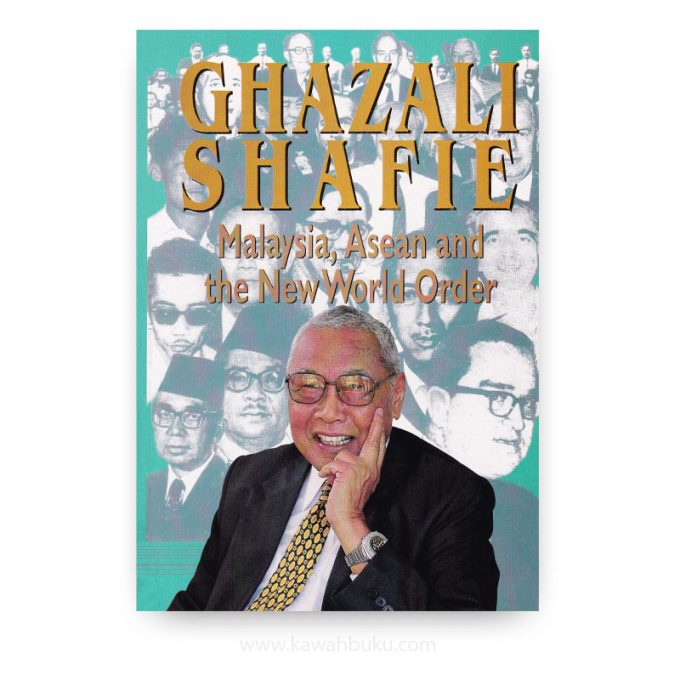 GHAZALI SHAFIE (1922–2010) was a Malaysian politician and diplomat. He served in the Cabinet under four Prime Ministers, most notably as Minister of Home and Foreign Affairs from 1973 to 1984.

Malaysia, ASEAN and the New World Order is a record of Gazali Shafie’s ideas in the form of speeches and papers as presented at various gatherings—both local and international—on a variety of issues including nation-building global economic challenges, conflict resolution, ASEAN and the New World Order. Ghazali Shafie has played a pivotal in charting the course of Malaysian foreign policy, first as a senior official at the Foreign Service and later, after his entry into politics, as Minister of Foreign Affairs. Leaving active politics, however, has not meant a total departure from foreign affairs for Ghazali Shafie has continued to serve the nation in realising its diplomatic goals. This has been possible mostly because of his close rapport with many of the world’s leading statesmen. Apart from his role in international diplomacy, Ghazali Shafie has exercised considerable influence in determining Malaysia’s socio-economic development, especially in the post-May 13 eras. As Minister with Special Functions, he was responsible for the formulation of the New Economic Policy and Second Malaysia Plan. In the context of nation-building, his central belief has been that of power-sharing as the key to enduring stability.

However, according to the author, those ideas are like a string of beads and consistent with the idea that humans from the household to the level of international relations, if peace were to abound there must be stability. It is the sine qua non for sustainable development with social and economic growth. The key to stability at any level of society is “power-sharing”. It is the willingness on the part of a family to share power or in a nation among the people and peace for all nations if power is shared. Malaysia has demonstrated this powerful concept. “Power shared endures” has kept the multi-ethnic multi-religious society which bristles with inter-communal problems, in peace and stability with the hitherto consequential independence and high growth. ASEAN a group is in the process of espousing this concept as evidenced in a number of ideas such as the Zone of Peace, Freedom & Neutrality (ZOPFAN) or the ASEAN FREE TRADE AREA (AFTA). It is this concept of “power sharing” as the basis of stability which has been constantly and consistently maintained in my thoughts, beliefs, words and actions.

1. Malaysia: Facing the Global Economic Challenges of the 1990s
2. Establishing a United Malaysian Nation
3. Democracy and Development
4. Political and Economic Issues in Nation Building – A Malaysian Experience
5. Issues and Responses in the National Setting: Malaysia and its Changing Political Economy
6. National Unity: Key to the Ultimate Malaysian Society
7. Conflict Resolution: The Malaysian Experience
8. Leadership, Development, Evolution of Culture: The Malaysian Experience
9. Creating a Malaysian Nation
10. The Making of a New South East Asia: Our Regional Vision
11. A Response to the Changing Security Environment in South East Asia
12. Into The Nineties: Global Economic Challenges and ASEAN Responses
13. ASEAN: Shortfalls of the Past and Pitfalls of the Future
14. ASEAN – Two and a Half Decades and Then What?
15. ASEAN: Twenty-Five Years and Beyond
16. History and Prospective Views of ASEAN
17. Experiences of ASEAN and Prospects of ASEAN – SAARC Cooperation
18. Managing Political Differences to Enhance Cooperation for Economic Development Among ASEAN Countries
19. The Bamboo Cluster Symbolises the Common Destiny of Asia
20. Blossoming Trade Blocs
21. Freedom: The Asian Perspective
22. Possibilities and Roles for Asia in the 21st Century: The Evolution of Asian Culture
23. Perestroika – European Home and the Islamic World
24. The Changing World: A Viewpoint
25. Economic Issues and Challenges in Vision 2020: International and Regional Ramifications
26. Cultural and Religious “Tolerance” in the Emerging International Order? The Challenge to Humanity
27. South-South Cooperation and South-North Axis: A Concept for the New World Order
28. The United Nations in the Post-Cold War Era
29. Asia Pacific Leadership Increasing the Role of Youth
30. Crafting The Future, Dismantling, Maintaining, Creating Lessons for South Africa
31. In Search for a New Order in The Post-Cold War Era
32. Leadership, Development, Evolution of Culture: The Malaysian Experience
33. Development and Cultural Evolution
34. United Nations Fifty Years – Political Perspective
35. Some Thoughts on Politics and Government in the Next Millenium
36. The Forum 1992: “East Asian Economic Development and Japan’s Role”
37. Tenth Regiment
38. EC-ASEAN Relations in a Changing Equation
39. Malaysia-Indonesia Relationship: Looking Back