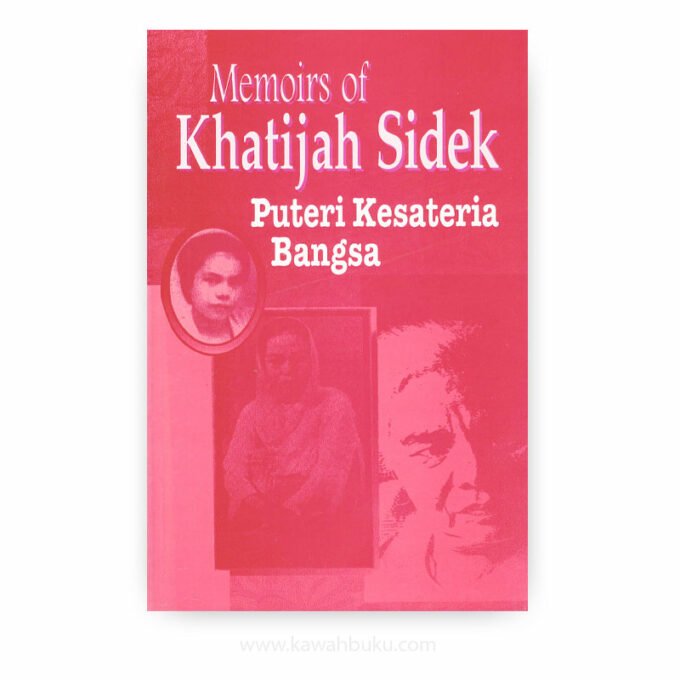 KHATIJAH SIDEK (1918–1982) or Che Khadijah Mohd Sidik was a Malay nationalist and politician during colonial Malaya and the elected leader of the Kaum Ibu (literally meaning “mother’s group”; the section name was later changed to Wanita UMNO) in 1954. She was a key figure in the early history of the United Malay National Organisation (UMNO) and a vocal campaigner of women’s rights and the education of girls.

This version is rendered from the original title My Story published by Ta Kung Pao, Hong Kong in Eastern Horizon during the early 1960s.

The text of Memoirs of Khatijah Sidek: Puteri Kesateria Bangsa has been edited from the serialized memoirs of the late Khatijah Sidek which appeared under the title, My Life and the pseudonym Ardjasni during the mid-sixties in the Hong Kong magazine, Eastern Horizon, published by Ta Kung Pao. It is believed to have been based on a translation from the original Malay of Khatijah’s memoirs, prepared in the early 1960s at the request of the famous author, Dr Han Suyin, who then lived and practised-medicine in Johor.

From her school days in Sumatra in the early 1930s, Khatijah (also spelt ‘Khadijah’) Sidek developed a concern for issues that later became the raison d’être of her political career, including nationalism, independence and the advancement of women. Her agenda for female emancipation then ranged from providing better knowledge of domestic needs, such as balanced nutrition and hygiene, to encouraging a more assertive role for women in public life. The latter was even more significant as it was pursued against the backdrop of a traditional feudal society. She dedicated herself to increasing Women’s awareness of their rights and responsibilities as citizens of independent nations.

She showed them the way to organize to become a social and political force. She fought for the recognition of women leaders and their contribution at the national level. As an activist for independence and women’s interests, Khatijah was bold, assertive and resourceful, inspiring later woman activists, especially in Malaya. She shattered the predominant image of submissive and politically uninvolved Malay women, drawing criticism from traditional and conservative quarters.

It could be said that Khatijah actually began her activist career with ARDJASNI, the student study group that she formed in 1935 while she was at the Normal School for women trainee teachers in Padang, Sumatra, where she developed her organizing and leadership skills. This was followed by her involvement in Semangat Bonda (1937), Puteri Kesatria (1944-50), Himpunan Wanita Indonesia dan Malaya (HIMWIM) (1947), Kaum Ibu UMNO (United Malays National Organisation Women’s Wing) Malaya (1953-56), and Dewan Muslimat PAS (1958-64). Her activities in Semangat Bonda and Puteri Kesatria had tested her ability to face opposition from traditional and conservative sections of society, as well as her single-mindedness in contributing to the Indonesian independence movement.

Later, the formation of HIMWIM in Singapore showed that she was also a political strategist who could adapt her activities to her new situation. She organized HIMWIM as a multi-racial organization for women in Singapore, thus recognizing the potential role and contribution of non-Malays and the more subtle nature of British colonial policy, compared to the more repressive Dutch policy in Indonesia.

In Malaya, Khatijah’s leadership and initiatives in Kaum Ibu UMNO formed an important milestone in the movement’s emergence and development. Apart from increasing its membership by popularizing the movement among rural women, she made important contributions in democratizing the leadership and balancing the membership. The Kaum Ibu UMNO began to shed its exclusive, urban and elitist image. Her programmes increased the general social and political awareness of Malay women in 1950, explaining the political aims of UMNO at the grassroots, and generally strengthening the foundation of UMNO’s popular support, which it continues to enjoy until today. Similarly, when she jointed PAS’s women’s wing, the Dewan Muslimat, sometime after she was ousted from UMNO in 1956, Khatijah’s presence provided them with a radical alternative model of a Malay Muslim woman activist. She had strong Islamic faith and courageously acted upon her principles for the sake of the people, against colonialism and male chauvinism.

Khatijah was staunchly anti-feudalist. For her, a true leader of the people should be from among the people. She criticized the UMNO leadership of the 1950s and early 1960s as feudalist and elitist. In her opinion, they were generally insensitive to the feelings and needs of rural folk who made up the great proportion of the rakyat (people). By the 1960s, she was of the opinion that the government policies of the independent Federation of Malaya oppressed and condoned exploitation of the rakyat, so much so that merdeka (independence) actually had little meaning for them.

This was particularly so since she believed that independence should involve the proper management of the nation’s natural resources to advance the general economic and social condition of the people. By then, she still did not see this happening, especially among the Malays who were mostly in the rural areas. This further motivated Khatijah’s efforts to raise the people’s awareness of their rights and opportunities to influence decisions in the democratic system adopted by the newly independent nation.

In view of her significant contribution to the course of Malaysia’s political development, the publication of Khatijah Sidek’s political memoirs is a small token of our appreciation of her dedication and sacrifices.

1. My Life
2. Fight for Merdeka
3. Collective Strength
4. We Are One People
5. Life in Prison
6. Merdeka Restaurant
7. Communalism in Malaya
8. Malayan Women and Merdeka
9. Kaum Ibu UMNO
10. Seats for Women
11. Trying to Earn a Living
12. Independence Day
13. My Ideals for Today