Kawah Buku > History > Malaysia > Palace, Political Party and Power: A Story of the Socio-Political Development of Malay Kingship
Out of stock 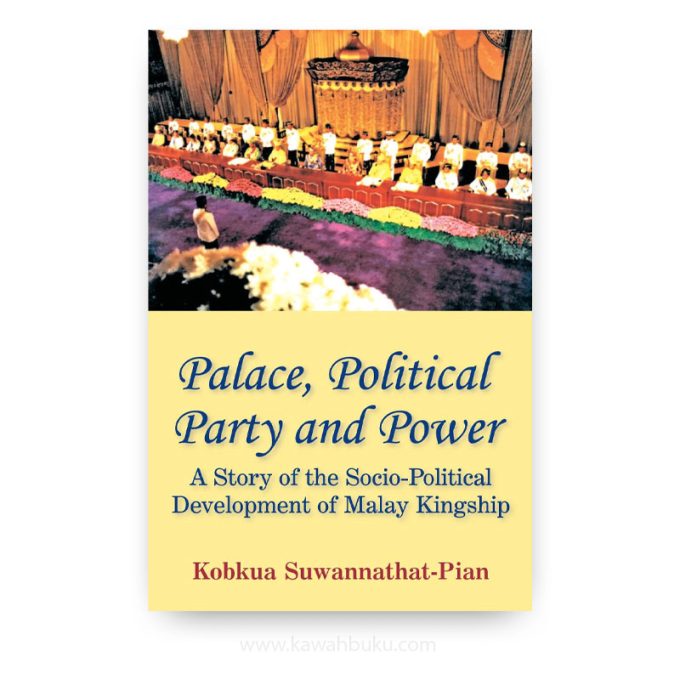 Palace, Political Party and Power: A Story of the Socio-Political Development of Malay Kingship

KOBKUA SUWANNATHAT-PIAN is Professor of History and Senior Fellow at the Faculty of Social Sciences and Humanities, Universiti Pendidikan Sultan Idris (UPSI), Tanjung Malim, Perak, Malaysia. She is an acknowledged authority on Thai-Malaysian relations and contemporary Thai socio-politics.

Palace, Political Party and Power: A Story of the Socio-Political Development of Malay Kingship traces the history of Malay rulers in the Malay Peninsula from the late colonial period to the first decade of the 21st century. The study begins with a brief discussion of the development of Malay kingship from the Melaka Sultanate to the colonial period. Exposing the ‘misleading’ and ‘self-serving’ claims of early scholar-administrators that Malay rule was nothing but ‘oriental despotism’, Kobkua argues that by the time of British intervention the principle of royal legitimacy had shifted from unquestionable divine right to personal competence and virtue. She then examines the reduction of monarchical power and authority under foreign rule.

Between 1874 and 1941, the British stripped sultans and rajas of their power but endeavoured to embellish their status. The Japanese reduced them still further to ‘mere ordinary subjects of the Emperor’; by 1945 Malay Rulers were unable to offer protection to their subjects who in turn would ‘abandon their traditionally unquestioned loyalty and obedience to the Rulers’. The shift in popular support from princes to politicians and the swings in their relative fortunes are the subject of the next four chapters. Chapter 4 provides an account of the restoration of British control in 1945 and the imposition of the Malayan Union which removed vestigial sovereignty from the Malay rulers and special status from the Malay people. This crisis in Anglo-Malay relations brought together sultans and tribunes of the people in an uneasy alliance which forced the British to abandon the Malayan Union and at the same time initiated a leadership competition between Malay elites.

Kobkua declares ’round one’ to have been ‘a draw’. ‘The real contest’ got underway once the Malayan Union had been replaced by the Federation in 1948. Dato Onn (founder-president of UMNO) promoted his claim to represent the Malays and the wider nation. Led by Sultan Badlishah of Kedah, the Rulers fought back. By the end of 1951 Onn had left UMNO and it ‘was clear that the colonial officials… would prefer to deal with the Rulers in matters concerning the future of Malaya than with UMNO or any other groups representing the Malayan masses’.

The hero of the rest of Kobkua’s story is Tunku Abdul Rahman, whose own accounts form her principal source and whose biography she is currently writing. Between 1951 and 1957 the Tunku made UMNO ‘the undisputed champion of the Malays’, forged the Alliance of UMNO, the Malayan Chinese Association and the Malayan Indian Congress, won a landslide electoral victory, neutralised the political pretensions of the Malayan Communist Party, and controlled the independence negotiations. Kobkua sticks with the winners; apart from Dato Onn’s ventures with the Independence of Malaya Party (IMP) and the Party Negara, alternatives to UMNO and the Alliance scarcely feature. Though himself the son of a sultan, the Tunku was mistrusted by the Rulers, as Onn had been.

When independence approached, however, he won them over by guaranteeing them a position in postcolonial Malaya that ‘was much more meaningful politically, and more honored and esteemed socially than … they had ever enjoyed during … colonial rule’. The Tunku’s successors, however, were less inclined to accommodate the whims and failings of self-indulgent and politically myopic Rulers, and Mahathir Mohamad clipped their wings. More recently a new generation of enlightened royals has been attempting to rejuvenate the Malay monarchy and, Kobkua suggests, at a time of political uncertainty and corruption, Malaysians may come to place greater trust in the ‘just king’.

1. Introduction: the monarchy
2. Malay kingship under British colonial rule:only form and no substance, 1874-1930s
3. Malay kingship under Japanese occupation, 1941-1945
4. Malay rulers and Malay subjects, round one-Malay union, a draw, 1946
5. And the real contest began, round two-advantage to the rulers, 1948-1951
6. The battle royale, round three- UMNO, the ultimate victors, 1951-1955
7. Roles reversed: UMNO, rulers and constitution or a march toward independence and UMNO supremacy
8. Living happily ever after? the rulers-UMNO post-independence relations