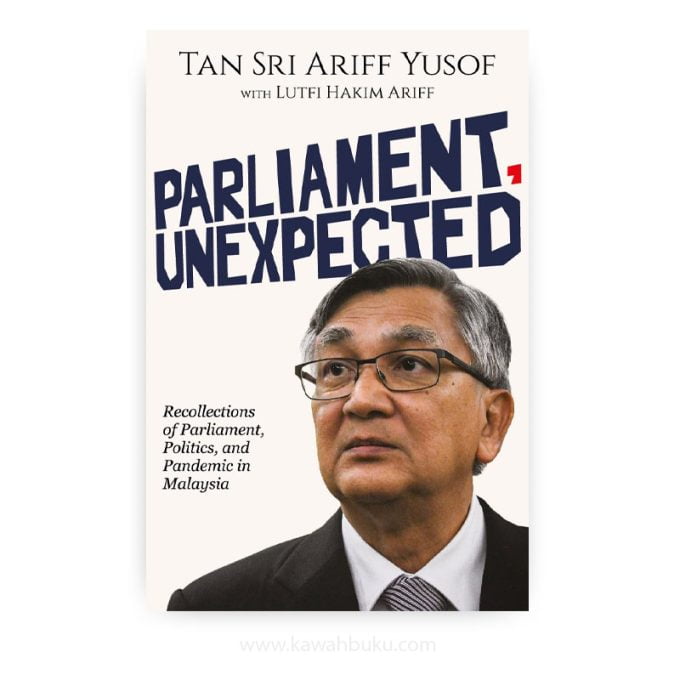 Parliament, Unexpected: Recollections of Parliament, Politics, and Pandemic in Malaysia

ARIFF YUSOF was the Speaker of the Dewan Rakyat, Parliament of Malaysia from July 2018 to July 2020. Prior, he served as Judicial Commissioner, High Court Judge and subsequently a Judge of the Court of Appeal from 2008 to 2015.

Parliament, Unexpected: Recollections of Parliament, Politics, and Pandemic in Malaysia is an autobiographical journey to understand the sources of our political dysfunction, and what needs to be done to reset and retell the Malaysian story for a fairer, kinder and more equitable tanah air for all. In this recollection of his short tenure as the Dewan Rakyat Speaker, Tan Sri Ariff Yusof, reveals his side of the story—dissecting the events and procedures of Parliament while providing an insider’s view of the unprecedented political developments that led to the fall of the Pakatan Harapan government in 2020 and his eventual removal. Meanwhile, a global pandemic starts to rage and was met with faltering response from the government, and a suspension of Parliament.

As for the main part of the book, the author dwells on the events and incidents during his tenure which he hopes will shed some light on the mechanisms and processes of the government’s highest legislative body, the Parliament. The readers will take a close look at some of the more notable decisions that were made during his brief tenure, and the author tries to explain them as well as the instruments involved for the reader’s benefit. What this means is that this book is neither a straightforward memoir of the author’s experiences, nor a dry academic text that explains parliament’s functions. Instead, there is a bit of both in hopefully enough measure to make this book a satisfying experience.

PART ONE: THE BEGINNING

CHAPTER 1: A Short History of Everything, Not Quite a Memoir
CHAPTER 2: Jumping Into the Fray
CHAPTER 3: An Unnecessary Show of Partisan Politics
CHAPTER 4: No. 3, JALAN Tunku, Bukit Tunku

CHAPTER 5: Taking Charge
CHAPTER 6: Speaker, You’re Our Boss!
CHAPTER 7: Point of Order!
CHAPTER 8: The Bad, the Crude, the Obscene and the Literary