Kawah Buku > Law Studies > Federal Constitutions: A Comparative Study of Malaysia and the United States
Out of stock 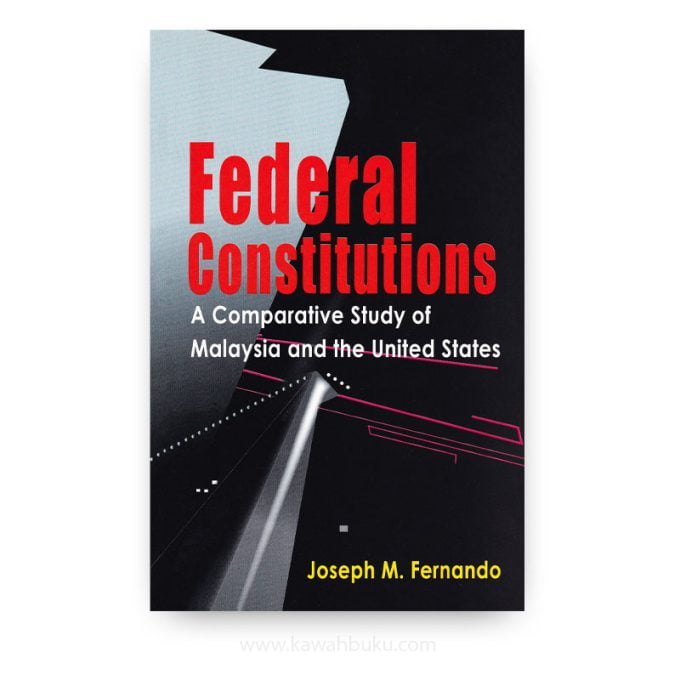 Federal Constitutions: A Comparative Study of Malaysia and the United States

JOSEPH M. FERNANDO is an Associate Professor in the Department of History, Faculty of Arts and Social Sciences, University of Malaya, Malaysia.

In the Malaysian context, there have been very few efforts to study the comparative elements in the constitutions of Malaysia and the United States. John Doraisamy and Mahadev Shanker have discussed briefly American constitutional influence in two papers presented at the 1987 American Studies National Seminar in Kuala Lumpur organised by the Malaysian Association for American Studies.

Comparative studies of constitutions form a valuable approach to the study and understanding of constitutional history. They provide a deeper understanding of the system of governance in a comparative perspective and the underlying philosophies; of the reasoning behind the emergent pattern and structure of government; of the distribution of powers between the various organs of government and between the states and the central government; the intentions of framers and the difficulties faced by the draftsmen, in differing circumstances and periods in time.

Most countries have had to adapt ideas they borrowed from other constitutions to suit local conditions. Perhaps, equally important, comparative studies offer varied perspectives on a set of fundamental laws that governs the relationship between the rulers and the subjects and which is central to the functioning of most modern governments. Constitutions in a sense can be better appreciated if viewed from a comparative angle and not merely from an analytical or descriptive discourse because of the different and varied sources from which they draw their legitimacy.

Federal Constitutions: A Comparative Study of Malaysia and the United States based largely on primary sources is thus conducted in this spirit of inquiry and scholarship. By examining the similarities and distinctions between important aspects of the two constitutions, it is intended to explore the ideas of government and governance of the framers of these constitutions and to deepen our understanding of constitutional history. It is not intended to evaluate the merits of the provisions or systems or to glorify them but purely to understand the reasoning behind the federal principles enshrined in the constitutional provisions. The writer chose to study the constitution of the United States because it was the first of its kind in the modern era wherein a group of states sought to codify a set of basic laws to create a broad power-sharing federal arrangement and define the power and limits of the central government and the member states. The federal principles embedded in US Constitution are particularly interesting because they share some similarities with Malaysia’s federal constitution framed in 1956-57.

The main objective of Federal Constitutions: A Comparative Study of Malaysia and the United States is not so much to find the elements in the Malaysian constitution that may have been borrowed from the constitution of the United States but rather to consider the similarities and distinctions between the federal principles enshrined in the constitutions of these two countries and to understand the underlying raison d’être and in particular the intentions of the framers. Creating a modern form of government amid the older feudal and monarchic states then was a novelty and a radical innovation, and the debates among the framers provide an extraordinary insight into the minds of the peOple who drew the constitutional document and the challenges of their times.

The framers of the US constitution were aware of the global significance of their undertaking and accorded the process utmost respect and importance. Gouverneur Morris, for example, said in attending the convention he felt in some degree as a ‘Representative of the human race’ for the whole human race will be affected by the proceedings of this convention. He called on the delegates to ‘extend the views beyond the present moment of time; beyond the narrow limits of place from which they derive their political origin.’

The drafting of the Malaysian constitution was no less significant historically. The framers knew that they were creating a constitution that would shape the political, economic and social contours of the post-colonial nation-state. The leading role of the Alliance party in the constitutional process is well documented although not as recognised or appreciated. The Reid Constitutional Commission put to paper the ideas and agreements of the Alliance contained in their joint memorandum, which represented inter-communal compromises, while introducing innovations of their own.

The Alliance elites were also traversing new paths among the emerging nation-states in the Commonwealth. They chose a system of parliamentary democracy based on the Westminster model of governance and for which they had received years of tutelage in the post-war period. The democratic form of government based on parliamentary institutions is the form of government best suited to Malaya, declared the then Chief Minister Tunku Abdul Rahman who headed the ruling Alliance coalition. In the process, the Malaysian constitution drew from precedents and practices in the Commonwealth and the United States.