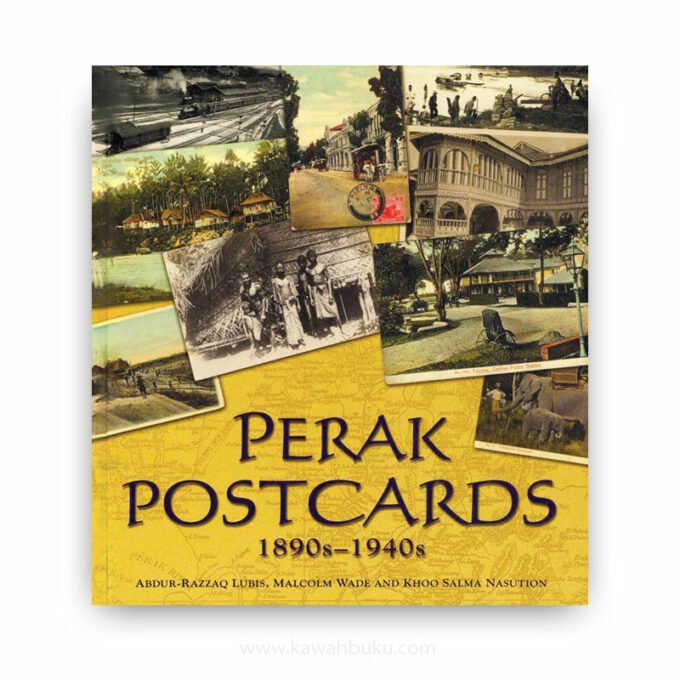 MALCOLM WADE is a stalwart of the Malaya Study Group and has written an authoritative postal history of Perak.

ABDUR-RAZZAQ LUBIS is a leading authority on the Mandailings in Malaysia.

Perak Postcards, 1890s-1940s represents the largest such collection ever assembled into one volume, with more than 500 picture postcards contributed by several collectors. Practically all the major Perak districts and towns are featured — Ipoh, Taiping, Kuala Kangsar, Telok Anson and the mining towns of Kinta. Once the premier state of the Federated Malay States, Perak pioneered tin mining, rubber, roads and railways in Malaya. In the early twentieth century, Europeans and Asians venturing into this frontier country bought picture postcards to send home to family, friends and pen-pals all over the world. The modern postal system in Perak was established when the Taiping Post Office was set up in 1876. Over the next 20 years, the postal system was extended in line with the expansion of the colonial administration in Perak.

Soon after the British intervention into Perak, ‘regalia elephants’ belonging to the state were employed, but the cost of their maintenance was high. Horses were also used, and ‘Police and Road Officers’ were allowed to draw horse allowances. Cart and cattle, previously in service, were abolished in 1876 and the remaining animals sold off. Mail carts drawn by ponies—Perak’s version of the ‘pony express’—were used well into the twentieth century. The state announced in 1882 that the government would push ahead, as its revenues permitted, in ‘opening up the country in every direction, by railways, roads and bridle paths, and by clearing the numerous and valuable waterways in its rivers’.

Frank Swettenham emphasised the necessity of constructing the trunk road after a tour of the state over land and water, which took him 30 days to accomplish. He had to travel by boats, elephants, horses and on foot. The year 1884 saw a frenzy of road construction and river clearing. A road network linking Province Wellesley in Penang, in the north, to Malacca in the south, was contemplated. Due to the hilly terrain, it was difficult to connect the ‘headquarters’ in Kuala Kangsar and the important districts east of the Perak River, ‘a journey from Kinta to Kuala Kangsar being made usually via Teluk Anson, Penang and Larut’.

It was determined to construct a road from Kuala Kangsar southward to Uly Bernam to meet the trunk road recently made by the Selangor government. This would form an uninterrupted highway from Malacca to Butterworth, traversing a distance of about 365 miles. A branch road from Tapah to Teluk Anson, 24 miles long, was also part of this scheme. The more important branch, 50 miles long, from Kuala Kangsar to Kuala Kenering in Upper Perak, was already under construction.

The construction of the Trunk Road and the branches to Teluk Anson and Upper Perak will lead to a very great improvement being made in the postal services to many distant stations which have hitherto been outside the limit of road communication. By 1887 the system of roads had been improved and extended as much as labour permitted, and a railway was now being considered. The government was able to boast, by 1892, that ‘many miles of metalled cart road in Perak are equal throughout their length to the best roads in Singapore’.

Perak, The Abode of Grace

Introduction: The Postal History of Perak