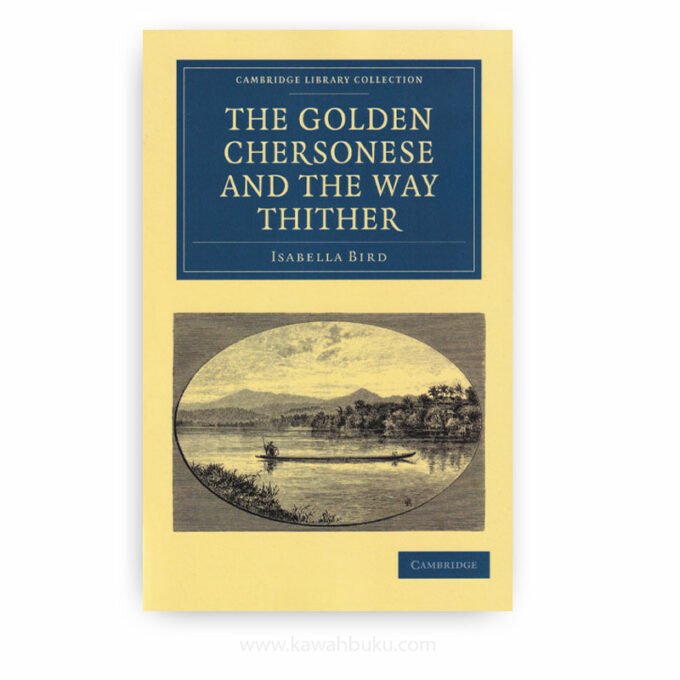 The Golden Chersonese and the Way Thither

ISABELLA BIRD (1831–1904) was one of the most famous Victorian female explorers, and the first woman to be admitted to the Royal Geographical Society.

The Golden Chersonese and the Way Thither is an evocative account, first published in 1883, of the final expedition to the East by Isabella Bird (1831–1904), who was one of the most famous Victorian female explorers, and the first woman to be admitted to the Royal Geographical Society. The Golden Chersonese is the ancient name for the Malay Peninsula, as named by the Greek geographer and astronomer Ptolemy. The book is a collection of twenty-three letters written by Bird to her ailing sister, Henny, in Scotland. Henny died as the book was published and Bird dedicates the book of letters to her memory.

As well as giving detailed descriptions of her travels and adventures in and around Malaysia, the book also includes fascinating accounts of many aspects of the region, including the people, culture, landscapes and wildlife. It also contains a number of delightful illustrations and a thorough appendix.

Isabella Bird’s book was east in quite a different mould. She herself represented the class of cultivated leisure travellers who, half a century after Begbie had stumbled through the Naning forests, were visiting the Peninsula in considerable numbers (at least thirty-two of them subsequently published their experiences in book form during the eighteen-eighties alone). The lady herself was an inveterate traveller who had already published books on North America and the Sandwich and the Hawaiian Islands, who was in process of preparing a volume on Japan, who would subsequently write others on Persia, Tibet, Korea, and the Yangtzu valley, and who in 1892 would become the first woman fellow of the Royal Geographical Society. Her journey through the Malay States was unpremeditated, the result of a chance invitation when she called at Singapore on her return voyage from Japan in 1879.

Although it lasted only five weeks she was able to imbibe, and subsequently recreate, the authentic atmosphere
of life on the Peninsula at that time. Her book takes the form of letters to her sister describing the various places she visited and the peoples she met both in the Straits Settlements and the Protected States, and in Hong Kong, Canton, and Saigon, together with sundry background material drawn mainly from T. J. Newbold’s Political and Statistical Account of the British Settlements in the Straits of Malacca (1839) and John Crawfurd’s A Descriptive Dictionary of the Indian Islands and Adjacent Countries (1856). It is this formal supplementary material in four chapters that is the least satisfactory part of the book.

1. The steamer Volga
2. A delightful climate
3. The S. S. Kin Kiang
4. ‘Faithful unto Death’
5. Portuguese missionaries
6. A Cochin China river
7. Beauties of the Tropics
8. St. Andrew’s Cathedral
9. The Lieutenant-Governor of Malacca
10. Malacca mediaevalism
11. A Mangrove swamp
12. The tomb of a ‘great prophet’
13. The appurtenances of civilisation
14. The S. S. Rainbow
15. Tiger mosquitos
16. A yachting voyage
17. The Dingings
18. Province Wellesley
19. The Chinese in Larut
20. Novel circumstances
21. A Malay interior
22. A pleasant canter
23. Gang murders