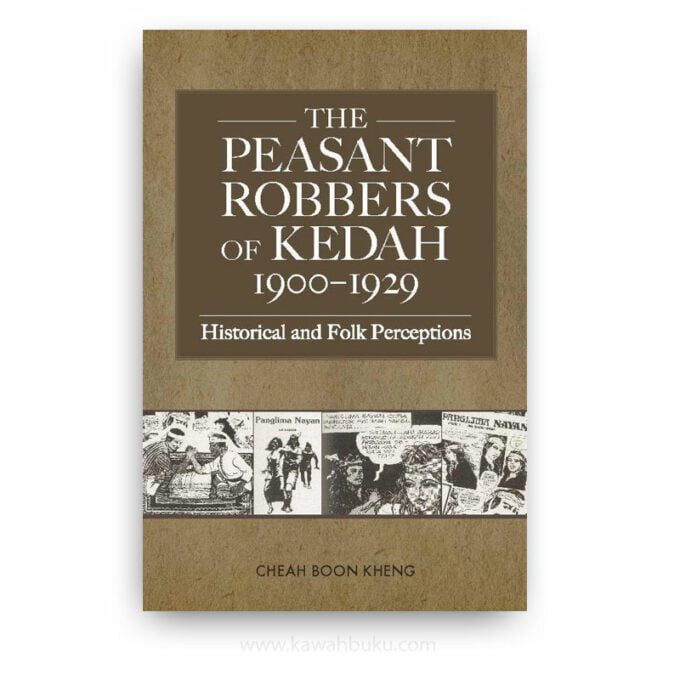 The Peasant Robbers of Kedah, 1900-1929: Historical and Folk Perceptions

CHEAH BOON KHENG was formerly Professor of Malaysian History at Universiti Sains Malaysia in Penang. He is also the author of Red Star Over Malaya: Resistance and Social Conflict During and After the Japanese Occupation, 1941-1946 and To’ Janggut: Legends, Histories, and Perceptions of the 1915 Rebellion in Kelantan.

The Peasant Robbers of Kedah 1900-1929: Historical and Folk Perceptions is an account of peasant banditry and the society where it flourished draws on colonial records, literary sources and interviews in Kedah in between 1900 to 1929. In the early twentieth century, social banditry was endemic in the countryside near the border between the northern Malaysian state of Kedah and Siam, and some outlaws became local heroes. Cheah Boon Kheng’s account of peasant banditry examines the circumstances that led the Governor, Sir Laurence Guillemard, to call the border area one of the most lawless and insecure districts in British Malaya during the 1920s. Considering banditry from the perspective of the peasant community, Cheah concludes that it grew out of lax government, weak policing, the geography of the border region and underdevelopment, and suggests that bandit heroes might be seen as symbols of rural protest. His discussion of the details of rural life in the early twentieth century and the conditions that underlay rural crime provide a unique social history of rural society in Malaya.

The idea for The Peasant Robbers of Kedah 1900-1929: Historical and Folk Perceptions first originated after the author had read Eric Hobsbawm’s fascinating study, Bandits. Cheah wondered if Malaysia ever had social bandits of the Robin Hood type. One day in 1975, in the library of the Australian National University in Canberra, he came across a book in Malay entitled Panglima Nayan: Robin Hood Malaya by Mansor Abdullah, published in Penang in 1960. Half-fiction, half-history, it described the activities of a Malay peasant robber who operated in the central plains of Kedah. The author was convinced the outlaw was a historical figure because the author had included a year—1921—for an incident in the story. The author narrated why Nayan robbed the rich to help the poor, became a panglima (captain or commander), led a gang of robbers, fell in love with an Acehnese merchant’s daughter whom he had kidnapped, and then was killed by a robber-colleague in a police ambush. How much of the Nayan Story was true? Was it an invention of Mansor Abdullah’s or was it taken from an oral tradition?

These were questions to which the author was anxious to get answers, but they had to wait until 1978 when he took up the appointment as a lecturer at Universiti Sains Malaysia in Penang, which is close to the state of Kedah. The author’s intention to do research on “Panglima Nayan” was supported by Jim Scott, an American political scientist who was then a visiting professor at the university’s School of Social Sciences. Jim himself was working on some aspeCts of class Struggle among the Malay peasantry in the Yan district of Kedah and had heard about the legend of Nayan from his peasant informants. He was very keen for Cheah to visit his village to talk to people there.

The author’s faculty colleague, the Kedah-born writer, Shahnon Ahmad, also told him that he had been familiar with the bandit’s story ever since he was a boy in the village of Sik. Whenever the author met Kedah Malays, whether in Penang or in Kuala Lumpur, he asked about the legend of Nayan. Everyone seemed to have heard of him. This made the author think it strange that so little had been written about a bandit whose story was so well known to many people in Kedah. Clearly, Nayan was the subject of a vibrant and “live” oral tradition. Assisted by grants from Universiti Sains Malaysia, Cheah began research to collect stories and information about the outlaw and his legend and to establish the basis of the legend. The research has taken him seven years, and in the course of his investigations, the author discovered the existence of a teeming rural underworld in the northern border districts of Kedah.

The Peasant Robbers of Kedah 1900-1929: Historical and Folk Perceptions contains the materials and findings of his research. The author only regrets, however, is that despite all his earlier enquiries and research efforts, he had been unable to find and interview the author Mansor Abdullah before his book was published in 1988. It was not until the year 2006 that the author met someone who had read his book and who informed Cheah that he knew Mansor. They arranged a meeting in Penang with that individual. Mansor, in poor health, had retired as a schoolteacher and lived in Kedah. During their meeting, he confirmed that his book Panglima Nayan was half-fiction and half based on his childhood recollections. He was totally unaware of the police reports on the bandit Nayan that the author had found in the Kedah archives.

This innovative volume broke new ground in Malaysian studies when it first appeared in 1988. This second edition is intended for the work to reach a new audience.

Introduction – Social Banditry and Rural Crime “from Below’: A Theoretical Perspective

3. Nayan as Outlaw and Nayan as Folk Hero: Historical and Folk Perceptions
The Geographical Setting
Mansor Abdullah’ Account
As Others Saw Him and
The Local and Remote Bandit
Nayan’s Rural Underworld The Incomplete Transcript
The Historian as Detective
Nayan’s Breakup with Sulaiman
The Legend of Nayan

4. Din Prum, the Police, and the Peasant Community: A Profile of Rural Criminality