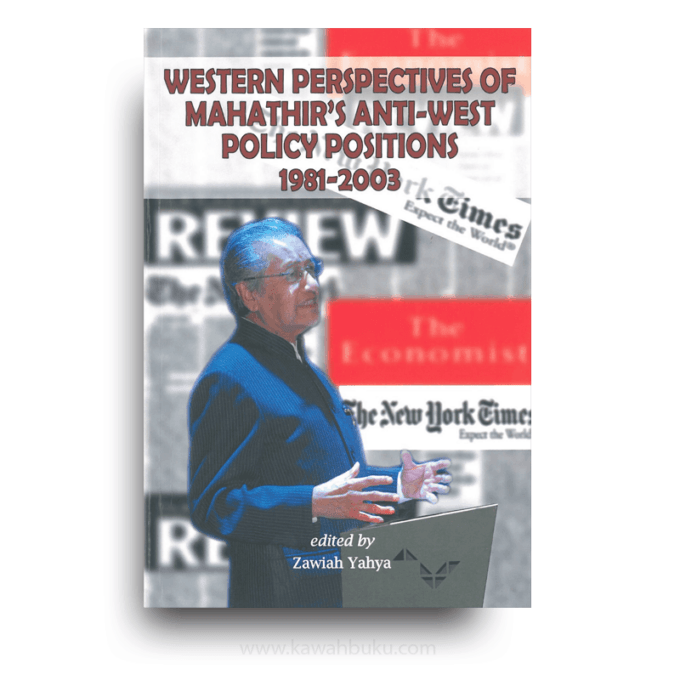 Western Perspectives of Mahathir’s Anti-West Policy Positions 1981-2003 focuses on Mahathir’s foreign policies that have outraged the West during his long period of rule (1981-2003). Written by experts from different fields who employ an interplay of diverse perspectives, the book analyses Western perceptions of Mahathir’s Malaysia as reflected in their media and, in turn, critically examines the western gaze to uncover its biases and agenda.

This book, therefore, offers more than information and knowledge of the Mahathir-West tensions at a particular period of Malaysian history; it offers a multi-disciplinary way of looking at how others perceive ‘us’ and ‘themselves’, and how we perceive ‘others’ and ‘ourselves’. More importantly, the book offers a possibility of a collective Malaysian perspective despite its diversity. It is a useful read for scholars, students, policymakers, and the public who are interested in understanding Malaysia-West contestations that shaped Malaysia’s history during the Mahathir era and to draw appropriate lessons in order to move forward in the 21st century.

Malaysia’s relations with the West were unproblematic in the post-Independence era between 1957 and 1981, but the ascension to power of Mahathir Mohamad, the fourth Prime Minister of Malaysia (1981-2003), led to a number of policy changes that strained relations between Malaysia and Western governments. The Mahathir era saw the end of Malaysian foreign policies that had privileged Western interests. It started with his “Buy British Last” and “Look East” policies, his subsequent anti-Westem and anti-Zionist criticisms, followed by his proposal for the formation of the East Asia Economic Group (EAEG) as an alternative to the Asia-Pacific Economic Cooperation (APEC), his espousal of community-centered Asian values as against the individualism of the West and his anti-globalization disdain for the Eurocentric interpretation of all human issues.

All of these positions often described as ‘anti-West’, had provoked unfavorable reactions from Western governments, particularly from the United States as leader of the Western world. These negative reactions when reported in real-time by the powerful American press, in particular The New York Times, had greatly influenced the collective consciousness and perspective of its readers.

The five writers of Western Perspectives of Mahathir’s Anti-West Policy Positions 1981-2003 come from different areas of expertise and this is reflected in the way the analysis is done in their individual chapters. The Malaysian context of Mahathir’s anti-West position in Chapter 2 is explained by a socio-political-economic expert in Malaysian studies; the historical perspective of two experts in History structures the narratives of Chapters 3 and 4; the economic perspective in Chapter 5 informs the analysis of Western reactions to Mahathir’s economic proposals, and discourse analysis of Western press reports in Chapter 6 uncovers a hidden Western bias and agenda. Certainly, the Malaysian perspective is not monolithic and there is no attempt in the making of this book to streamline differing Malaysian points of view on any issue but through this book, one can still speak of the collective Malaysian perspective when understood in all its diversity and dimensions.

Western Perspectives of Mahathir’s Anti-West Policy Positions 1981-2003 then offers more than information and knowledge of the Mahathir-West tensions at a particular point in Malaysian history. It offers a multi-disciplinary way of looking at how others perceive us and themselves, and how we perceive others and ourselves. More importantly, it offers the possibility of a collective Malaysian perspective.