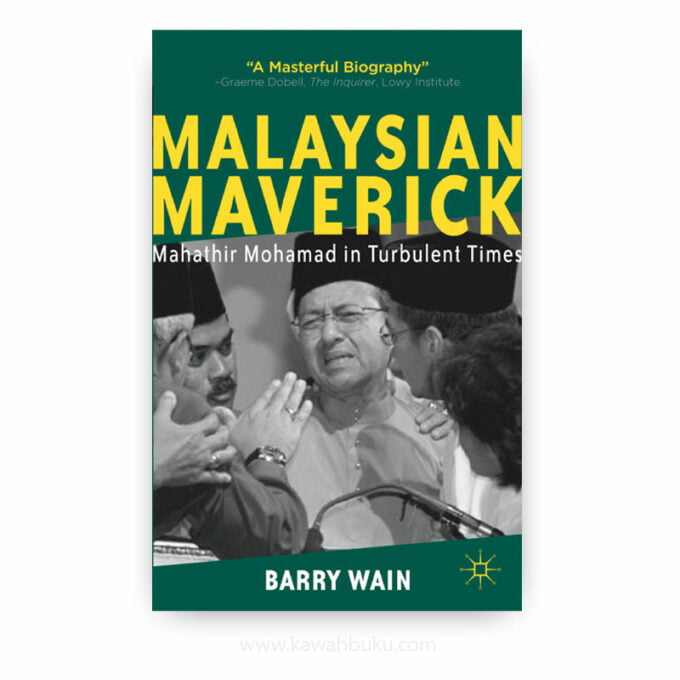 BARRY WAIN (b. 1944 – d. 2013) was a former editor of the Asian Wall Street Journal, is Writer-in-Residence at the Institute of Southeast Asian Studies in Singapore. An Australian journalist who has lived in Asia for 40 years, he is the author of The Refused, an account of the refugee outflow from Indochina after the Vietnam War.

Malaysian Maverick: Mahathir Mohamad in Turbulent Times is a biography of Mahathir Mohamad written by the Australian journalist Barry Wain. The grandson of an Indian immigrant and the first Malay commoner to become prime minister of Malaysia, Mahathir Mohamad turned the Muslim-majority Southeast Asian country into one of the developing world’s most successful economies.

During his 22 years in power, he adopted pragmatic economic policies alongside repressive political measures and showed that Islam was compatible with representative government and modernization. Abrasive and outspoken, Mahathir emerged as a Third World champion and Islamic spokesman by condemning the West, not least for trying to impose liberal democracy and neoliberal economics on developing nations.

By raising living standards and winning international acclaim, he contributed to a sense of national identity, pride and confidence among ethnically diverse Malaysians. But in mixing business and politics, Mahathir encouraged cronyism and failed to prevent the spread of corruption. Authoritarian and impatient, he jailed opponents, sacked rivals and undermined institutions as he pursued his obsession with development. In retirement, he broke a promise to stay out of politics, falling out with his two successors while using all available means to protect his legacy.

The first edition of Malaysian Maverick dramatically announced itself long before a single copy arrived in Malaysia. In advance of the book being published globally on 30 November 2009, local news outlets reported some of its juicier moments, arousing public curiosity. The reports focused on corruption and other misadventures during Prime Minister Dr. Mahathir Mohamad’s lengthy rule.

Embroiled immediately in domestic politics, Malaysian Maverick became a source of contention between the government and its critics. While the political opposition demanded a royal commission into financial scandals detailed in the book, Prime Minister Najib Razak’s administration contemplated banning it. The ensuing debate over censorship revealed a modern nation with a primitive attitude to information and an opaque bureaucratic system that has quietly consigned hundreds of books to obscurity.

With much of the discussion conducted on the Internet, the yawning gap between the past and the present, not to mention the future, was conspicuous. Word was spread by blogs and online news sites the government-owned and controlled mainstream media initially remained largely silent triggering a scramble to obtain the book. While some optimistic Malaysians ordered Malaysian Maverick from local bookshops in the hope that the government would approve it for sale, others took no chances: They bought it when abroad, conveniently in Singapore next door, and carried it home. Persons unknown, claiming to oppose censorship and committed to exposing Mahathir’s chequered record, made several attempts to post the book online, only to be thwarted by lawyers for the publisher.

Mahathir himself weighed in early, perhaps surprisingly calling for the release of the book, while at the same time threatening to sue the author, among others, for alleged libel. The government eventually cleared the book in April 2010, though not before Najib and some of his senior ministers had passed judgment on it. By that time the book was a best-seller in Singapore, boosted by sales to Malaysians, and set to repeat its success in Malaysia.

Although Mahathir did not carry out his threat to take legal action indeed, he later discounted it the controversy swirled almost endlessly. Over a period of six months, Mahathir commented on Malaysian Maverick several times, including four dedicated entries in his popular biog, while questions were asked in Parliament and civil society groups brought into the dispute.

Part I The Making of a Malay Champion

1. Politicized by War and Peace
2. An Early Introduction to Brutal Politics

3. From Outcast to Presidential Premier
4. The Vision of a Modern Nation
5. A Volatile Mix of Business and Politics
6. Scandal, What Scandal?
7. Big, Bigger, Bust
8. An Uncrowned King
9. The Perils of a Pragmatic Islam
10. A Strident Voice for the Third World
11. The Destruction of a Designated Heir

12. A Bare-Knuckle Brawl Over One Man’s Legacy
13. A Place in History