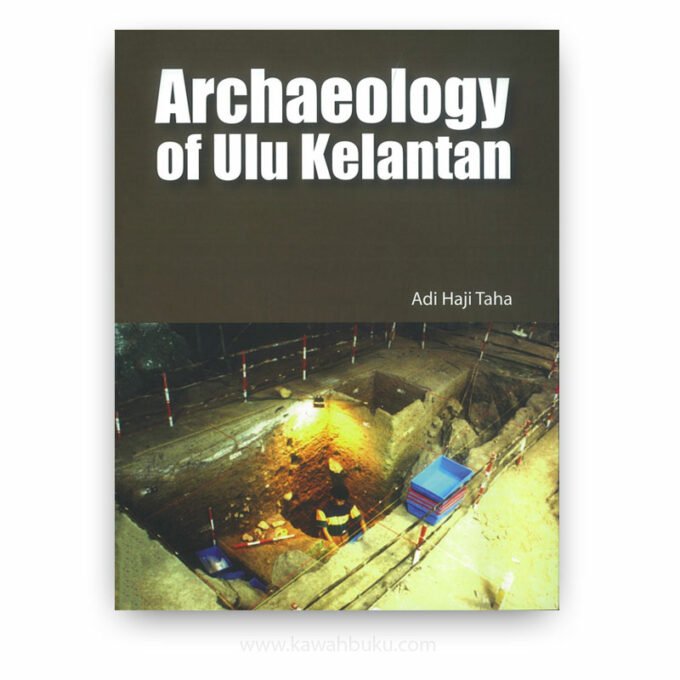 ADI HAJI TAHA is an archaeologist and holds various positions in the Department of Museums Malaysia.

Archaeology of Ulu Kelantan briefly reports on numerous cave sites previously surveyed in Ulu Kelantan and which lead to the discovery of few new sites including galleries of rock paintings believed to be the work of the Orang Asli ancestors. Two sites, namely Gua Chawas and Gua Peraling, were excavated, and the results of the excavation were discussed in detail in the book. Gua Chawas produced exciting’ evidence of the Srivijayan arts in the upper layers, the Hindu Buddhist Mahayanist tablets for offering to the deceased. Gua Peraling, on the other hand, produced much dense debris of Hoabinhian habitation extending right to the surface layers of the site. A number of Hoabinhian burials were excavated, and one, in particular, has provided new data on the biology of the Hoabinhian people.

Ulu Kelantan possesses great archaeological potential based on geographical, archaeological, and anthropological indicators. Geographically, the area is drained by a network of rivers traversing through many limestone karsts providing good shelters. Past archaeological surveys and excavations in the area provided significant evidence of early Holocene habitation through to modern times especially that of the Temiar and Semang Orang Asli who occupies the area.

Aims that are particularly emphasized in Archaeology of Ulu Kelantan is, firstly, to recover data on the economy of the ‘Hoabinhian’ and Neolithic periods of Malaysian prehistory; to study the precise nature of the local transition from hunting and gathering economy (Hoabinhian) to agriculture (Neolithic) in the Malay Peninsula, and to ascertain whether the transition was indigenous or externally-inspired (gradual or by rapid replacement); to examine comparative issues concerning occupation by hunter-gatherers of equatorial and interior rainforest environments; to examine major prehistoric developments in the Malay Peninsula technology and economy in their environmental contexts. For instance, one must ask what consequence did the change to warmer and wetter Holocene climatic conditions have on the hunter-gatherer lifestyle, and whether it was a prerequisite to the emergence or spread of horticulture.

Another important aim is to further knowledge on the origins and prehistory of the Orang Asli populations of Malaysia. The inland regions of Peninsular Malaysia are occupied by a number of aboriginal populations, referred to as ‘Orang Asli’ (“aboriginal people“) in the Malay language and in Malaysian government terminology. These groups include the hunter-gatherer Semang (or Negritos) and the agriculturalist Senoi. All the Orang Asli speak Austroasiatic languages, a language family completely different from the Austronesian family to which Malay belongs. In summarising the prehistory of Peninsular Malaysia, Peter Bellwood has suggested that the Semang and, to some degree, the Senoi populations descend from the early and mid-Holocene hunter-gatherers and agriculturalists of the Malay Peninsula, populations who have been replaced in most coastal regions of Peninsular Malaysia by incoming Malay-speaking groups within the past 3,000 years.

Many of the Senoi also had very close links with prehistoric agriculturalists in what today is central and southern Thailand, about 4,000 years ago, long before the spread of the Thai language in these regions. The issues are crucial in understanding the peopling of the Malay Peninsula, and of course subsequent inter-relationships between the peoples, languages, and cultures of the region in terms of Austroasiatic and Austronesian expansion.

In order to examine these questions, it was decided, at the start of the research described here, to excavate at least two cave sites in the basin of the Nenggiri River in the interior of Kelantan. The two sites are located within 5 to 10 Kilometres of the earlier-excavated site of Gua Cha. It was also proposed to investigate sites, both cave and open, along the Kelantan River and its tributaries, including the Lebir and Galas, which once were situated along a famous inland riverine trade route from Pattani and further north in peninsular Thailand to the southern part of the Malay Peninsula.

A major goal was to compare the Kelantan findings, from the eastern side of the Main Range, with those of Kota Tampan and other sites in the Lenggong Valley to the west, and with sites to the north in peninsular Thailand. The latter region is of significance since the evidence excavated in Gua Cha in previous studies suggests that the Neolithic inhabitants of this site and others could have acquired their pottery-making skills from counterparts in what today is part of the southern peninsula of Thailand.