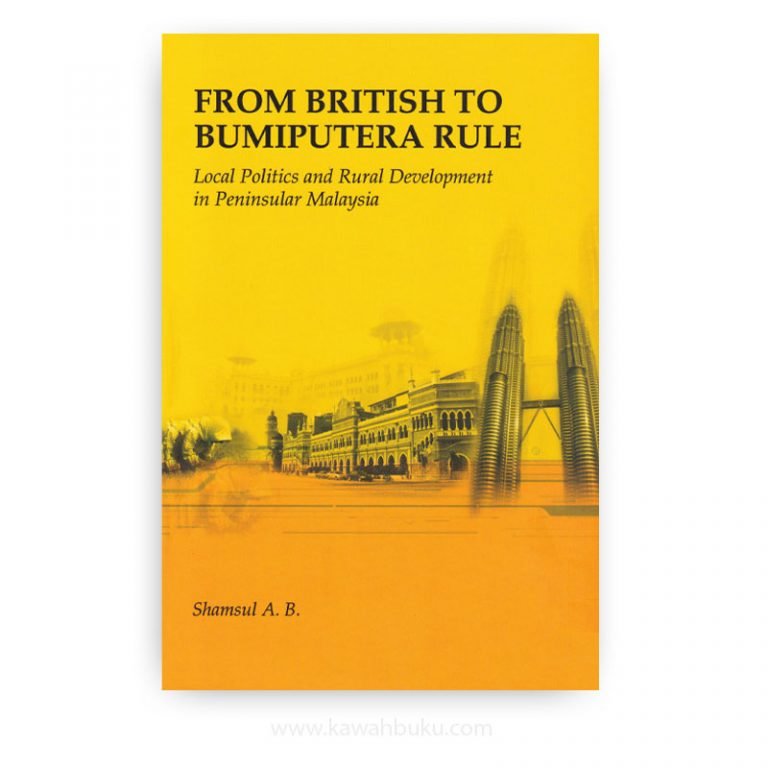 From British to Bumiputera Rule: Local Politics and Rural Development in Peninsular Malaysia

From British to Bumiputera Rule: Local Politics and Rural Development in Peninsular Malaysia deals with village politics amongst rural Malays growing oil-palm and rubber. This study traces the continuing influence of the colonial and post-colonial state policies on contemporary rural development. It shows that village political cleavages are not just the result of modern electoral practices introduced after World War II but are responses to politico-economic events at the national and even international levels. It examines not only the inter-party rivalry between the United Malays National Organization (UMNO) and Parti Islam SeMalaysia (PAS) but also the intra-party politics of both organizations at the local level.

This book is an examination of the complex interplay, at the local level, of politics and developmental processes in Malaysia. It is based on the study of a rural Malay community and combines the methodologies of anthropology and history. However, it is not simply a study of one community in Malaysia; rather it is a study of Malaysian political reality through the presentation of the social life of one rural community. More specifically, it is a study of how the implementation of development measures at the local level, before and after independence, were both shaped by, and in turn, influenced the political context in which they were applied. It has been observed that both the policies themselves, and the sometimes paradoxical local forms that they take, are the consequences of inherent tensions and unresolved contradictions, at the national level.

This study—one oriented to the social history of local politics—aims to provide a milieu for a more meaningful analysis not only of the issues of Malaysian economic development and planning but also of the operation of the Malay party politics.

Mahathir came into power when the first part of the two-year field research for this book (originally a Ph.D. thesis) had just been completed. In the second part of the fieldwork, the “money politics” trend became more obvious and was on the rise, worrying even Mahathir himself. Even though the research was not about money politics specifically but a micro-level study of the political economy of rural development in Malaysia, the ethnographic data revealed that “rural development” was viewed by those at the grassroots, especially by UMNO officials and supporters, as a major business proposition and an enormous source for wealth accumulation. Mahathir has now retired.

But the “Malaysia Incorporated” ethos he had introduced is still being practised. Indeed, it is deeply entrenched in Malaysian socio-political life, especially, amongst the Malays and UMNO. Over the last two decades, since this book was first published in 1986, “money politics” has reinvented itself into various forms serving a host of political and economic interests. The author thought for those, today, who want to know the origin and the phenomenology of “money politics”, both at the micro and macro level, within the sphere of Malaysian politics as well as its wider, structural underpinnings, this book would certainly serve that purpose.

For those who thought that 1998, the year Anwar Ibrahim was removed as the Deputy Prime Minister of Malaysia, was the height of the drama in Malay politics, this book would help them to realize that it is not. For instance, hardly a month after Anwar Ibrahim joined UMNO in early 1982, a senior UMNO politician was murdered, on 14 April 1982, by a senior cabinet minister from UMNO too. The news may not surprise the world but it did shock the nation. In the Khaldunian sense, Malay politics and the drama it produces occur in cycles and do not operate in a unilineal progression. The author is quite certain new episodes of the drama will appear in the not too distant future, perhaps more exciting than previous ones.

Preface to the Second Reprint Edition 2004
Preface
People and Places

2. Swamp to Settlement: The Formation and Consolidation of Kampung Chempaka

Be the first to review “From British to Bumiputera Rule: Local Politics and Rural Development in Peninsular Malaysia” Cancel reply