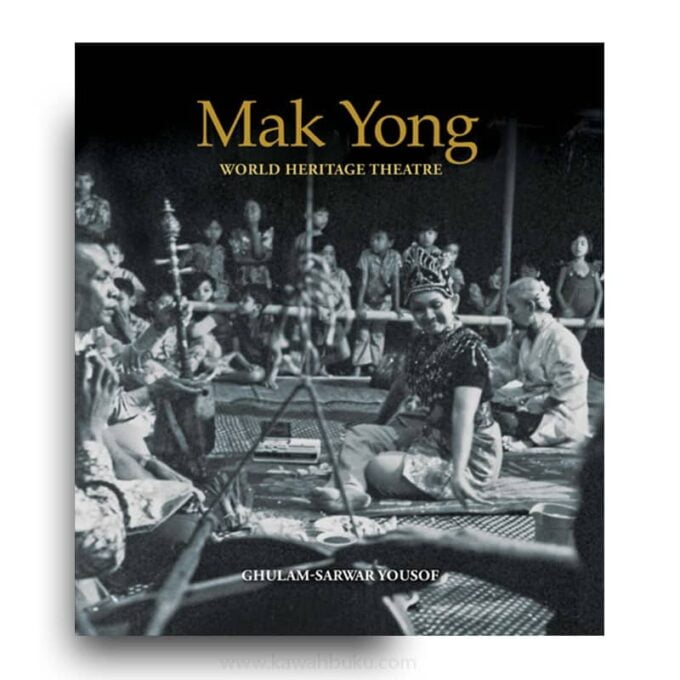 GHULAM-SARWAR YOUSOF (b. 1939) is a leading specialist in traditional Southeast Asian theatre, graduated in English from the University of Malaya (1964) and completed a Doctorate in Asian Theatre at the University of Hawai’i (1976). He is one of the world’s leading specialists of traditional Southeast Asian theatre and has written and edited more than 30 books, including the authoritative Dictionary of Traditional Southeast Asian Theatre. In recognition of his work, he was awarded the Boh Cameronian Lifetime Achievement Award (Kakiseni Malaysia) in 2008. The UNESCO listing of Mak Yong was based on the candidature file prepared by the author.

Ghulam-Sarwar Yousof’s Mak Yong: World Heritage Theatre, lavishly illustrated with 1970s photographs from the author’s fieldwork, is intended to alert the public and authorities to the importance of Mak Yong and its current state of endangerment, and to spur eﬀorts towards its safeguarding. In 2005, Mak Yong was designated a Masterpiece of Oral and Intangible Heritage of Humanity by UNESCO, and included in the Representative List of the Intangible Cultural Heritage of Humanity in 2008. The ancient dance-theatre is believed to have originated in the province of Patani in southern Thailand and the state of Kelantan in Malaysia.

Mak Yong is an ancient, ritualistic folk theatre form, which incorporates the elements of stylised dance and acting, vocal and instrumental music, song, story, rituals, and formal as well as improvised spoken text. It is performed for entertainment and for specific ritualistic healing functions, making it a mystical and sacred art. The art form emerged in the context of rural Malay society, incorporating indigenous pre-Islamic beliefs and an agrarian worldview.

Rural Mak Yong performances typically take place in the round, with no raised stage; a make-shift structure built of wood and thatched palm leaves (atap) serves as the theatre space. ‘The performances usually feature itinerant troupes of between eight and 10 performers, including four musicians, as well as Eve or six actors and actresses, each of whom assume several different roles in a performance. The story to be staged would be picked from a repertoire of 12 core plays, all of which feature as central figures minor gods or heroes descended from gods, and a wide range of other characters, both mythical and human. In ritual performances, the play is chosen depending upon the type of angin (wind or affliction) affecting a patient; portions of multiple plays might be performed on different nights, depending upon the cure needed for the patient.

Mak Yong performances were earlier staged for several consecutive nights over several weeks, but have, in recent decades, been typically held over one to three nights. Performances start late in the evening, and go on till about midnight. Ritual performances follow the same sequence of activities, with significant changes occurring during the final night, when the performance stretches till dawn, or well beyond sunrise. Typical of other rural theatre genre, no admission fee is charged for the Mak Yong performance, whether the ritual or entertainment variety.

The healing performances typically deal with angin, representing urges or desires which, if left unfulfilled, can lead to illness. A Mak Yong troupe is, therefore, commissioned to perform and bring about a cure. Overall, the pattern or organisation of each performance is unique, given that it is determined not by artistic considerations but by demands of the situation; much depends upon what is actually needed to assist the patient and, perhaps by chance rather than by design, what takes place is guided by the contingencies of the situation. No stage properties except for a few hand props are used; a Mak Yong performance, while simple, can at the same time be highly sophisticated due to its integral elements, such as the dance, music and the performance text, particularly the sung text.

The author’s hope Mak Yong: World Heritage Theatre will be the precursor to the publication and dissemination of massive amounts of his research materials on traditional Malay arts and culture that have yet to see the light of day.