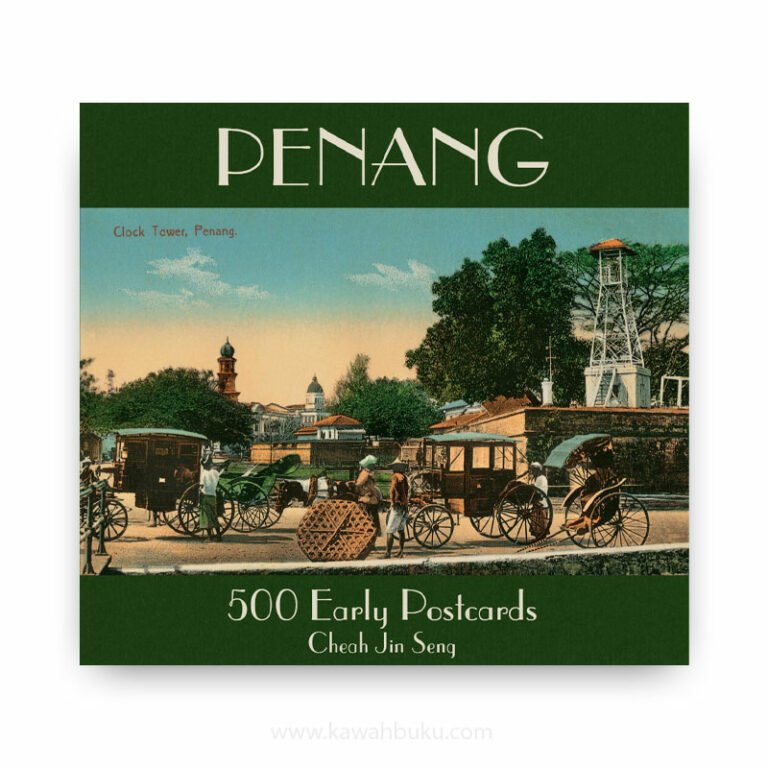 Penang: 500 Early Postcards vividly captures the charm and diversity of Penang through a diverse array of picture postcards of Penang—including of its capital George Town, now a World Heritage site—from the 1890s to the 1970s. These depict many aspects of Penang including commercial life at the island’s harbour; imposing colonial architecture; the many hotels, schools and hospitals; bustling streets with their business establishments and places of worship; transport, from rickshaws and bullock carts to trams and early motorcars; the Botanic Gardens, Penang Hill and Province Wellesley; and Penang’s colourful people. The book also includes insights into the hobby of collecting postcards.

Mail from Penang began c. 1806. In 1826. Penang merged with Malacca and Singapore to form the Straits Settlements. Postage stamps of the Straits Settlements were first issued in 1867. Penang, as part of this administrative unit, used 5S postage stamps. In 1867, the Straits Settlements became a Crown Colony. During World War I (1939-1945), Penang was invaded by the Japanese, on 19 December 1941. The Japanese Occupation lasted till 3 September 1945. Even during that tumultuous era, picture postcards were produced (albeit very few). On 1 February 1948, Penang became part of the Federation of Malaya; this was followed by independence along with the rest of Malaya on 31 August 1957. On 16 September 1963, Penang became a part of Malaysia.

The earliest picture postcard in the Straits Settlements was published in 1897 by German photographer Gustave Richard Lambert (G.R. Lambert). He opened his photographic studio in Singapore in 1867 but left the Straits Settlements in 1885, leaving the studio to the care of Alexander Koch in 1885. When Koch retired in Europe in 1905, he left the studio to the care of H.T. Jensen of the Parisian photographic studio, Reutlingers. Lambert’s studio was ultimately wound up during World War I in 1918. Both Koch and Jensen should be duly credited for many of G.R. Lambert’s picture postcards, but this is often forgotten!*

Charles Kleingrothe’s picture postcards of Penang were produced slightly later (c. 1900-1905). His picture postcards are visibly sharper, more colourful and better composed than those of Kaulfuss’s photomontages. Kleingrothe’s picture postcards are equally scarce and are shown in this collection as well. Little is known of Kleingrothe except that, like Kaulfuss, he too was German and that around 1888 he was the manager of Lambert’s branch studio in Deli, Sumatra. Within a year, he had opened his own photo studio in partnership with Herman Stafhell and by 1898, he had established his independent studio in Medan, Sumatra. He operated his studio till c. 1916 when his business succumbed to the economic downturn of World War I (1914-1918). His fate after the closure of his business in Sumatra remains unknown. Kleingrothe’s picture postcards of Penang are very distinct in appearance, and are mostly dated 1900 (the date appears after the name of the publisher), although a few are undated.

Tan Chin Kim (1882-1918), a Penangite, was also a pioneer photographer and publisher of Penang picture postcards. A chance meeting in 2009 with his last surviving child, Tan Ah Yeang who is now in her 90s provided information on the man himself and the founding of Federal Rubber Stamp Company (FRS). As he was a civil servant (he was an accountant with the Immigration Department), he was not allowed to operate a private company. He founded FRS in c. 1910, and left the business operations to his brothers, Tan Chin Hean and Tan Chin Thye, as well as other relatives. FRS had offices in Penang (Beach Street), Ipoh, Kuala Lumpur and Singapore. The Singapore and Straits Directory of 1916 listed the FRS at 168, 170 and 172 High Street, Kuala Lumpur, and at Kuala Lumpur Railway Station. Numerous picture postcards of Penang and Malaya were published by FRS from c. 1910 to c. 1910. FRS closed in c. 1940.

Nikko Studio, a Japanese photographic studio, produced picture postcards of Penang with beautiful and subtle hues. Not much is known of this studio, except that in 1916 its proprietor was K.S. Okaniwa and its address was 21 Penang Road. It operated from c. 1910 to 1940.

Nearly all the postcards featured in Penang: 500 Early Postcards are drawn from the personal collection of the author and are reproduced at, or close to, their natural size and colour. As such, the book is a valuable collector’s item as well as an important historical reference, particularly for philatelists and deltiologists.

Foreword
History of Penang and Its Picture Postcards

The Harbour
Colonial Penang
The Hotels, Schools and Hospitals
The Streets, Roads and Transport
Beyond George Town
The People
Philatelic History

Further Reading
Acknowledgements
About the Author

Be the first to review “Penang: 500 Early Postcards” Cancel reply