Kawah Buku > History > Malaysia > The Peaceful People: The Penan and Their Fight for the Forest 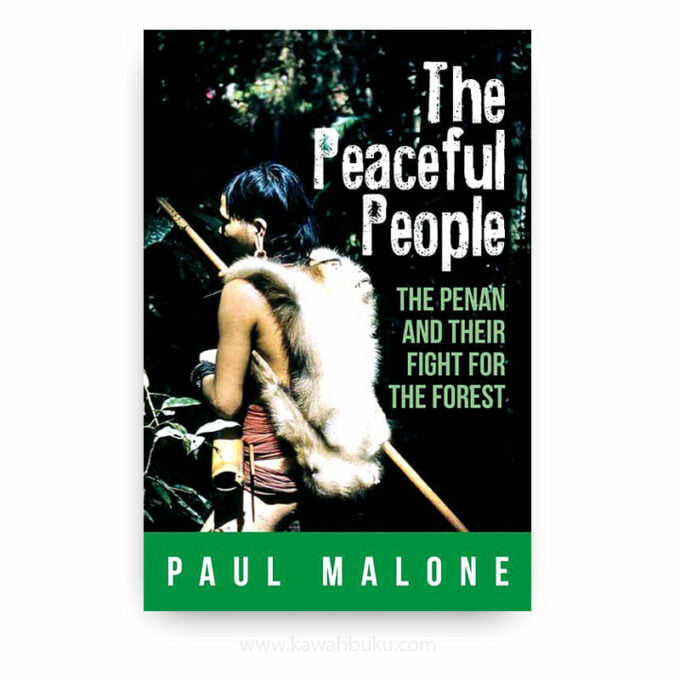 The Peaceful People: The Penan and Their Fight for the Forest

PAUL MALONE is a freelance journalist and weekly columnist for the Sunday Canberra Times, writing mainly on political and economic issues. He is currently researching a book on the Penan jungle nomads of Sarawak and working on a film script based on the life of Swiss environmentalist and adventurer Bruno Manser.

The Peaceful People: The Penan and Their Fight for the Forest is the story of the Penan, the jungle nomads of Sarawak, who for decades have fought for possession and preservation of their traditional forest lands. Drawing on extensive first-hand interviews, as well as the diaries and journals of explorers, botanists and colonial administrators, and the observations of missionaries, the book provides the most comprehensive account of the dynamics of Penan society to date. Written in a compelling and accessible style, the narrative tells the shocking history of the Penan, exposing massacres and murders, while recounting the nomads’ uniquely shy and peaceful way of life. In particular, the analysis focuses on the Penan’s consistently non-violent modern-day protests against rampant logging which attracted world attention in the 1980s and 1990s. The Peaceful People is essential reading for those interested in the history and culture of Borneo, the politics of logging and development, and the lives of indigenous peoples who seek new ways to survive in a hostile world.

The book is organised in two parts. Part I—The Way They Were—draws on early colonial records to describe the Penan traditional way of life, before turning to their 40-year campaign to preserve their forest lands. The Penan were never headhunters, but were surrounded by other more numerous, fierce tribal people, who were. Despite their gentle disposition, it is the Penan who have most stubbornly resisted loggers and dam builders in the uneven contest to preserve the forests. In the late twentieth century this battle attracted world attention but today, while the struggle continues, media interest is focused elsewhere. Part I reveals the heavy price the Penan have paid for their campaign and raises questions about the mysterious disappearance and death of key leaders of the struggle.

The book sets the scene by recounting the nineteenth-century pacification of the warlike tribes of Sarawak. It tells the disturbing history of the Penan, exposing the massacres and murders, and recounting the nomads’ long-time resistance to proposals for settlement. Although they had little by way of material goods, the authorities found it extremely difficult to convince them of the benefits of a sedentary way of life. They preferred the peace of the jungle, the hunting, gathering and sharing of everything. The extremes to which they would share left a lasting impression on many observers. One noted that if just one fish was caught, it was cooked, mashed and divided fairly. Equally, their lack of domestic violence and their refusal to kill any animal they had domesticated was noted with amazement. Animals that were normally eaten, such as a pig, would not be butchered if they were adopted. Its part of our family, Penan would say when asked why they would not sell it or eat it themselves. And when forced into settlements the nomads applied this rule to chickens that scratched around their houses, eating neither the birds nor their eggs.

Part II—Nomads No More—examines how these traditional practices have changed in recent years. Facing powerful timber companies and a state government intent on constructing dams on indigenous land, the Penan have been forced to settle. Only a small number now live nomadically. Those in the mountain villages still need and want a relationship with surrounding forests and object to the continuing encroachment and destruction, including the state government’s proposal to build a dozen hydroelectric dams. Some have tried to maintain tracts of forest by negotiation and collaboration with the government and logging companies. Others continue to confront the authorities, maintaining blockades and taking land rights actions to the courts. The decades-long campaign is an uphill battle for a people who have limited education and minimal material resources. For many what is left of the forests barely provides a subsistence living, never mind an income to hire lawyers and fight court cases. Nongovernmental organisations provide assistance and are roundly criticised by government representatives for interfering in Sarawak’s affairs. In this situation Penan leaders ask: “What choice? What choice do we have?”

All want education for their children and a secure independent livelihood. The government pushes them to be “just like everybody else”. But many want to keep at least some of their unique heritage. Theirs is not a culture with elaborate ceremonies, initiation rites, colourful dress, music and dance. No animal sacrifices appeased Penan gods. Their uniqueness lies in their relationship with the forest and in the gentle, shy way they chose to live with each other. When internal disputes arose, bands simply split up. When outsiders threatened, Penan fled the region if they could. The world can surely learn something from such peaceful people,

To enable elders to pass on something of their former lifestyle the forests surrounding present-day settlements must be preserved and the Penan must have government-recognised rights over such regions. Finalising these arrangements will not be easy as other indigenous people have claims too—claims which the timber companies often exploit to confuse and delay settlement, enabling logging to continue unabated. Ironically the Penans roaming history and minimal impact on the forest disadvantages them in proving their land claim rights. There are no Penan monuments in the forests, no cleared tracts of land showing evidence of ancient Penan farming. The Penan even had a taboo on felling large trees. But there are numerous colonial records of their presence, as this book attests. An essential step in lifting Penan socioeconomic standing must be recognition of their land rights and their special relationship with the forests. This will provide a starting point from which the Penan, with their unique qualities and way of looking at the world, can build.

PART I – THE WAY THEY WERE

2. Subduing the Headhunters
The Pacification of the Sarawak Tribes

6. The Disappearance and Death of Kelesau Naan
First Meeting
Forged Letter
What Happened to Kelesau?

9. The Government and the Penan
Datuk Hasan Sui and the Suai Penan
Corruption

14. A Changing World
Where To?

Appendix i – Tivai Pasu: Invocation on the eve of migration by Tamen Tege’