Kawah Buku > History > Malaysia > The Planter’s Bungalow: A Journey Down the Malay Peninsula 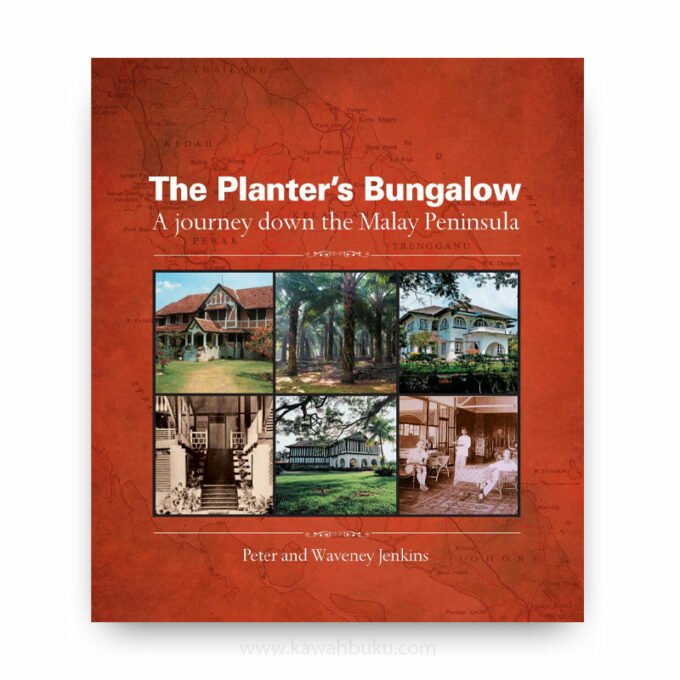 The Planter’s Bungalow: A Journey Down the Malay Peninsula

PETER JENKINS ran the Malaysian International Chamber of Commerce and Industry (MICCI), where he produced several books. Both Jenkins has spent over 40 years in Malaysia.

WAVENEY JENKINS a recognised sculptor, has long been known for her championing of the old buildings of the country through Badan Warisan Malaysia (Heritage of Malaysia Trust). She has more recently become chairman of Kandis Resource Centre, which is committed to reviving the traditional art of woodcarving on the east coast of Malaysia.

The Planter’s Bungalow: A Journey Down the Malay Peninsula does much to demystify estate bungalows and provide a refreshing and enchanting perspective on the homes of planters in Malaysia. The almost entirely expatriate community of planters and their families certainly made the most of their lives in their new homes and often challenging environment. As researchers, writers, and compilers, the authors have succeeded in compiling a brilliant collection of estate bungalows of various architectural designs found in Peninsular Malaysia. The omission of Sabah and Sarawak, as well as Terengganu and Perlis, is due to the fact that there are few if any, estate bungalows found in these states.

Some 226 bungalows have been painstakingly selected for inclusion in this book with a total of over 340 identified. This figure is very much bigger than the 30 or 40 originally estimated by Dato’ Henry Barlow, whose family owned extensive plantations in Malaya. The discovery of a much bigger number was the result of exhaustive interviews by the authors with plantation managers past and present as well as their family members, relatives, plantation staff, and friends, not only in Malaysia but also in Scotland, England, and the Isle of Man. From these interviews emerge stories, recollections, and most valuable, photographs of hitherto undiscovered traditional bungalows as well as memoirs, biographies, and other writings which are vintage plantation literature.

The selection of bungalows featured was restricted to those built before 1942, that is, before the Second World War. The book takes us on a whistle-stop tour of estate bungalows that still remained today. Most of these bungalows have undergone some form of renovation or other. The authors’ travelogue takes us on a north to south journey, each state forming a chapter in the book. A feature on God’s Little Acre, a Christian cemetery more appropriately referred to as a memorial garden, is the final chapter in the book. Located in Batu Gajah, Perak, this was where many planters who lost their lives during the emergency were laid to rest. The inclusion of this chapter is a fitting tribute to these brave men.

A special article on the historical development of the architectural styles of planters’ bungalows by renowned architect and author, Chen Voon Fee (who sadly passed away on 28 April 2008), forms the introductory chapter of the book. Readers are introduced to the historical Anglo-Indian origins of the estate bungalow right from the beginnings of its Malay roots. He traces the architectural stylistic evolution of the bungalows from ‘Malay House’, ‘Malay Transitional House’, ‘Developed Malay House’ to the ‘Mansion and Corporate House’, and the more recent ethnic and fantasy hybrids. For those not acquainted with plantations bungalows, Chen suggests that the legendary Henri Fauconnier‘s three phases of the estate bungalow, ‘the age of the little huť, ‘the age of the wooden house’, and ‘the age of the stone and cement’ serves as a preliminary guide to understanding the Jenkins’s treatment of the evolution of the planter’s bungalow.

Chen observes that the bungalows built by the legion of planters who turned the jungle into valuable estates, were as different as the planters themselves: ‘No two planters are alike, neither are the estate bungalows. The only thing they have in common is their immense solitude amidst thousands of acres of plantations.’

The succeeding chapters take the reader through a brief historical journey of the plantation industry in each state and introduce the owners of large estates, their families, and estate bungalow homes, some of which are more like mansions. Extracts of family accounts or anecdotes of life in the plantation bungalows which had been published earlier are reproduced as vignettes in the relevant chapters of the book. These provide vivid illustrations of events that took place and also serve as useful comparisons of the different eras in plantation history. Of particular historical significance are stories about the hazardous occupation of planters during the Emergency when they had to defend the estate and workers against sporadic attacks by communist terrorists.

The beautiful photographs illustrating each chapter very effectively complement and enhance the value of the book. Most of the archival and contemporary photographs are of very high quality but more importantly, they are provided with excellent captions which are detailed, highly informative, and interesting. Clearly, considerable effort and meticulous care have been taken to present the best illustrations for the different architectural styles in plantation bungalow design and construction. The photographs and captions alone may well provide an instructive pictorial guide on the evolution of plantation bungalows in Malaysia.

The Planter’s Bungalow: A Journey Down the Malay Peninsula is enriched by the name and place index, bibliography, and glossary of Malay terms used in the book. These additional features complement the text and photographs as an authoritative reference source on architectural styles of planters’ bungalows in Malaysia. The first devoted to planters’ bungalows, this book counts as a highly significant addition to Malaysiana and deserves pride of place in libraries and information centres in Malaysia and abroad.

A Note from the Authors
Prologue

1. Architectural Styles of the Planter’s Bungalow