Kawah Buku > Economics and Political Science > The Problem of Corruption 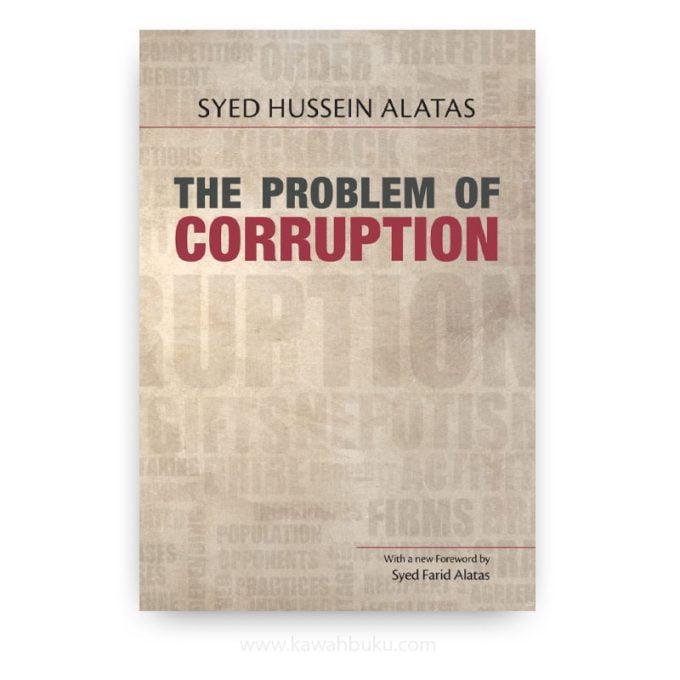 The Problem of Corruption

SYED HUSSEIN ALATAS (b. 1928 – d. 2007) was a Malaysian academician, sociologist, founder of social science organizations, and politician. He was Vice-Chancellor of the University of Malaya in the 1980s and formed the Parti Gerakan Rakyat Malaysia.

First published in 1968 under the title The Sociology of Corruption

The Other Press (Revised Edition, 2015)
156 pages including Appendices and Index

The Problem of Corruption is a well written and short treatise on the sociology of corruption by Syed Hussein Alatas, that rises far above some of the other treatises on corruption because of the thorough treatment and the theoretical insights that Alatas brings to his interpretation. It is a stimulating treatise because through his contextual approach to the subject Alatas deflates a number of hypotheses that have been put forward by a number of other investigators of the problem of corruption in underdeveloped countries.

Most of the book is devoted to a detailed examination of the nature, function, causes, and prevention of corruption. In presenting his arguments and views the author draws considerably from the existing literature on corruption and frequently points out the short-comings of various other interpretations of the problem. As he himself points out, “the aim of this monograph is not a descriptive study of corruption in any particular area, but a theoretical exploration of the phenomenon, supported by available contemporary data on corruption.”

In his analysis of the causes of corruption, Alatas challenges the alleged impact of the “gift” as a traditional cultural practice whose predisposing effect has been to further a contemporary sub-culture of corruption. He states: “That there is no significant causal correlation between the gift and corruption is proved by the fact that the expansion and contraction of corruption have nothing to do with a similar occurrence in the field of gift behavior. Furthermore, the indirect causal influence of a gift is multi-dimensional. It can turn people away from corruption, apart from attracting them to it.”

In his view, the significance is given to the “gift” institution and the role of traditional family ties should be reexamined in the light of contextual and historical analysis. There is no single cause of corruption. He subscribes to the theory of multiple factors in the causation of corruption, each of which is of varying importance, depending on spatial and temporal factors.

In the prevention of corruption, Alatas identifies some factors which mitigate corruption. These factors include the following: (1) A positive attachment to the government and spiritual involvement in the task of progress from both the public and bureaucracy. (2) Efficient administration and the proper structural adjustment of government machinery and regulation so as to avoid the creation of sources of corruption. (3) Favorable historical and sociological conditions. (4) The function of an anti-corruption value system. (5) The inspiring leadership of a group with high moral and intellectual standards. (6) An educated public opinion. And finally, he suggests that in addition to these methods to curb the growth of corruption, the dissemination of the teachings of sacral personalities against corruption can be useful in curbing corruption.

One can dispute some of the assertions and conclusions of this book but its main contribution is that it sets a format for sophisticated intellectual encounters with the complex problem, of corruption. The Problem of Corruption warrants the attention not only of the academic community but also of any person who is interested in the dynamics of modern bureaucracy, social change, and economic development.

Foreword to this Edition
Foreword
Preface

Part One The Sociology of Corruption

Part Three The Struggle against Corruption