Kawah Buku > Economics and Political Science > Anything but the Law: Essays on Politics and Economics
Out of stock 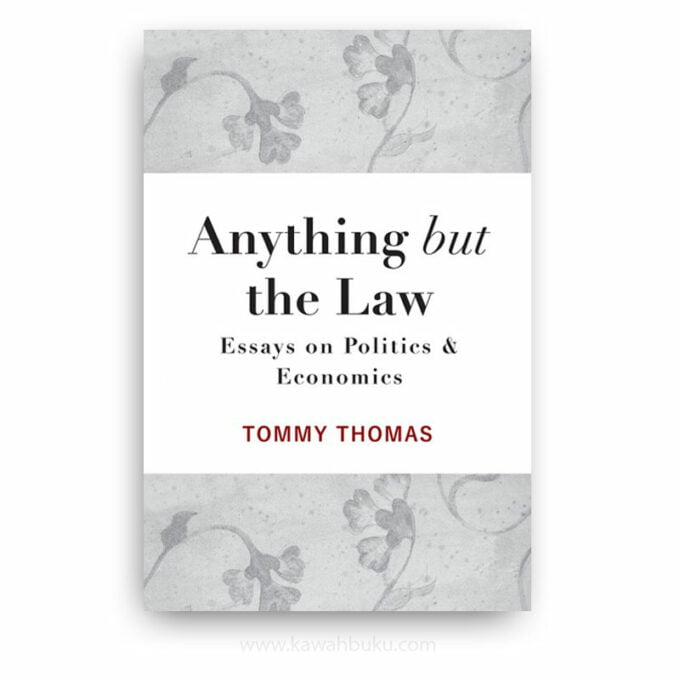 Anything but the Law: Essays on Politics and Economics

Anything but the Law: Essays on Politics and Economics is a collection of essays on political and constitutional affairs by Tommy Thomas. In this series of essays, Tommy Thomas brings together all these elements with his strong legal and political science background, his passion for history, and his no-nonsense approach in holding accountable those who control the levers of power. Through the years, Thomas also acquired a store of knowledge on economics and finance. Hence the diverse range of topics covered by him in this book ranging from the article entitled “Is Malaysia an Islamic State?” to his treatise entitled “Pillaging by US and UK Banks: Rejecting the Western Free Market Model.”

During his early years in practice, Thomas wrote for the Malaysian Bar publication, then called “Insaf“, and wrote papers for various conferences. These articles would not find their way into the mainstream media as they would have been viewed as controversial. About 15 years ago, however, Thomas became more prolific in his writings, has now found that newly established online news portals were far more independent and readily carried his views.

This book is a testament to the author’s ability to master complex and wide-ranging issues, to make sense of them, and then to present them to the readers with clarity. He often challenges views widely held even on sensitive and controversial issues. An example is the secular state debate. On this, he argues that we must look to the process involved in the adoption of the Federal Constitution to discern its character. We must not forget, he says, that “great care was taken by all in the run-up to Merdeka and the adoption of the Merdeka Constitution to achieve consensus and compromises, particularly on communal issues.”

He reminds us that the British, the Alliance Party, the Malay Rulers, and the majority in the Reid Commission, in particular, the first Prime Minister, Tunku Abdul Rahman were at pains to expressly declare that Malaya is a secular state. Prior to the formation of Malaysia on 16th September 1963, the States of Sabah, Sarawak, and Singapore were “adamant” that Islam was not going to be the State Religion of the Federation. This article was written by Thomas in 2005. The debate continues in Malaysia until today.

The same can be said of the article entitled “The Social Contract – Malaysia’s Constitutional Covenant”. In this article, Thomas traces Malaysia’s path to Merdeka and examines the post-Merdeka period in assessing if the social contract consisted of mutual promises between all! the people of Malaysia remain a reality. He asks the question of whether the politicization of Islam has damaged nation-building efforts. He reminds us that not all attacks on the social contract have resulted from religious bigotry but also from the use of the race card by some. He laments the deterioration of race and religious relations between the communities. This article was written in 2007. We face the same issue today.

Thomas also deals with matters that affect ordinary people on a day-to-day basis. “Can We Have Our Highways Back?” is one such article on the privatization of our highways leading to the people being charged tolls for the use them. This too remains a live issue as the people of Malaysia have been treated to a massive toll hike which came into effect in October 2015.

Part I: 12th GENERAL ELECTIONS — 2008
1. The Yang di-Pertuan Agong’s Prerogative in the Appointment of the Prime Minister
2. The 2008 General Elections — Crossing the Rubicon

Part II: 13th GENERAL ELECTIONS — 2013
3. 2013: Time for a New Government
4. A Caretaker Government in Negeri Sembilan
5. Blunder by Barisan/ROS — A Game Changer?
6. The Transfer of Power — What Should Happen?
7. Malaysia’s Tryst with Destiny on 5th May 2013
8. General Elections: Zimbabwe or Malaysia

Part V: THE POLITICS OF THE CONSTITUTION
16. Is Malaysia an Islamic State?
17. The Social Contract — Malaysia’s Constitutional Covenant

Part VII: ARAB SPRING
21. Dataran Merdeka is Not Tahrir Square: Malaysia is Not Egypt
22. Coups and Junta Rule Must be Condemned

Part VIII: ECONOMICS
23. Can We Have Our Highways Back?
24. American “Bankruptcy’ and Global Loss of Confidence — the Return of the State
25. The 2008 Global Financial Crisis — Origins and Response
26. Pillaging by US and UK Banks: Rejecting the Western Free Market Model
27. Is Global Capitalism on its Last Legs?