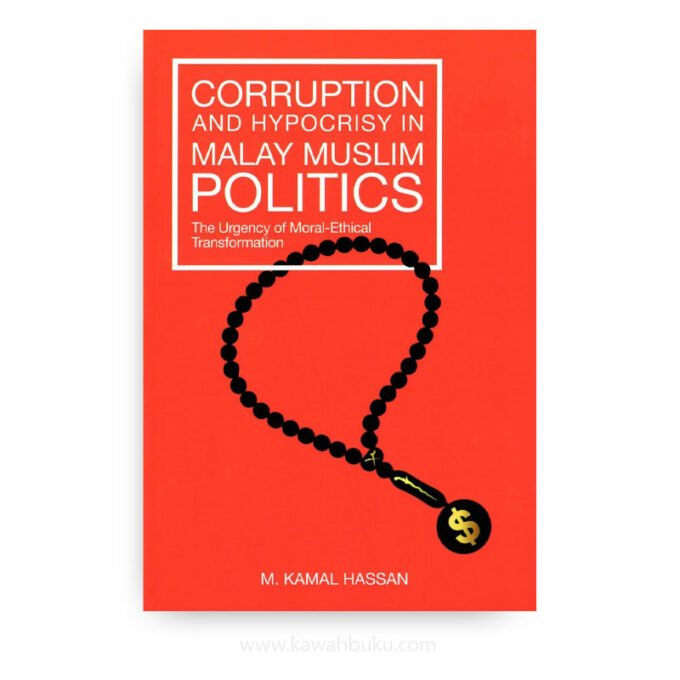 Corruption and Hypocrisy in Malay Muslim Politics: The Urgency of Moral-Ethical Transformation

M. KAMAL HASSAN (b. 1942 – ) is a Muslim academic and Islamic scholar, specializing in contemporary Islamic thought, particularly pertaining to the Southeast Asia region.

Corruption and Hypocrisy in Malay Muslim Politics: The Urgency of Moral-Ethical Transformation presents reasoned principles and guidelines which ought to be studied and implemented by Muslim leaders in order to rediscover the right path prescribed by Allah and may it lead us, our community and political leaders and followers back to a balanced harmony and compliance with Almighty God’s Purpose and Good Pleasure in our Blessed Nation and for the benefit of our well-deserving ‘Rakyat’. Looking at the phenomenon of political corruption and hypocrisy in Malay-Muslim political behaviour and culture, the author believes it is symptomatic of an inner crisis of the leaders and the followers of the political parties: the moral decay as a consequence of several factors, including the impact of materialistic modernization, the pragmatism of political parties, the materialistic and egoistic character of key political leaders, the lack of proper and sound moral-ethical education in political parties, the fear of the rise of non-Muslim political dominance, and the impact of the secularized democratic political system.

This advanced state of moral-ethical decadence requires, to my mind, a fundamental change to arrest the inner spiritual-moral decay which is manifested in unethical and hypocritical political behaviour. The damage it has done to the Muslim community and the nation is immense, while the political split and animosity of the Malay Muslims in two or three political groupings have widened and deepened. Therefore, the remedies cannot be found in superficial solutional approaches. The corrupt Malay-Muslim political culture, system and behaviour coupled with the widening disunity require urgent transformational measures. With the prospect of a more uncertain, pandemic-ridden, turbulent climate emergency, and prolonged political crisis in the country and globally, the transformation has to take place at the most fundamental levels—the spiritual, moral and ethical consciousness of political leaders, cadres, followers and supporters.

A new paradigm of leadership transformation has to be introduced because the old conventional leadership system and paradigm have failed the ummah and the nation miserably. The author calls this paradigm “Theocentric Leadership Paradigm” which is based on the Prophetic model characterised by: (a) the desire to seek the pleasure of Allah and ultimate wellbeing in Paradise (al-Jannah); (b) selflessness, humility, and mutual consultation (shūrā); (c) proper management and governance of worldly affairs as obedient, sincere and competent vicegerent (khalīfah) of Allah in accordance with the worldview of Tauḥīd (uncompromising Islamic monotheism), and non-attachment (zuhd) to earthly existence or comfort; and (d) a profound sense of direct accountability to Allah in this world and in the Ākhirah (Hereafter) reinforced with the deeply entrenched values of taqwā (God-fearing consciousness), iḥsān (benevolence, kindness, moral excellence and spiritual-moral beauty) and maḥabbah (love and devotion) of Allah.

This new paradigm of Muslim leadership will be the most important component of the indispensable Spiritual Education (Tarbiyah) Programme which includes the fundamental knowledge of the worldview of Tauhid as the springboard for the moral-ethical transformation of the Malay-Muslim political culture, system and behaviour. A crucial component of the knowledge of the worldview of Tauḥīd is knowledge regarding the Divinely-designated role and goal of the Muslim community as Ummah Wasaṭ, the chosen “Community of Justice, Goodness, Moral Excellence and Just Balance.” All efforts aimed at the betterment or progress of the Muslim community in Malaysia or in other Muslim countries, have to be redefined and reoriented towards the fulfilment of the Divinely-ordained goal of Ummah Wasaṭ at the national or local levels. It is the responsibility of the new breed of multi-ethnic Islamic leaders to sustain the political transformation of the Malaysian Muslim community and to ensure that the transformation becomes a critical strategy to reach the most preferred scenario of Ummah Wasaṭ by the end of November 2076 which would coincide with the birth of the 16th Hijriyyah century.

CHAPTER 3
“Enough Is Enough!” to the Corrupt Political System and Culture

CHAPTER 4
Transformation of Muslim Political Culture, Behaviour and Future Must Be Based Upon a Transcendent Worldview