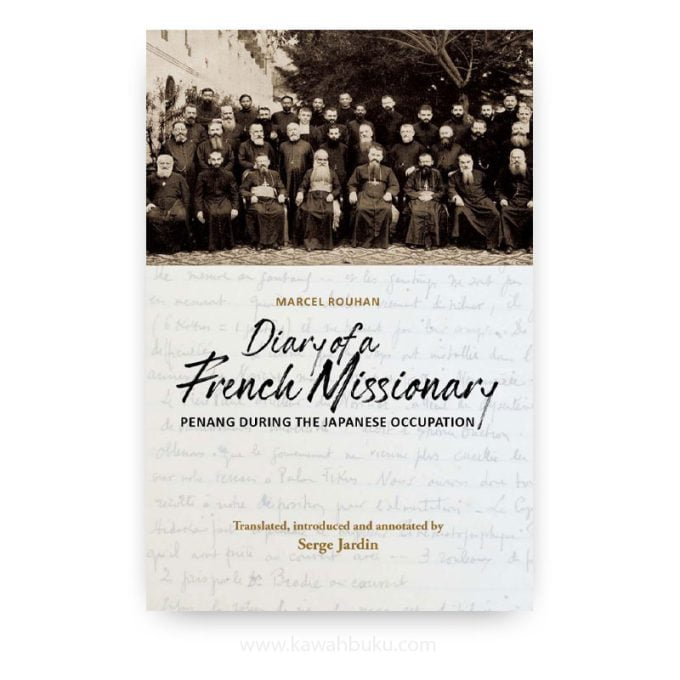 Diary of a French Missionary: Penang During the Japanese Occupation

MARCEL ROUHAN was the Director of the College General in Penang during World War Two. He also was a part of the Paris Foreign Missions Society (MEP) which was established at Kuala Kedah in 1781.

Diary of a French Missionary: Penang During the Japanese Occupation is an exceptional eyewitness account of the Japanese occupation of Malaya which was meticulously kept in a handwritten diary by Father Marcel Rouhan, the Director of the College General in Penang, during World War Two. During the Japanese occupation of Malaya, a French missionary kept a regular record of the events and experiences faced by the Fathers and students of the College General and, to a lesser extent, by the larger Catholic Community in Penang. This Diary was not an official document (administrative, diplomatic or military), but a private one. It was not meant to be published, but most probably maintained as a memoir, to aid the author’s memory in case he needed to answer questions after the war. The diary mostly dwelled on matters of daily survival in times of war, the experience of students and teachers in a religious boarding school.

War is an abnormal situation. This Diary deals with the period of the Japanese occupation and the immediate prewar and postwar periods (1938-1946). Contrary to common belief, not all the “White Men” disappeared during the war. Not all escaped before the arrival of the Japanese troops, or died fighting, or spent the war in the Changi prison in Singapore or some other prisoners’ camps. Some stayed put. Among them were the Catholic missionaries. American, British, and Canadian citizens who served as Protestant missionaries were considered enemy subjects and arrested at the start of the Japanese occupation. However, the Catholic missionaries, especially the French, were spared, because the French Government of Vichy was friendly with the Germans and, by extension, with the Axis powers. The French colony of Indochina was also friendly with Japan. Therefore, they spent the war among the local people, sharing their difficulties, their hopes and their struggles.

While most chronicles of World War Two cover the Japanese invasion, the occupation and the surrender, this Diary covers a broader period. The war did not start with the occupation and did not end with the surrender. The Diary narrates the first signs of war in 1938. After the war was over, the situation was far from satisfactory under the British Military Administration; as a matter of fact, life never reverted to the way it was in pre-war times. With the British occupation, Malaya entered a new era on 1 April 1946 as the Malayan Union.

The College General is located on Penang Island, but events and people from Malaya and beyond are mentioned. While some directors (as the teachers were called) and seminarians crossed the Penang Channel to Province Wellesley, Cameron Highlands and Singapore, the author of the Diary never left the island during the period concerned. Being the director of a Catholic institution, the writer presents a unique voice. He was not just a Neutral, but also a Frenchman and a priest. Of course, his writing carries with it the subjectivity of his background. In introducing the translation of the Diary, the translator considers it necessary to present the institution (the College General), and to introduce the document and its author,

The translator also highlights a few salient points which make the Diary a remarkable socio-historical document. The predominant thinking in times of war is Primum superesse, deinde philosophari or “first to stay alive, then to philosophise”. This was a period of insecurity that did not end with the return of the British. Primum panem, deinde philosophari or “first some bread, then philosophy’, means that the Diary dwells in length on food and husbandry, rations, prices and the black market, and sources of income. The Diary also mentions newspaper reports, radio announcements, rumours, health, leisure, transport, weather, among other issues. Finally, the Diary chronicles a Community facing historic events that would bring imminent change to the institution of the College General, as well as to Malaya.