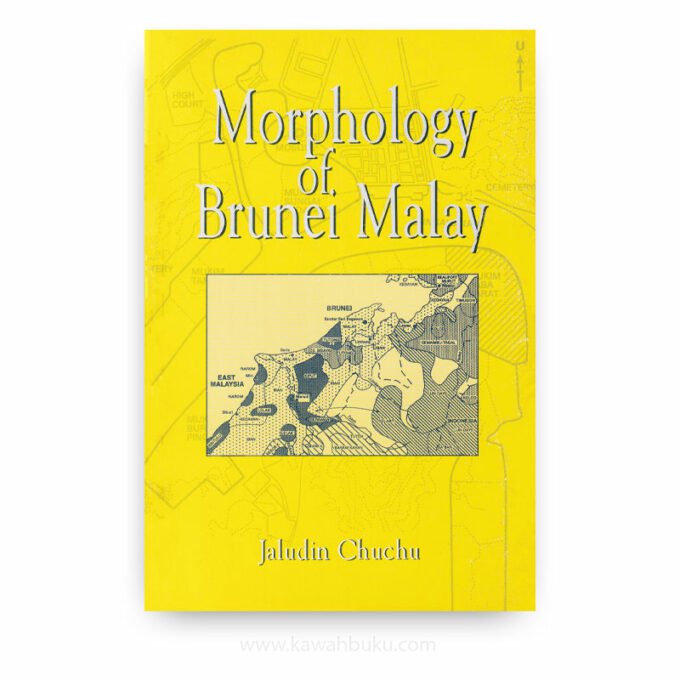 JALUDIN CHUCHU was a senior lecturer at the Department of Malay Language and Linguistics, Faculty of Arts and Social Sciences, Universiti Brunei Darussalam.

DISCLAIMER: This item is in NOS, or “new old stock” condition. It means some copies might show visible weary defects such as stained, foxed, chipped, bowed, fading, et cetera. We strongly advise the customer to view the additional photos provided to get a clear impression of the book’s condition before making purchases.

The discussion of this entire book will be based on the data appended and the author’s personal intuition as a native speaker of Kampung Ayer Subdialect. In this book, the author has sometimes relied on the format of presentation used by scholars studying Standard Malay, in particular Abdullah Hassan, Nik Safiah, and Lufti Abas. Because Brunei Malay Dialect and Standard Malay are dialects of the same language, it is important to make explicit the parallels and differences in morphology. Negara Brunei Darussalam is divided into four districts: Brunei Muara, Temburong, Belait and Tutong. Each of these districts has its own languages and dialects. Seven ethnic groups are officially recognized as puak jati (original groups). Scattered in the four districts, these puak jati speak six Austronesian languages. The Tutong language is spoken in the Tutong area; Bisaya is spoken in Brunei Muara and Tutong; Belait is spoken in Belait; Murut is spoken in Temburong; and Dusun is common in Tutong and Belait. Brunei Malay, a regional variant of Malay, is widely spoken in all four districts but mainly in the district of Brunei Muara.

Two of Brunei’s puak jati, Kedayan and Brunei, speak Brunei Malay, albeit in distinct subdialects. Apart from these, other languages, such as Chinese, Tamil, and English, are spoken by groups who have recently immigrated to Negara Brunei Darussalam. Another Austronesian language spoken in Negara Brunei Darussalam is Iban. For the purposes of this study, the author focuses on one of the Brunei Malay sub-dialects, the variant spoken in Kampung Ayer. The Malay language in Brunei can be divided into two categories: the Brunei version of the Standard Malay language and Brunei Malay dialect. Standard Malay in Brunei is very close to the Standard Malay used in Peninsular Malaysia and Singapore, especially in terms of vocabulary and syntax. One scholar has written about phonetic variation in Standard Malay in Brunei. The standard language of Indonesia is also closely related to Brunei’s standard Malay. The local dialect, Brunei Malay Dialect, has three subdialects: the Bandar Seri Begawan subdialect, the Kampung Ayer subdialect, and the Kedayan subdialect.

Brunei Malay is also widely spoken in certain parts of Malaysia, which are geographically near Brunei and were historically parts of Brunei Sultanate. These areas include Limbang in Sarawak, a coastal strip in south western Sabah, and Labuan Island at the mouth of the Brunei river. Moreover, according to James Collins, the lingua franca Malay of Sabah appears to be based on Brunei Malay. In general Bruneians are bidialectal, i.e., they speak both standard Malay and a Brunei Malay dialect. However, for Kedayans and Brunei Malays, the Brunei Malay dialect is the mother tongue while the standard Malay of Brunei is used as a second language. Moreover, many Bruneians, such as the Belait people, are bilingual, speaking their own ethnic language as well as two dialects of Malay. Brunei Malay is the major language spoken in Negara Brunei Darussalam. The speakers are found throughout the state but they are primarily located in Bandar Seri Begawan, the capital of the state and in the area of Kampung Ayer, directly across the river from the capital. The subdialect of Kampung Ayer is spoken both in the Kampung Ayer town area and in a larger area along the Brunei river. Male speakers, especially the older generation, work at such occupations as fishing, boatmaking, and silversmithing. Younger people tend to work in government offices and businesses. This subdialect is spoken by more than 25,000 people.

APPENDICES
1. Japanese Occupation
2. The Rebellion of 1963
3. History of Siamas Ward
4. Brunei’s Tradisional Cooking
5. How To Make Shrimp Paste
6. The Life of Bruneian in the Past
7. Muslim Holiday Hari Raya
8. Phonemic Inventory of BMD