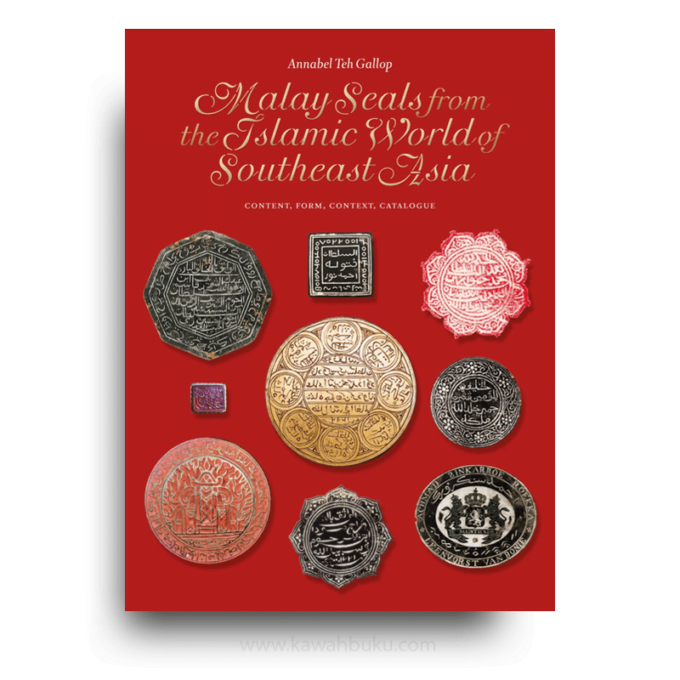 ANNABEL TEH GALLOP is head of the Southeast Asia section and curator for the Indonesian and Malay collections at the British Library. Her PhD was on Malay Seal Inscriptions: A Study in Islamic Epigraphy from Southeast Asia (SOAS, University of London, 2002), and she has written widely on Malay manuscripts, letters, documents and seals, and on the art of the Qur’an in Southeast Asia.

Malay Seals from the Islamic World of Southeast Asia: Content, Form, Context, Catalogue describes and analyses the Malay sealing tradition, carefully cataloguing more than 2000 seals sourced from collections worldwide, primarily seal impressions stamped in lampblack, ink or wax on manuscript letters, treaties and other documents, but including some seal matrices made of silver, brass or stone. These Malay seals originate from the present-day territories of Malaysia, Brunei, Singapore and Indonesia and the southern parts of Thailand and Cambodia, and the Philippines, and date from the second half of the 16th century to the early twentieth century.

Complete transcriptions and translations of the Jawi inscriptions are provided, bringing the seals to light as objects of literary and art historical analysis, and key resources for an understanding of the Malay Islamic world of Southeast Asia in the early modern period.

Seals make up an important element in the manuscript and literary culture of maritime Southeast Asia, a world long connected by political, economic, and cultural networks, the lingua franca of the Malay language, and the faith of Islam. They constitute a treasure trove of data that can throw light on myriad aspects of the history of the Malay world, ranging from the nature of kingship, the administrative structure of states, the biographies of major personalities and the form of Islamic thought embraced, as well as on developments in the art and material culture of the region.

The earliest Malay seals recorded in this catalogue are two seals from Ternate, of Sultan Khairul Jamal and his son Babullah, impressed on a letter in Portuguese to the King of Portugal in 1560 (1836, 1837). Both seals are round with fine upright calligraphy, recalling Timurid seals of the fifteenth and early sixteenth centuries, and are most likely to have been imported from the Persianate world. The most recent seals included here date from the mid-twentieth century, for with the birth of nation-states the court-centred Malay sealing tradition petered out slowly but inexorably across the archipelago.

Spread across the intervening four centuries are the other two thousand seals included in this catalogue, albeit distributed very unevenly both spatially and temporally: over a hundred seals have been recorded from the kingdoms of Kedah, Johor-Riau, and Palembang, but from the ancient State of Kutai only three seals are known.

Setting the scene: sources and studies
Content: inscriptions
Form: materiality and iconography
Context: users, uses, and usage
The evolution and development of the Malay sealing tradition

A CATALOGUE OF MALAY SEALS