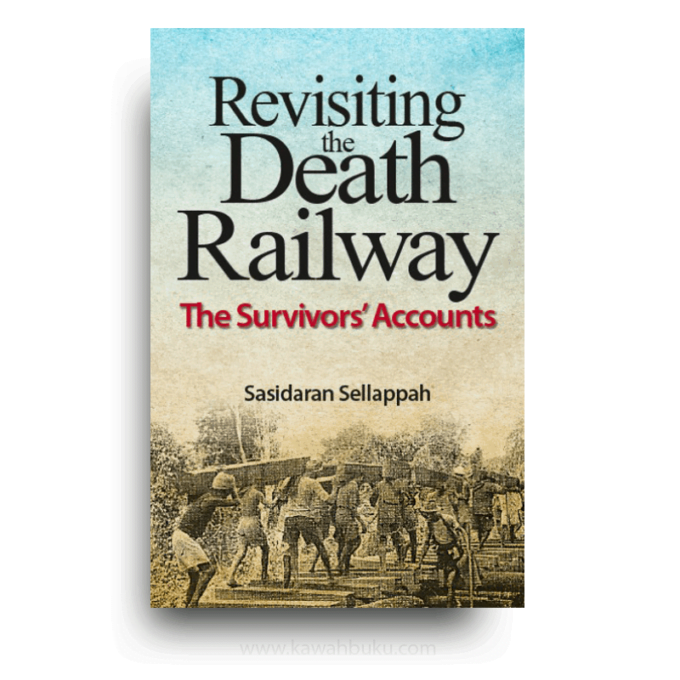 SASIDARAN SELLAPPAH is the children of the Death Railway’s survivor.

Unlike books authored by World War II veterans/POWs and renowned journalists who mainly highlighted the contribution and sacrifices of the Allied Forces, Revisiting the Death Railway: The Survivors’ Accounts provides more space for the Asian workers, especially those from Malaya then; as narrated by survivors/eye-witnesses of the Siam-Burma Death Railway during interviews with the author (2005-2013). This book also focuses on the intense trauma and hardship experienced by the general populace as a result of the Japanese invasion of Malaya and the communist insurgency thereafter as related by two prominent personages who had worked for the Japanese railway administration then.

The content of this book not only shed more light on the dreadful events during railway construction but also the unhygienic living conditions, food shortage, serious illnesses and brutal treatment of Asian workers by the captors that led to the daily deaths of workers in almost all the 70 odd camps and work sites. The information on events that transpired more than seven decades ago will certainly create greater interest, better understanding and awareness among the present generation, especially the next-of-kin of victims and those with ingrained passion for history to appreciate the relentless contribution and sacrifice by the unsung heroes who deserve to be revered in the annals of history.

Little is known among the newer generation of the suffering of the previous generations during the Japanese occupation of Malaya from 1941 to 1945. Focusing on the appalling conditions experienced by the survivors who were brought to work on the hellish Siam-Burma railway construction, infamously known as the Death Railway, Sasidaran has investigated and brought to the fore the long-term effects of the event on their socioeconomic status and psychological state. As a historian, what especially attracts me is the oral history technique employed, predominantly through interviews with some of the survivors involved with the Japanese occupiers during the railway construction. Admittedly, oral history is a little-used historical methodology that has increasingly become dormant, if not forgotten, in Malaysian history writing in recent years. The author’s attempt to utilize it in this work is, therefore, commendable.

The author’s primary purpose in taking up this work of historical value is mainly driven by his desire to instill awareness among the public of the unfortunate situation into which Asian laborers, particularly from Malaya, were dragged by the Japanese Imperialists. The enormity of the Thai-Burma railway project made it necessary for the Imperial army to forcibly conscript a huge workforce for the construction, consisting of some 62,000 prisoners of war (POWs) and more than 200,000 Asian civilians from Thailand, Burma, Malaya, French Indochina, and the Indonesian archipelago. The construction brought much pain and suffering to both the POWs and the civilians.

The death toll was incredibly high, estimated to be in the tens of thousands. Even so, there has been little acknowledgment given to the Asians, especially those from Malaya, although they formed a great proportion of the workforce. Many died as a result of strenuous labor, malnutrition, and ill-treatment by the Japanese, as the author reminds us of the survivors’ narration of these disturbing facts. He has also been able to capture their plight through first-hand accounts gathered from interviews. The author’s work is, in this regard, a tribute to their painful sacrifice and a remembrance of their tragic past. Readers would be moved by the stories contained in this work.

The author’s emotional connection to the subject is visible throughout the book. The reason is that the author was old enough to witness the coming of the Japanese to the country and the subsequent forcible labor conscription. He also witnessed his own father being recruited for the Death Railway construction and the saddening condition of his father upon his return to the country. All these have made it not merely task but also a responsibility on his part to call attention to the horrific episode of the railway construction and unspeakable torture the survivors suffered.

Be the first to review “Revisiting the Death Railway: The Survivors’ Accounts” Cancel reply