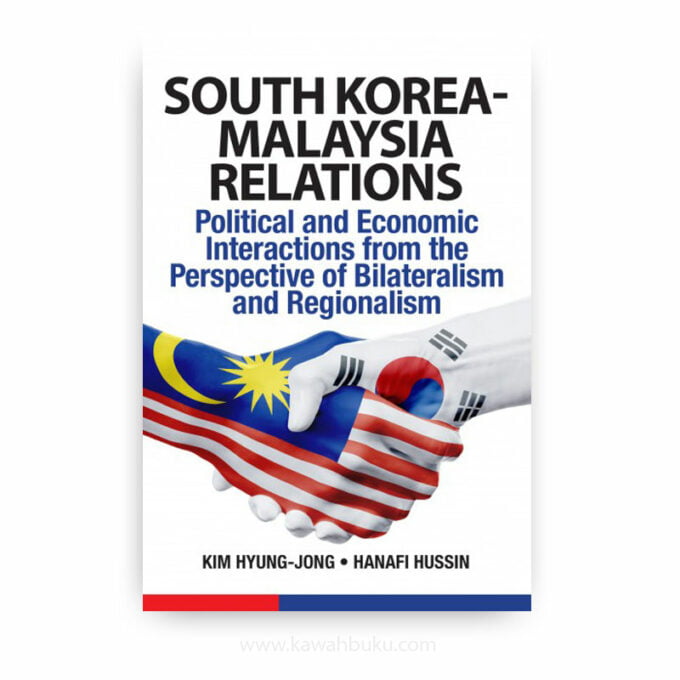 South Korea-Malaysia Relations: Political and Economic Interactions from the Perspective of Bilateralism and Regionalism

HANAFI HUSSIN is Associate Professor at the Department of South-East Asian Studies, Faculty of Arts and Social Sciences Building, University of Malaya.

The trend that two countries' relations become more important even now considering South Korea's New Southern Policy and Malaysia' Look East Policy 2.0. It is an advanced work as it contains a comprehensive analysis of bilateral relations and regionalism based on academic literature and primary resources retrieved from both countries’ archives. It would be useful for those interested in bilateral relations between the two countries and East Asian regionalism, including undergraduate students and business people.

After establishing diplomatic ties in February 1960, the two countries developed both qualitative and quantitative interactions. They did so mainly in order to pursue their own political and economic interests, as was the main trajectory of other states at the time. During the Cold War, the purpose of such interactions was to share ideologies and economic cooperation. During the post-Cold War era, both bilateralism and regionalism activities intensified and expanded in their remit: this contributed to advancing South Korea-Malaysia relations. The increased membership of the Association of Southeast Asia Nations (ASEAN) also increased the strategic value of South Korea-Malaysia relations in Southeast Asia.

By developing positive mutual recognition and economic cooperation, South Korea and Malaysia can achieve complementary relations. Malaysia has various favourable conditions that can help South Korea regain its reputation in Southeast Asia. Malaysia does not export manpower to South Korea, which distinguishes it from other Southeast Asian countries that have gained a negative impression over South Korea's alleged unfair worker treatment. Malaysia is also one of Southeast Asia's most avid consumers of popular Korean culture in its experience of the Korean Wave (or Han-ryu) — the global phenomenon of the increasing popularity of South Korean culture. Consequently, the country has a more positive image of South Korea. Malaysia's leadership in Southeast Asia and its pioneering role in establishing regionalism have made the country a critical partner for South Korea especially in developing strategies for regionalism.

The analytical framework of this study contains an overview of the concepts of bilateralism, regionalism, and multilateralism. It also introduces theoretical debates on their interactions. A type of regionalism developed by South American and African countries to establish a non-Western economic body during the 1960s-1970s was antithetical to multilateralism, yet such relationships are not contradictory when it comes to Asia. In Asia, regionalism has been limited to the Southeast Asian region in the form of ASEAN which advocated 'open regionalism'. Moreover, it is a well-known fact that the foundation and the advancement of Southeast Asian regionalism were based on bilateralism. This shows that bilateralism had complementary relations with regionalism, forming the basis of international order as well as the physical and psychological foundations for regionalism.

In the early stages of South Korean and Malaysian bilateral relations, many hurdles were faced due to geographical distance and their respective domestic circumstances—Malaysia had just gained independence whilst the Korean Peninsula remained divided. Yet they had one common ground—their purpose of establishing diplomatic relations was closely related to their nation's peculiarities. For Malaysia, recognition from the international community of its statehood was critical for its survival as a nation. It faced political threats from surrounding countries including Indonesia and the Philippines that opposed Malaysia's independence and nation-building process. In the case of South Korea, the South-North confrontation generated a diplomatic competition between South Korea and North Korea.

This book attempts to reveal reciprocal relations between bilateralism and regionalism through a study of the South Korea-Malaysia relations. It also answers the following questions:

(i) What influences do political and economic factors have on the bilateral relations between South Korea and Malaysia? At the start, the development of South Korea-Malaysia relations was politically motivated under the Cold War era. It gradually became important for both countries to establish economic cooperation in order to achieve their respective national goals including that of economic development. Economic benefits may have played a potential role in these political negotiations. This book examines such political and economic interplay in the context of South Korea-Malaysia relations.

(ii) What are the domestic and international factors that have influenced South Korea-Malaysia relations? With respect to domestic political factors, this book considers individual leadership capacity, the various political systems and economic circumstances. The fact that the development process of South Korea-Malaysia relations has been top-down in nature via attendance at the various summits under long-term dictatorships indicates that the leaders' views and leadership style would have played a significant role. This book also examines the impact of South Korea's democratisation process and the economic development achieved by both countries on their relations. As regards the international factors influencing the two countries relations, this book discusses the aftermath of the collapse of the Cold War.