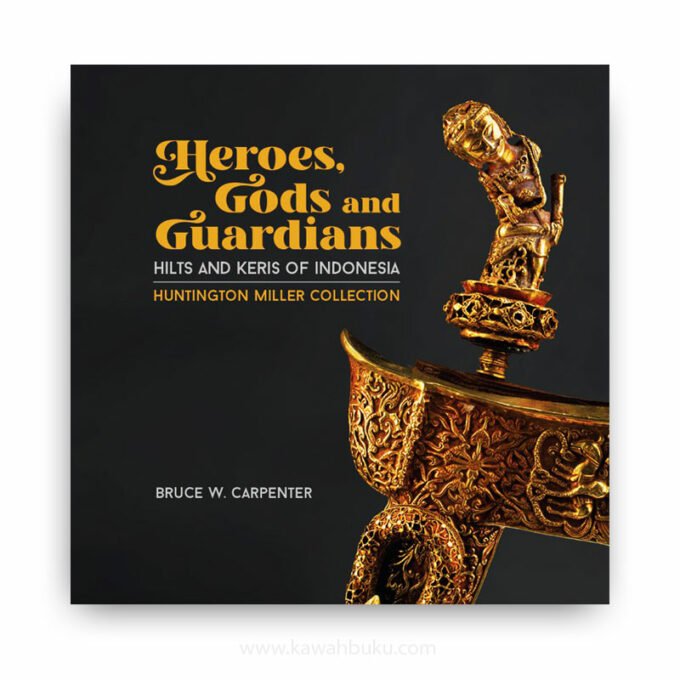 BRUCE W. CARPENTER is considered a leading expert in the field of Indonesian studies, having authored and co-authored more than 20 books and numerous articles on Indonesian art, culture and history.

Heroes, Gods and Guardians: Hilts and Keris of Indonesia (Huntington Miller Collection) emphasize the sculptural aesthetic and historical importance of this unique art form from throughout Indonesia—Java, Sumatra, Borneo, Bali, Lombok, Sulawesi—and beyond, namely keris. Put together over a period of twenty years, the Huntington Miller Collection of Keris and Keris Hilts is a tour de force. It is a story that spans centuries and the rise and fall of countless kingdoms and polities. The hilts range from minimalistic forms to the abstract to opulent royal weapons beautifully crafted to project prestige and wealth.

So, too, they carry with them the aura of mystery and magic of the exotic tropical islands of Southeast Asia, which captured the imagination of foreigners even before the beginning of the Age of Spices, when the perilous journey from Europe to Indonesia took a year to complete. With a terse and informative text written by an Indonesian art expert, Bruce W. Carpenter, this is a cultural and artistic voyage that delights the eye and stimulates the mind.

The history of the keris can be written from many perspectives, each of which, like the parable of the ‘Blind Men and the Elephant’, contains a grain of truth, yet fails to convey the whole story. Strictly speaking, keris can be defined as a type of weapon-specific to the Malay World, a rather amorphous term that includes most of Indonesia, Malaysia and Brunei and parts of the Philippines and Thailand. The original home of the keris is Java, a large and fertile island in the Indonesian archipelago. Fanciful descriptions of Java as a paradisical island in Pliny the Elder’s mammoth book, Natural History (77 CE), along with other reports, led some to speculate that Java was the home of the Biblical Garden of Eden.

Although many theorize that the first keris were forged as early as the 8th century by the iron-smiths who served the Sailendra and Sanjaya dynasties, lords of a great Hindu-Buddhist empire that rose up in Central Java, the first visual evidence of this double-edged dagger can be found ina 1 5th-century relief from Candi Sukuh on Mount Lawu (left). What is certain is that keris began taking their current form during the reign of the mighty Majapahit Empire (1293-1520 CE), which dominated much of Southeast Asia for close to two centuries. While the empire, the last of the Hindu-Buddhist kingdoms on Java, crumbled in the 16th century, the keris lived on and is still used today in Bali, Lombok, Sumatra, Sulawesi, Sumbawa, Borneo, Mindanao and the Malay Peninsula. During its migration through these lands, it evolved into myriad forms and took on new meanings and roles.

In the process of its evolution, the keris accumulated an endless sea of folklore, legends and myths. These begin with the beliefs surrounding the iron-smiths who forged the keris. Even before the rise of Java’s Hindu-Buddhist kingdoms, metallurgists, who belonged to a closed caste that zealously guarded the secrets of their trade, were viewed with awe and fear. The story of Ken Arok, the founder and ruler of the 13th-century Singosari Kingdom in East Java, clearly mirrors these views. Smitten by the overwhelming beauty of another man’s wife, Ken Arok commissions a magical keris that will win her love from the most famous keris maker in the land. However, being hotheaded and impatient, the king loses his temper when it takes too long to make, and in a fit of anger, murders the iron-smith as he holds the nearly-finished weapon in his hands. As he lies dying, the smith ominously pronounces a curse that Ken Arok and seven generations of his heirs will each be killed by the same keris.

This very dramatic and entertaining story 1s, of course, not strictly accurate; however, its value lies not in its veracity. Rather, it is a mirror that reflects the mysticism with which the people of the Malay World perceive the keris. In many cases, royal keris held in the inner palaces of Central Java have their own names. According to Bambang Harsrinuksino, with the aid of flower fragrances, keris emit subtle vibrations in order to communicate with humans. Even today, many are still convinced that every keris is imbued with magical powers—not only to cast spells but foremost to protect against malevolent supernatural forces. Again according to Harsrinuksino, keris is also potentially dangerous and require constant offerings, prayers and special care, lest they turn against their owners. Further, keris are considered sacred heirlooms (pusaka) and handed down from generation to generation. Like the great sword Excalibur, they can determine the destinies of kingdoms, lineages and great heroes by bestowing special powers, legitimacy and authority.

Ironically, despite being weapons, the most beautiful keris only had a tangential relationship with war and combat. This was because keris, with their extraordinary damascene patterns created by folding nickel and iron, were regarded as valuable objects, making their preservation a matter of the utmost importance. In truth, the keris of aristocrats were often so richly embellished, clad in gold and encrusted with precious stones, that they would have been poor weapons of war. Instead, they were intended to strike fear and awe into the enemy, causing them either to flee the battlefield or to surrender and swear their fealty. In this vein, not only the blades were revered, but also the sheaths and other accessories.

Hilts are of special relevance to the Huntington Miller Collection. The evolution of the originally utilitarian hilt into a marvellous school of miniature sculpture, comparable to Japanese netsukes, 1s breathtaking. The blossoming of imagery and styles rendered in exotic woods, animal horns, bone, ivories, shell, brass, bronze, silver and gold are wondrous. So, too, the patinas, polished by human hands over decades and even centuries. Each member of the pantheon of gods, heroes, priests, raksasa demons, celestial beings, flora and fauna has their own tale to tell. Beyond the figurative are further enigmatic forms—minimalistic, highly stylized or even abstract, many of which seem to belong more to the post-modern world.

The allure of the Dance of the Keris cast a spell on foreigners from an early date. Some, such as keris in the early curiosity cabinets of European aristocrats, artists and scholars, were seen as exotic weapons from strange, far-off peoples. Others, like a Gowa keris in the collection of the Dutch Royal House of Orange, were gifts sent by native rulers to European rulers during the Fabled Age of Spice. Keris has also always been associated with the concept of ‘running amok’, a word of Indonesian origin. The expression entered the English language alter Westerners experienced peoples of the Malay World losing their minds and attacking anyone without remorse and destroy their own homes. Westerners, too, found themselves curiously and, in some cases, dangerously drawn under the spell of Javanese mysticism, as poignantly captured in the Silent Power (de Stille Kracht), a lyrical novel published in 1900 by the celebrated Dutch author Louis Couperus.

In 2005 UNESCO honoured the keris tradition as an intangible cultural heritage. Along with wayang kulit shadow theatre, gamelan orchestras and batik, the keris stands as an iconic and unique form of Indonesian art. Beloved by collectors, keris still play an important role in the cultural fabric of Java, Bali, and beyond.

Word from the Collectors

Dance of the Keris