Kawah Buku > Biography and Autobiography > Of Political Bondage: An Authorised Biography of Tunku Abdul Rahman, Malaysia’s First Prime Minister and His Continuing Participation in Contemporary Politics
Out of stock 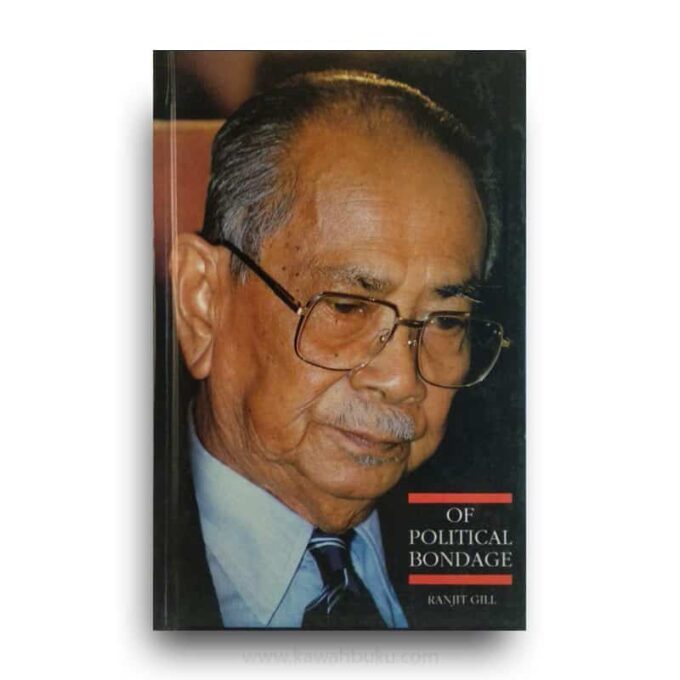 Of Political Bondage: An Authorised Biography of Tunku Abdul Rahman, Malaysia’s First Prime Minister and His Continuing Participation in Contemporary Politics by Ranjit Gill is considered as one of the treasure in literature of politics of Malaysia. There are few accolades that have not been lavishes on Malaysia’s best-known statesman, and the country’s first Primes Minister, Tunku Abdul Rahman, capping a life-time of varied achievements, from securing Independence for his country, to being part-owner of the winner of the Melbourne Cup.

Fortunately for historians the Tunku has also been a prolific writer, setting down in which he was a principal participant. Author Ranjit Gill says they provided an “invaluable source of documented information”, from which he has sketched this authorised biography, adding insights provided by a number of “Tunku watchers”—both his numerous admirers and a handful of critics. “The Tunku’s continued involvement in present day politics has brought an additional dimension to his life-long quest of helping maintain racial and religious goodwill among Malaysians,” Gill notes. “No one has worked harder to improve communal relations and if there is one individual who embodies the virtues of tolerance, it surely must be him.”

Ranjit Gill, a veteran journalist, first met the Tunku, when he was a club reporter, in 1959. “It has always been my passion to be allowed to write the Tunku’s biography,” says Gill. “When he said yes, last year, I could hardly believe my ears.”

Outstanding men inevitably leave an indelible mark upon the community of which they are a part, while their actions influence the lives of countless individuals they touch. In the case of Tunku Abdul Rahman, Malaysia’s first Prime Minister, the country’s Father of Independence and the driving force behind the formation of ASEAN , his sphere of influence has extended beyond the boundaries of Malaysia to include other regional nationals.

The author first had the honour of meeting the Tunku in 1959. As a young reporter for the Singapore Tiger Standard he was on assignment in Johore covering the forthcoming elections. He caught up with the Tunku in Segamat, and during a break in the campaign the Tunku spoke to the author for almost half an hour, seated on a bench in the tuck shop of a primary school. That interview has remained etched in the author’s memory ever since: here was the Prime Minister of Malaysia taking time off a busy schedule to brief an inexperienced reporter! Such was his kindness that the author vowed then someday to write his autobiography.

Over the years Ranjit Gill have interviewed the Tunku on numerous occasions and like many other journalists sought in vain to obtain permission to undertake an authorised biography. Imagine then he surprise when the Tunku finally agreed in September last year, at the end of an interview the author undertook on behalf of The Daily Telegraph.

Given the heightened political situation in Malaysia, the Tunku’s return to the fray after an absence of nearly twenty years and the fact that he is in his 89th year, clearly there was no time to lose. It meant dropping other research projects but the experiences of the past nine months, spent in trying to faithfully reconstruct the life and times of Malaysia’s most illustrious son of this century, have been deeply enriching.

Deciding on what to recount and which salient developments to include within the limitations of a single, small volume proved quite a task, given the rich and varied life the Tunku has enjoyed and the large shadow he has cast over the Malaysian landscape. Since the early 19505 he has played a key role in the political developments, first of Malaya and later Malaysia, and many of the policies pursued by subsequent Governments bear the hallmark of the Tunku’s long range vision and his commitment to creating a just and equitable nation which now stands poised to enter the ranks of other regional newly industrialised countries.

The Tunku has put down his many thoughts in the various book he has penned and the presence of his wealth of information has made the author;s task easier. For this he is grateful, and deeply obliged to the Tunku for his kind understanding and patience he has shown throughout this undertaking. It is these characteristics and a genuine compassion for his fellow beings that have set the Tunku apart from all those who have followed in his path

The author would like to thank, in addition to the Tunku, his many friends who provided encouragement as he laboured happily throughout this fascinating and challenging assignment. It is the author’s humble hope that Of Political Bondage: An Authorised Biography of Tunku Abdul Rahman, Malaysia’s First Prime Minister and His Continuing Participation in Contemporary Politics serves as a lasting historical record of the life and contributions of one of the most outstanding political leaders to have walked tall across the regional political stage. He was, without doubt, the most compassionate of Prime hurusters and remains, happily for all Malaysians, a fierce advocate of justice and democracy.