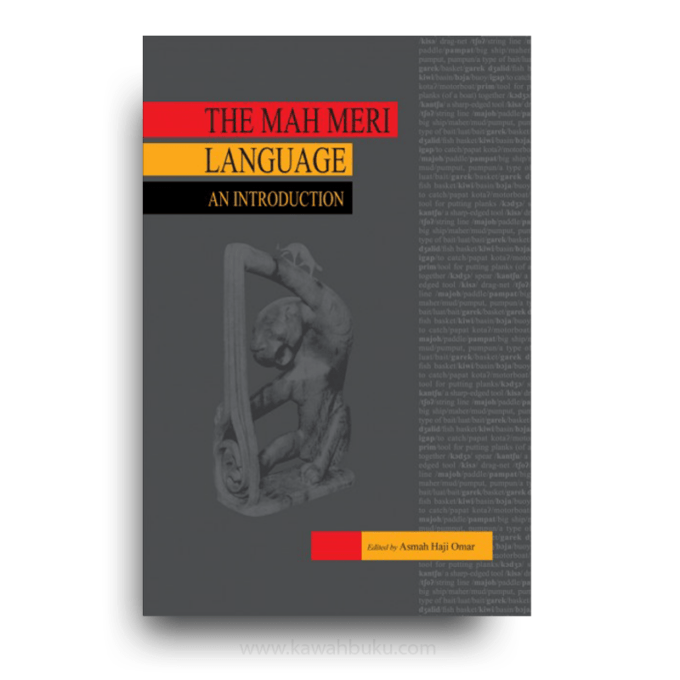 The Mah Meri Language: An Introduction

ASMAH HAJI OMAR is Professor Emeritus at the Academy of Malay Studies (AMS), University of Malaya (UM). She was formerly Professor of Malay Linguistics, Director of the Language Centre, and Dean of the Faculty of Languages and Linguistics of the university. After retiring, she was invited by the University of Education Sultan Idris, Tanjong Malim, Perak, to occupy the Za’ba Chair of Malay Civilization, and established the Institute of Malay Civilization (2001 – 2005). As a member of the Language Council of Brunei Darussalam-Indonesia-Malaysia (MABBIM) from its inception in 1972 until today, she has been involved in the development of Malay/Bahasa Indonesia, specifically in the standardization of the spelling system, formulation of rules for the coining of scientific terminology, and the method of compiling dictionaries of scientific terms.

The Mah Meri Language: An Introduction gives a comprehensive description of the systems and structures of Mah Meri, the language of a Malaysian aboriginal tribe by that name, domiciled in Kampung Bukit Bangkong, Sepang, situated to the south of Kuala Lumpur International Airport. This group has been referred to in literature written by Westerners as Besisi, but the people themselves never use this term as a label for their group or their language.

The Mah Meri Language: An Introduction is the result of fieldwork undertaken by linguists of the Faculty of Languages and Linguistics, University of Malaya, Kuala Lumpur. There has not been in existence a comprehensive study of the systems and structures of this language, in terms of phonology, morphology, syntax and the lexicon. Chapters on these topics provide a clear picture of how the language works.

Although the focus of the research conducted was language, the methodology of data collection devised for the purpose has given ample data on culture, social organization, and belief system. Analyses of linguistic aspects of the sound systems and various levels of grammar take into account the cultural meaning underlying those systems and structures as evident from many of the 19 chapters that make up the manuscript. Chapters on lexical items are presented in terms of domains those items belong to. These items together with their meanings are discussed according to the perception and reification of the speakers. In this way, one is able to identify native items vis-à-vis borrowed ones. Just like any other ethnic group, the Mah Meri have their own style of conversing with one another in various situations, and this particular topic is also included as a chapter in this book.

The Mah Meri Language: An Introduction begins with a chapter on the project and the methodology of research. The chapter that follows provides an overview of the Mah Meri language in terms of its membership in the Austroasiatic family, a reconstruction of the probability of its arrival in the Malay Peninsula based on linguistic evidence, and a general description of its systems and structures. The ethnography of the Kampung Bangkong settlement with its system of social organization, belief system, and cultural practices is given in Chapter 3. Chapters 4 to 19 are presentations of various linguistic and lexico-cultural aspects of the language.

As evident from the chapters, the language has undergone tremendous changes due to influence from Malay which the people acquire through their association with the Malays living around them, and through the national education system where Malay is the main medium of instruction. Such changes are mostly indicated in the lexicon, while native Mah Meri grammatical structures are preserved. The lexico-semantic changes are a reflection of the socio-economic development that has been taking place in the community.

The Mah Meri Language: An Introduction is not only meant for linguists but also for scholars of other academic disciplines who are interested in the study of the Mah Meri people. It is the belief of linguists that to know people one has to know their language. For this reason, the approach taken in the linguistic analysis of this language is one that is simple but discursive in nature. The application of a sophisticated theory of linguistics will defeat the purpose stated above. Illustrations in the form of maps and photographs are included.