Kawah Buku > History > Malaysia > Weapons of the Weak: Everyday Forms of Peasant Resistance
Out of stock 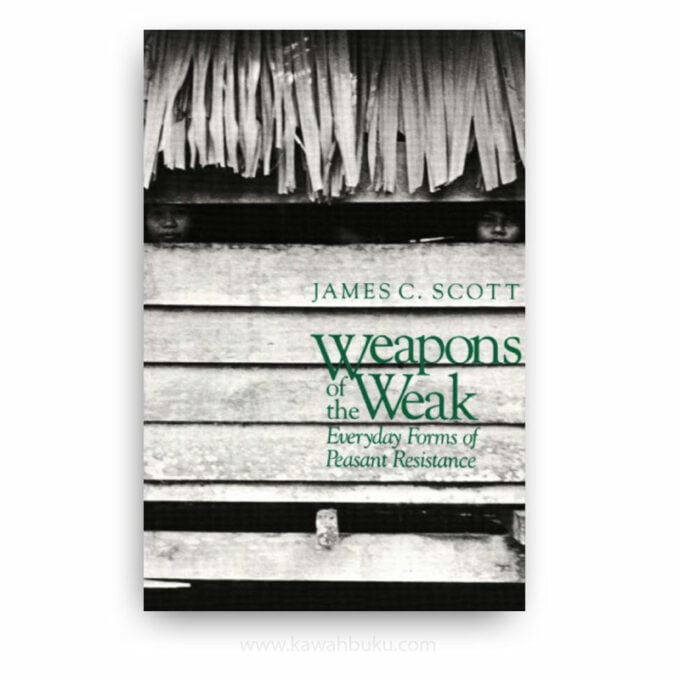 Weapons of the Weak: Everyday Forms of Peasant Resistance

JAMES C. SCOTT is a professor of political science at Yale University.

Weapons of the Weak: Everyday Forms of Peasant Resistance is a thoughtful and informed study of the social, economic, and political relations and conditions of the people of a Malay rice-growing village in Kedah as well as the application of political and social theory derived from a variety of disciplines and positions to the question of why peasants do not revolt in circumstances which otherwise would seem to justify radical action. The book is humane and, at the same time, highly disciplined. This book will doubtless stand as a landmark for many years not only in South-East Asian studies but also in the study of peasant economic and political behaviour, class consciousness, and revolutionary prospects in agricultural Asia.

The structure of Weapons of the Weak demonstrates its sophisticated integration of theory and field-work. Chapter 1 lays out in human terms the class divide of Sedaka, the fictional name was given to the village studied. Scott allows the inhabitants to speak for themselves in revealing their attitudes toward their poorer or wealthier fellows in this small community of 74 households. Then we are treated to a discussion of ‘normal’ relations in peasant societies, both historical and current, where poor peasants are not in revolt. The author draws on rich literature covering European as well as Asian and African peasant studies and literary presentations of peasant attitudes and feelings. The next two chapters set forth in some detail the economic, social, and political dimensions of Sedaka’s national and regional context and its history between 1967 and 1979 when the author began his residency there.

Chapter 5 then brings the reader to the heart of peasant relations in the village. Here we learn about the effects on different families and individuals of changing patterns of land ownership and usage, and of the introduction of new forms of mechanized and capital intensive agriculture. As almost all of these changes work to the economic advantage of the already better off, we see how the poorer villagers attempt to continue to provide for themselves and their families by hanging on to what is leftover from the profits of paddy production or by finding new forms of income outside the village. The green revolution and the introduction of the combined harvester have resulted in a much greater inequality of wealth and wider differences of moral and political perspective amongst the residents of Sedaka as they have had elsewhere in South-East Asia.

In the final three chapters, Scott analyses the ways in which ideology is used by different groups in the village to explain and justify their positions and attitudes in an evolving class conflict. The rationalization of exploitation by the wealthier who are most likely to be affiliated with the ruling political party and thus able to use the resources of the state to benefit themselves is set against the views of the poor who privately see through the hypocrisy of the public explanations they often appear to accept for their own disadvantaged position.

Ideological constructs of reality thus become part of the silent and largely hidden class war that pervades the village. However, as is made clear in the next chapter, forms of physical resistance, such as theft and apparently spontaneous collective withdrawal of labour by the poor, are also among the armoury of the weak. While these actions do not alter the distribution of wealth and power in the village, they do serve to alleviate some of the most extreme and ideologically unacceptable forms of exploitation and thus are accepted by the wealthy as well as the poor as necessary, even if not just.

The final chapter discusses the role of ideological hegemony in the maintenance of the existing class structure in Sedaka and other communities. Rather than seeing the absence of peasant revolution in this and comparable villages in Malaysia as the result of ‘false consciousness’ on the part of the poor or ideological hegemony imposed by the state or ruling class, Scott argues convincingly that while the poor peasantry can see through the ideological smokescreen that the ruling groups perpetuate, they are also capable of seeing the odds against successful revolt. The debate about the nature of ideological hegemony has advanced significantly thanks to this book.

2. Normal Exploitation, Normal Resistance
The Unwritten History of Resistance
Resistance As Thought and Symbol
The Experience and Consciousness of Human Agents

7. Beyond the War of Words: Cautious Resistance and Calculated Conformity
Obstacles to Open, Collective Resistance
The Effort to Stop the Combine­Harvester
“Routine” Resistance
— Trade Unionism without Trade Unions
— Imposed Mutuality
— Self­help and/or Enforcement
— Prototype Resistance
“Routine” Repression
Routine Compliance and Resistance That Covers Its Tracks 278
Conformity and the Partial Transcript 284
What Is Resistance?

8. Hegemony and Consciousness: Everyday Forms of Ideological Struggle
The Material Base and Normative Superstructure in Sedaka
Rethinking the Concept of Hegemony
— Penetration
— Inevitability, Naturalization, and Justice
— Conflict within Hegemony
— Trade Union Consciousness and Revolution
— Who Shatters the Hegemony?