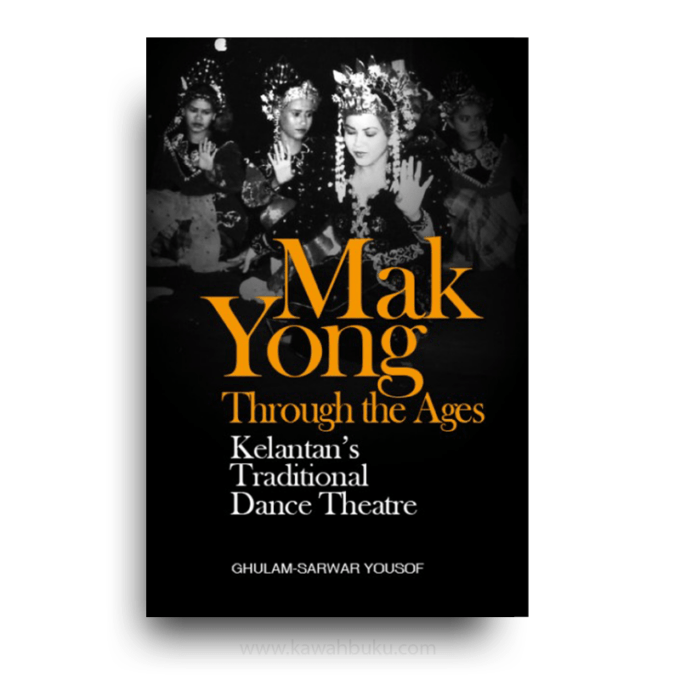 GHULAM-SARWAR YOUSOF (b. 1939 —) is a Malaysian academic and writer. He is an expert in traditional Malay and South-East Asian theatre as well as one of the leading writers of Malaysian English Literature. He was responsible to prepare the official nomination papers on behalf of the Malaysian Ministry of Culture for submission to UNESCO to gain recognition for the mak yong dance theatre of Malaysia as an Item of the Oral and Intangible Heritage of Humanity in the year 2005.

Mak Yong Through the Ages: Kelantan’s Traditional Dance Theatre comprises a selection of Ghulam-Sarwar Yousof’s essays on various aspects of mak yong presented at local and international seminars as well as published in several journals. The papers provide original and vital insights into the history, aesthetics, and functions of mak yong as well as controversies surrounding it. The papers also touch upon issues connected with the survival of mak yong and the need for efforts to preserve what the author regards as the most unique of traditional Malay performing arts.

Mak yong, the ancient Malay dance theatre form, is associated principally with the southern Thai Patani province and the Malaysian state of Kelantan on the east coast of the Malay Peninsula. It is also active in Terengganu and in the Riau Islands of Indonesia where it is staged in a significantly variant form. Mak yong comprises the elements of story, formal and informal spoken text, stylized dance and acting, vocal and instrumental music, as well as ritual. It is performed both for entertainment as well as for healing specific types of emotional and psychological ailments.

Mak yong is undoubtedly the most important of all traditional Malay theatre forms in terms of its content as well as a performance style. Following an effort to revive this near-extinct art from 1969 onwards, it went through considerable changes as it shifted away from its rural base to urban centers, particularly Kuala Lumpur. The changes essentially attempted to “cleanse” mak yong of some of the objectionable folk elements with a view to transform it into a sophisticated one intended for modern audiences, including tourists.

Mak yong, was designated by UNESCO as a Masterpieces of the Oral and Intangible Heritage of Humanity in 2005. The listing was based on the Candidature File prepared by the present author, Ghulam-Sarwar Yousof, a leading specialist in traditional Southeast Asian theatre. He was the first person in the world to work on a doctorate on traditional Malay theatre with a dissertation on mak yong submitted to the University of Hawaii in 1976.

The author first discovered mak yong in August 1969 at an international festival of traditional dance and music held at the University of Malaya. Watching that performance was an altogether strange, and in some ways ethereal experience, given that the author had studied English literature, had limited knowledge of Malay or Asian cultural traditions, and had a better grasp of the Urdu language than of Bahasa Melayu, let alone loghat Kelantan.

That would have been the end of his connections with theatre if not for drastically changing circumstances that led the author to the University of Hawaii, and to write the world’s first-ever doctoral dissertation on Malay performing arts and on mak yong at that. Thus, since 1975 the author has been in touch with mak yong in various ways, but principally through continuing research and writing about this fascinating art form, undoubtedly the most important among Malay theatre genres.

The papers in Mak Yong Through the Ages: Kelantan’s Traditional Dance Theatre explore some of the most important and interesting aspects of mak yong as theatre and as ritual, for it is both. It became clear to the author over the years that it is ritual first and then, theatre.

The topics covered include the dramatic repertoire, aspects of performance, its “spiritual” dimension, the process of modernisation that has virtually destroyed the genre, and efforts at preservation and conservation which is of great urgency in the face of mak yong‘s rapid decline in recent decades, despite recognition by the United Nations Educational, Scientific and Cultural Organisation (UNESCO) as an item of the Oral and Intangible Heritage of Humanity in 2005.

For much of what went into this writing about mak yong, the author thanks to the numerous village artists, veteran performers who had “retired” for decades when he interviewed them as well as those who inherited the mantle of mak yong following attempts to resuscitate the genre from 1970 onwards. The most significant of these personalities included Pak Hassan Jambi, Zainab Tengku Temenggung, Abdullah Awang, Abdullah Daud, and Khatijah Awang.