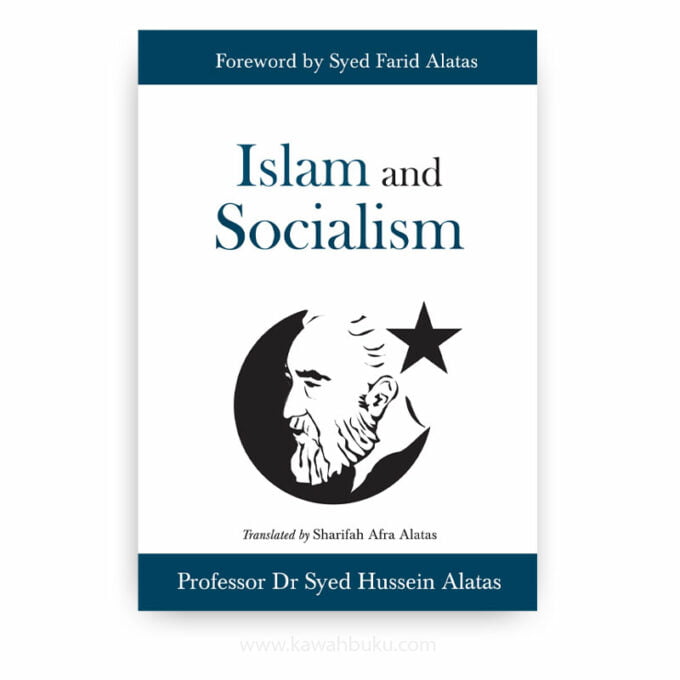 SYED HUSSEIN ALATAS (b. 1928 – d. 2007) was a Malaysian sociologist, served as Professor and Head of the Department of Malay Studies, the University of Singapore from 1967 before taking up the position of Vice-Chancellor of the University of Malaya in Kuala Lumpur from 1988 to 1991.

If you purchase this book you will earn 6 reward points!
ISBN: 9789670311777 Product ID: 26758 Subjects: Religion and Society, Sociology and Anthropology Sub-subjects: socialism and Islam, socialism and religion, translation works

Islam and Socialism cover important and critical issues, including the relationship between religion and socialism, the different types of socialism, as well as the public’s unease about the similarities and differences between socialism and communism. Most importantly, Alatas calls upon us to fight the injustices of capitalism. More than 40 years after its original publication, his ideas are still relevant today. Exploitation, alienation and corruption are the main problems affecting most Muslim countries in the modern period. The ideas of Marx and other socialists have highlighted these problems. Alatas demonstrates in this book that some of the concerns of socialists are not any different from the concerns of Muslim figures in the past. He urges Muslim societies to think deeply about socialist values and to put them into practice in order to achieve social justice.

As for this work, the essence of his thought is not new. On 7 October 1959, Utusan Melayu carried Alatas’s essay, “Erti Kemajuan Masyarakat” (“The Meaning of Progress of Society”) in which he stated that his philosophical orientation was socialism based on religion. The last few months have seen several publications that provide explanations on Islam, socialism and communism. The lack of knowledge of those who discuss these issues is obvious. Islam requires us to eradicate misunderstandings and ignorance and it is for this reason that this book was published, for the benefit of society.

Islam and Socialism is the first broad-ranging and scientific essay about this issue written by a Malaysian. In 1956, Burhanuddin al-Helmy wrote about the appropriateness of socialism in relation to Islam in a booklet entitled Ke Arah Tanah Melayu Merdeka (Towards an Independent Malaya). Since then, Muslim politicians have discussed this issue in the setting of debates between political parties, solely in popular publications. Their understanding generally lacks depth, either about Islam or socialism, or even both.

In this book, Alatas has made an important distinction between the general principles of socialism and certain socialist modes of thought, such as Marxism which is atheistic and anti-religion. The founder of Marxist thought, Karl Marx, wrote in 1844 that religion is the opium of the masses. He said: “The abolition of religion as the illusory happiness of the people is the demand for their real happiness.” His close comrade in struggle, Friedrich Engels, in his letter to Marx regarding Arabic stone inscriptions on 24 May 1853, referred to Islam as a false religion.

Alatas has refuted Marx’s dialectical materialism in many of his writings over the last 22 years. In every field, there are people who do not believe in God and religion. This does not mean that everything in that particular field has to be rejected just because there are a few people who approach that field without God and religion. There are also those who are religious. It is wrong for socialism to be equated with Marxism. There are other strands of socialism, and Alatas’s arguments are very strong. He notes that the Federal Constitution of Malaysia is not wrong just because there are people who do not believe in God but uphold the constitution.

Apart from the above, this work by Alatas is a result of the merging of Islamic principles with modern thought, from a scholar who truly understands the ideals of Islam and who is considered one of the leading scholars in Southeast Asia. His contributions to information on the coming of Islam to Southeast Asia, published in Belgium in 1962, as well as about Islam and Max Weber, published in Paris in 1963, have garnered attention from scholars abroad.

Foreword
A Note from the Publisher
Translator’s Introduction